A person in the United Kingdom ordered an iPhone 13 Pro Max as his Christmas gift. However, after two weeks of delayed delivery, he received a tampered package. 
Online shopping has become an integral part of everyone's lifestyle. While the pandemic compelled people to stay at home and use online shopping platforms to get essentials delivered, platforms such as Amazon and Flipkart have taken the online shopping experience to the next level with perks such as same-day delivery, exclusive bank deals and offers. However, as these platforms operate on a vast scale, with thousands of orders being processed on a daily basis, news about orders getting misplaced or delivery of wrong items surfaces on the internet. Most recently, a similar thing has happened with a user in the United Kingdom, who ordered an iPhone 13 Pro Max.

Daniel Carroll, a resident of Leeds, ordered a iPhone 13 Pro Max worth $1000 as a Christmas gift for himself. He placed the order on December 2, 2021, but due to stock restraints, the earliest delivery date possible on the Apple website was December 17, 2021. The day when Carroll's parcel was due to be delivered, he received multiple conflicting updates which first claimed that the item was out for delivery, then it showed that it was delayed and later that day, in delivery again. When Carroll was left clueless about the delivery of his parcel, he went to the DHL Warehouse located in West Yorkshire to collect his parcel. 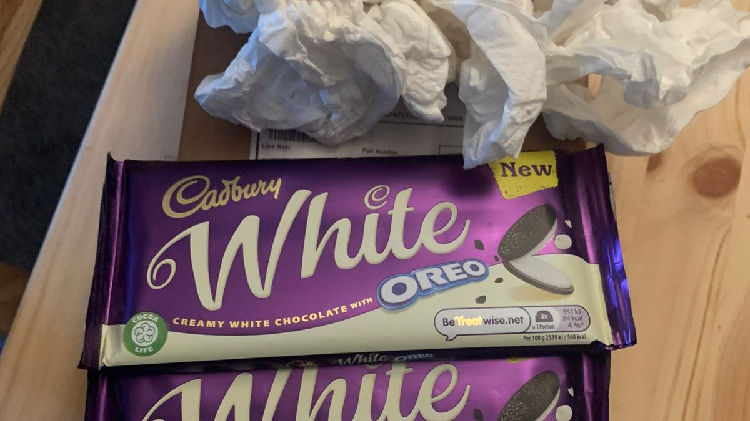 As Daniel went home with the parcel, he suspected that there was something wrong with it as the packaging tape had been tampered with. To his surprise, when Caroll opened the parcel, he found two Cadbury Dairy Milk Orea bars and industrial toilet paper inside the parcel box. Thereafter, he took to social media platforms and narrated the whole incident. Daniel wrote that "After a long weekend of a brand new iPhone 13 Pro Max being stuck in @DHLParcelUK network, failing any delivery attempt Friday-Sun, I finally picked up the parcel yesterday from DHL Leeds to find the package tampered with."

Since then, Daniel has spoken to both Apple and DHL Parcel UK. While the former said that they have not received any update from the courier partner regarding the issue, the latter responded in time, initiating an investigation into the issue. In a tweet that now seems to be deleted, Daniel mentioned that a replacement for his order has not been issued yet, leaving him disappointed. Carroll was disappointed as the iPhone 13 Pro Max was meant to be a Christmas present for him.