Dylan Schilt took to Facebook to share his interesting discovery during his exciting trek at the mountains. Take a look at the cute bear video here: 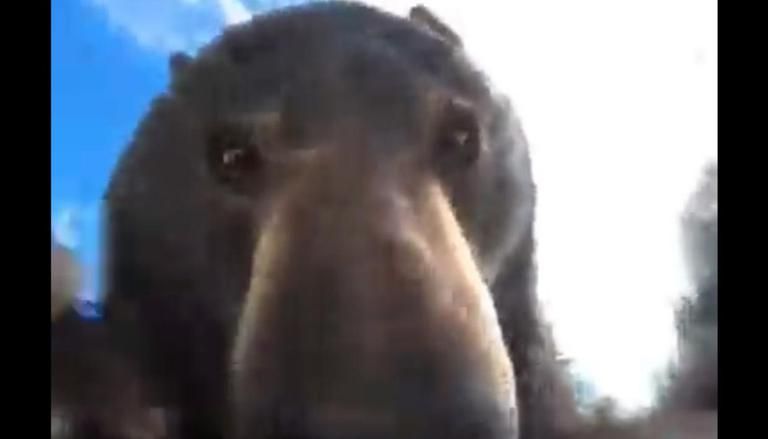 
The internet is full of engaging, funny, emotional, groovy and hilarious animal videos that leave netizens in splits or make them gush over the cuteness. One such is this cute video of a grizzly bear who took social media by storm with his amazing selfie-on-GoPro skills. He looks nothing less than a pro blogger who does not have a dearth of content to put up. Although, he might be a little forgetful to shoot and leave the camera in the bushes. The camera was located by a hiker Dylan Schilt in the snow-covered Wyoming Hills and what he saw was ‘craziest.’

Dylan took to Facebook to share his interesting discovery during his exciting trek at the mountains. "Last week when I was up archery hunting, I stumbled across a GoPro that was lost while snowmobiling," he wrote on Facebook. When he got back to camp and charged the GoPro camera Dylan couldn't believe what he saw. "After four months of it sitting there, a big old black bear found it and not only managed to turn it on but also started recording himself playing with it. Hands down the craziest thing I've ever found!" Dylan narrated in the caption he wrote along with the video. Take a look at the video here:

As the video rolls, one can see the brown bear brushing the snow off the top of the lens with his claws. He then tries to bite and pull it out while the camera continues to roll. The 26-second video has gone viral on several social media platforms. It has garnered over 4.5 million views on Twitter and over 8k views on Facebook.

The viral bear video generated a Twitter meme fest besides hilarious comments. In the comment section, some joked about how parents generally come this close to the camera while on FaceTime. Another joked that "From a bear's point-of-view, How in the darn do you use this thing?" Another wrote, "me in the bottom of a Pringles can." Take a look at the hilarious comments and quoted Tweets.

Me to the bottom of the Pringles can https://t.co/R7eyqWsYHm

POV you’re the end of a bag in some feens kitchen at 6am https://t.co/2uhyaIBS7M

pov you’re my mom & im telling you your face is too close to the camera on facetime https://t.co/cvvTazcePE