In conversation with the Official Humans of Bombay, Baba Ka Dhaba couple spoke about their child marriage and opened up on what happened after they turned 50.

Recently, a viral video of an octogenarian Delhi-based food vendor took the internet by storm and he garnered massive support on social media from netizens. Recently, the food vendor, who goes by the name Kanta Prasad, spoke to Official Humans of Bombay and revealed that he got married in Azamgarh at the age of 5 to his wife, Badami Devi (who was 3). Recalling how his wife looked during the wedding day, Kanta Prasad revealed that she looked like a doll.

'Badami came to live with me at 21': Baba ka Dhaba owner

Speaking about the wedding ceremony, Kanta Prasad revealed he and his wife thought that they were attending a party, as they wore new clothes, ate ladoos, performed rituals & went home. More so, Kanta mentioned that, back then, they had no idea they were married off and added that they always reunited like old friends when they met once a year. Furthermore, the food vendor mentioned that he and his wife later understood the responsibility of being ‘wife and a husband’ and ‘Badami Ji’ came to live with him when she turned 21. 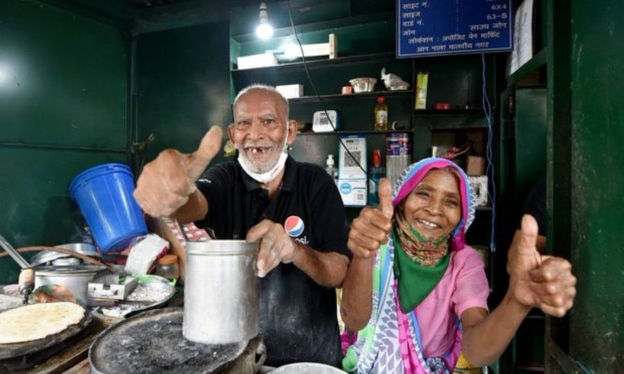 Kanta Prasad added that he and his wife together opened Baba Ka Dhaba in 1990. Adding to the same, he mentioned that his wife chops the vegetables and he cooks food in the stall. More so, he revealed that in their relationship there is no such thing like a ‘man’s job’ and a ‘woman’s job’. Kanta added that they are 50 percent partners in the business.

How Bollywood celebs reacted to the video:

Soon after Kanta Prasad’s video stormed the internet, many Bollywood celebrities rushed to the octogenarian’s aide. Sonam Kapoor, on Twitter, posted a comment on the viral video, which was shared by a Twitter user named Vasundhara Tankha Sharma. Lending her support, the actor asked the Twitter user to DM her the details of the street food vendor.

Actor Raveena Tandon, too, retweeted the viral video and asked the locals of Delhi to show some 'heart' for the street vendor. More so, Raveena Tandon also mentioned that she will share a sweet message for all those fans, who share their picture eating from the shop. Actors Suneil Shetty, Nimrat Kaur and Randeep Hooda, too, asked fans to do their bit for the elderly couple, who were located at Malviya Nagar.