The message claiming that the Government of India is providing Rs 4,000 to its citizens as part of the COVID relief scheme is false. 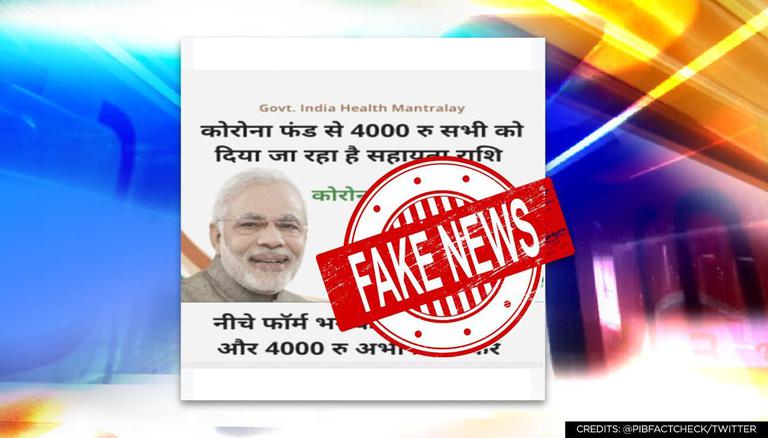 Government of India providing Rs 4,000 to all citizens under COVID relief scheme


A variety of messages do the rounds on social media every day, out of which the claims made in some of them are absolutely baseless, and more so misleading. Recently, there was one such message being forwarded numerous times which claimed that the Government of India was offering Rs 4,000 to every citizen of the country under the COVID-19 welfare scheme.

Taking to Twitter, the government has issued a clarification that the social media post is 'false'. The post shared on Press Information Bureau (PIB) handle reads, "It is being claimed in a WhatsApp message that the Indian government is, under a Corona Care Fund Scheme, giving a sum of ₹ 4,000 to everyone. This is a false claim. The government is running no such scheme."

This comes in the background of financial troubles in the country. The GDP has dipped by 7.3 percent in the last fiscal, with the last quarter clocking a growth of just 1.6 percent even after most sectors had been opened up.

In spite of all this, the Government of India has introduced a slew of measures to help citizens during the pandemic, especially the poor and the down-trodden. On June 7, PM Modi announced that his government will be providing 80 crore poor Indians free rations till Diwali. "Nobody should sleep hunger" PM Modi said today during a national address. In another nation address, he announced financial assistance to families which lost their earning members to COVID-19. The Centre, he said, is providing pensions to such families and enhanced and liberalised insurance compensation, in a bid to help them financially.