Fact Check: Schools And Colleges In India To Remain Closed Till September 30?

A message is going viral claiming that all schools and colleges in the country are being closed till September 30. However, the PIB fact check called it fake. 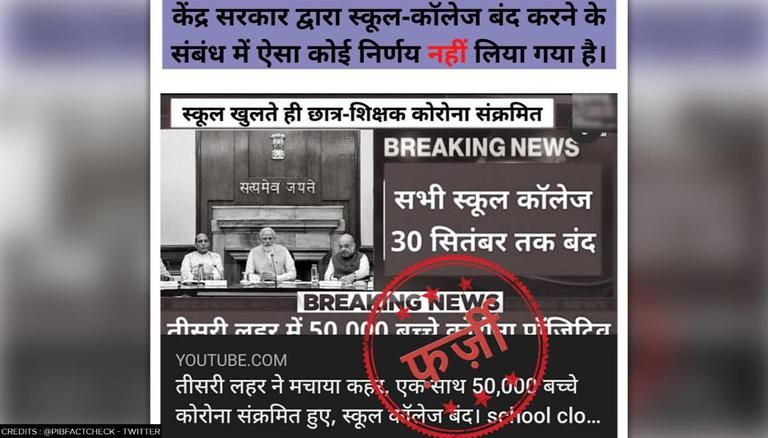 All schools and colleges in the country are being closed till September 30.


Amid the COVID-19 pandemic, the social media platforms such as Facebook, Twitter and WhatsApp are filled with fake news. Misinformation is being spread on the internet. Recently, a message is going viral claiming that all schools and colleges in the country are being closed till September 30 amid COVID third wave.

According to the message, the educational institutions are being shut due to the rise in coronavirus cases. The graphic, making the claim, carries a picture of Prime Minister Narendra Modi, Union Home Minister Amit Shah and Union Defence Minister Rajnath Singh. It also claims that 50,000 children have tested positive for COVID-19.

However, refuting the claim, the Press Information Bureau (PIB) said that the claim is fake. It informed that no such announcement has been made by the Centre.

"No such decision has been taken by the central government. The decision to open and close schools and colleges is taken by the state governments. Do not share such fake messages and pictures," PIB's Fact Check tweeted in Hindi.

In fact, schools and colleges are opening amid a decline in COVID-19 cases.

The second wave of infection has kept students away from the schools for more than six months. However, with the downfall of daily new cases, the states have decided to open schools and colleges with mandatory COVID protocols.

READ | Uttar Pradesh: Schools to reopen for classes 9 to 12 from August 16; Check all guidelines

Bihar government has reported schools on Monday after one and a half year for classes 1 to 8. In the national capital, schools are opened for senior students for practical and project-related work.

Schools in Karnataka will open for Class 9 and Class 10 students from August 23, while Rajasthan and Tamil Nadu are likely to start physical classes from September 1.