Fact Check: News that has been taking over social media profiles is that a funeral home worker from New York was cremated alive by a co-worker. Read here.

Amidst all the news that is being circulated worldwide about coronavirus, there are also some bizarre stories that are emerging on the social media portals. One of the most recent ones claimed that a funeral home worker was cremated by mistake by his co-worker. This alleged accident took place in New York.

ALSO READ | Fact Check: Did 7 Children Die In Senegal Due To COVID-19 Vaccine?

News that has been taking over social media profiles is that a funeral home worker from New York was cremated alive because of a misunderstanding by a co-worker. The report claims that the worker was exhausted from the day's work and was taking a nap on one of the stretchers. Another employee mistook him for a corpse of a 52-year-old man who had died due to respiratory disease. The report has also quoted one of the co-workers of the victim, who claimed that they heard his screams and stop the heating system but were too late. Here is a picture of the article:

Funeral home worker in New York got cremated while taking a nap.What kind of year is this?

ALSO READ | Fact Check: Are Beijing And Shanghai In China Not Affected By The Coronavirus Outbreak?

The news as given by the site Weekly Inquirer and shared by people on social media is completely false. Weekly Inquirer is a satire site and hence reports news that are false and done with the intention to provide satire on on-going topics. On the bottom left-hand side of the website, there is Disclaimer given which says that it is satire.

ALSO READ | Fact Check: Did NASA Issue An Alert About The Earthquake In Delhi Beforehand?

The news of a funeral home worker accidentally cremated was shared on Facebook as well as Twitter. In crucial times that the world is facing, it becomes extremely essential to be careful of everything that a person shares and posts on social media. Looking at the other articles on the portal Weekly Inquirer, one can understand how the source picks up various topics which are trending and interesting. The privacy policy of the site claims that the site and the articles are just for entertainment purposes.

According to Google Trends, many people have been searching for the same on the internet. The searches saw an increase on April 12 at 7.30 PM. Since then, there has been a constant rise and fall in the searches. 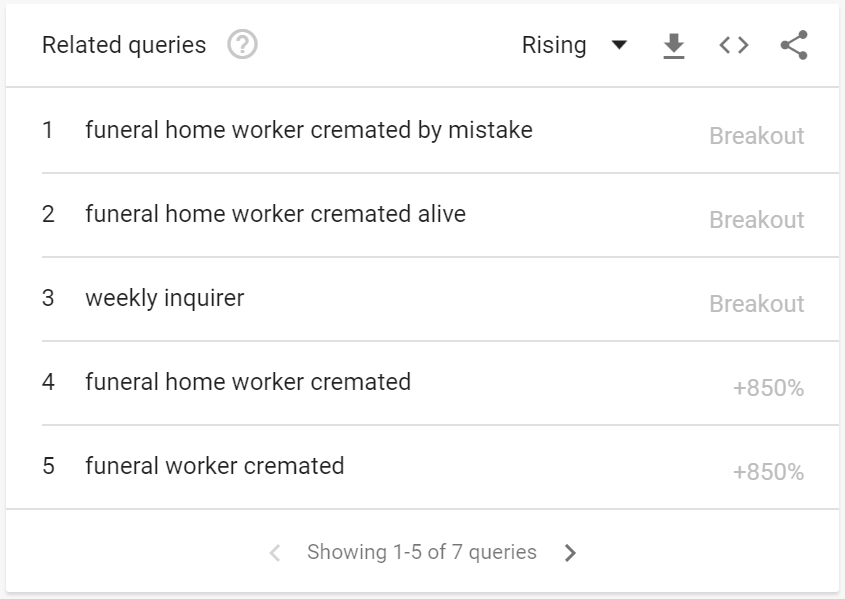 WE RECOMMEND
1 month ago
Fact check: Are Beijing and Shanghai in China not affected by the coronavirus outbreak?
1 month ago
Fact Check: Did 7 children die in Senegal due to COVID-19 vaccine?