Fact check: A viral message on WhatsApp was claiming that the pedometer application provides accurate reading of blood oxygen level, but have been proven false.

The ongoing COVID-19 pandemic has triggered a number of people to take the utmost care of their health. Thus, people can be seen taking extensive measures to take care of themselves and keep themselves same from catching the virus. During these times, some notorious internet users have also come forward and shared malicious news and applications which promote things which are either fake, misattributed or misrepresented. One such viral message has been doing the rounds on the internet which claims that a pedometer application can provide accurate blood oxygen level in a human being. Check out the message below - 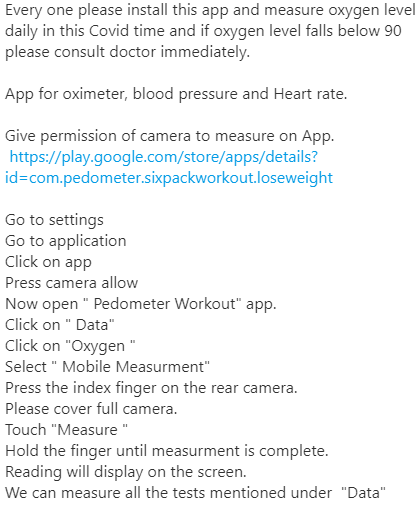 The link given in the message above has leads to the Google Play Store page of an application named 'Pedometer 2018: Step Counter & Heart Rate Monitor'. The application is actually fake and does not deliver for what it claims as a number of users have pointed out the same in the review section of the application. Check it out below - 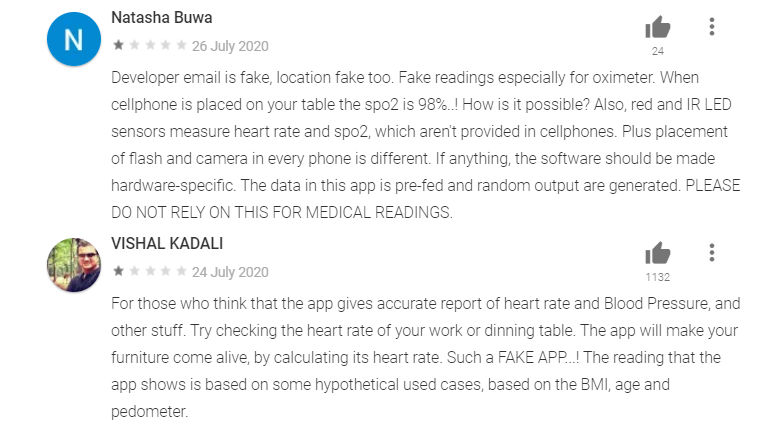 In the wake of the COVID-19 pandemic, a number of applications claiming to track accurate oxygen levels in the blood have been doing the rounds on the internet. The discussion around such applications has also gone mainstream as users wish to know whether these applications can effectively help them. But, a recent study endorsed by Trisha Greenhalgh, who is the Professor of Primary Care at the University of Oxford has cleared the air by stating that there is no evidence as of now that any smartphone technology is accurate for the clinical measurement of oxygen saturation.

The study states that furthermore in the conclusion that oxygen saturation levels obtained through such applications should not be trusted for clinical purposes. Thus, the application in question can be easily deemed fake. Read the detailed study by Trisha Greenhalgh below -

Q: Can smartphone apps be used to measure oxygen saturation?
A: No.https://t.co/iIQqi66tUM

As the message about blood oxygen tracking applications started going viral on the internet, a number of users took to Google and searched whether it was true. This resulted in a surge of search results for topics like 'Is Pedometer app safe', 'pulse oximeter app', and many more. Check out Google Trends analysis below -