Bihar's famous Ashoka Pillar & Buddha relic Stupa which has a lion statue on top, were submerged in floodwater in the latest images. 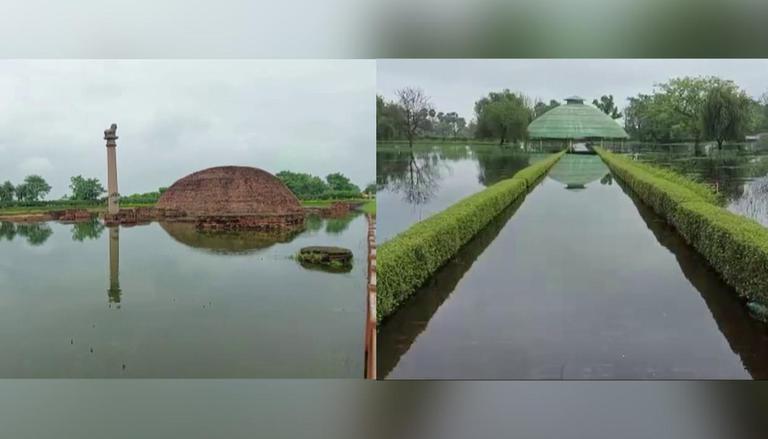 
Bihar is inundated with floodwater for several weeks. With heavy rainfall and rising river water level, several low-lying areas in the state have submerged. Amid this, pictures of Bihar’s most famous tourist spot-- ‘Ashoka Pillar’ and ‘Buddha Relic Stupa’ being submerged in the floodwaters have surfaced on the social media.

During recent severe rains, one of Bihar's key tourist sites has been flooded. Floods have hit a major Buddhist excavation site in Bihar's Vaishali district, which houses the historic 'Ashoka Pillar' and 'Buddha Relic Stupa,' according to photos sent by the news agency ANI. The famed Ashoka Pillar, which has a lion statue on top, can be seen partially submerged in floodwater. The Ashoka Pillar is a single chunk of red sandstone which stands 18.3 metres tall.

The Ganga river was at its record high in Bhagalpur where it reached 34.75 metres on August 16, beating the previous high of 34.72 metres set in 2016. Rivers across the state were above the danger mark in 26 locations. The surge in water level had additionally hit the train services in Bihar. Many trains were additionally cancelled, and routes were diverted. On Tuesday, August 31, the CM had conducted another aerial survey of flood-affected areas in three districts, Bhagalpur, Begusarai and Khagaria. To take stock of the situation in various areas, CM visited relief camps set up by the district administration.