PM Modi while taking note of the Assam Boat tragedy, expressed his condolences & assured assistance. President Kovind was also saddened for the victims. 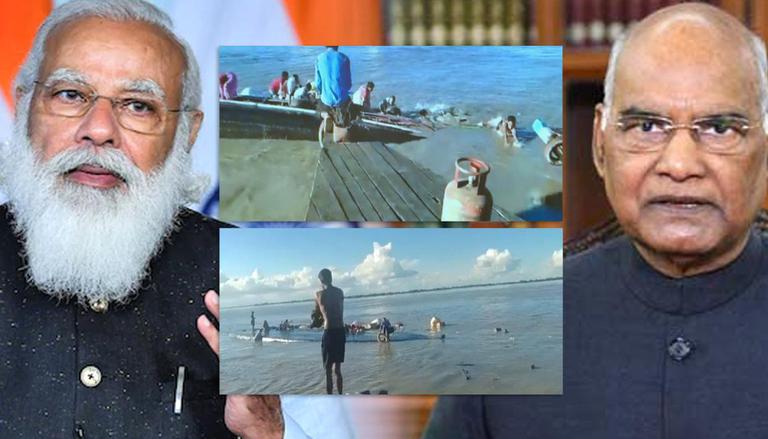 The boat collision on the Brahmaputra in Assam's on Wednesday left PM Modi saddened. While expressing his grief the PM assured of all possible assistance from his side to be made towards rescuing the passengers who still remained unaccounted for.  While offering his condolences, PM Modi said, " I pray for everyone’s safety and well-being."

President Ram Nath Kovind was also deeply pained to hear about the loss of lives in a boat accident in Jorhat, Assam. He stated, "My thoughts go out to the victims, survivors and their families." While putting out his thoughts for the ones affected by the incident on the Brahmaputra, President Kovind added that rescue and relief efforts were on to save as many lives as possible.

Union Home Minister Amit Shah dialled Chief Minister Himanta Biswa Sarma to enquire about the ferry capsize tragedy on the Brahmaputra river in Assam's Jorhat on Wednesday. He took an update on the rescue operations at the Nimati Ghat and the conditions of those rescued so far. The Home Minister assured Sarma that the Centre is ready to lend all possible help in the rescue operations.

Assam Chief Minister Himanta Biswa has confirmed the tragic accident and said that he will be visiting Nimati Ghat on Thursday, September 9. The CM also directed Minister Bimal Bira to rush to the incident site and take stock of the situation. "I am pained at the tragic boat accident near Nimati Ghat, Jorhat. Directed Majuli & Jorhat admin to undertake rescue mission expeditiously with help of @NDRFHQ & SDRF. Advising Min @BimalBorahbjp to immediately rush to the accident site. I'll also visit Nimati Ghat tomorrow," he tweeted.

READ | Assam government to form committee; prepare a roadmap for Assam Accord implementation

In a recent development by news agency ANI, it is being learnt that 40 people had been rescued out of the 120 passengers who were travelling in both the boats by the NDRF who were deployed and were currently engaged in rescue operations. According to Jorhat Additional DC Damodar Barman, at least 50 people were on board the boat which sank. Reports have suggested that the two boats were travelling in opposite directions at the same time. One of the boat was coming from Majuli, a river island, to Nimatighat while the other ferry was going in the opposite direction. The incident occurred around 4:30 pm.