Prime Minister Narendra Modi is all set to chair a high-level meeting with the National Disaster Management Authority (NDMA) and the Ministry of Home Affairs (MHA) to review the situation around cyclone 'Amphan' on Monday. According to the Indian Meteorological Department,  the cyclonic storm 'Amphan' is likely to intensify into a super cyclone within the next 24 hours and hit the West Bengal and Bangladesh coasts. Union Home Minister Amit Shah confirmed that the meeting will be held at 4 pm on Monday with the NDMA and the MHA. PM Modi is the chairman of the NDMA.

Read: Amphan' To Intensify Into Super Cyclone By Evening: MHA

To review the arising cyclone situation in various parts of the country, PM @narendramodi ji will chair a high level meeting with MHA & NDMA, today at 4pm.

In an advisory to West Bengal and Odisha governments, the ministry has said 'Amphan' (pronounced as UM-PUN) was spotted on Monday morning over the central parts of South Bay of Bengal and the adjoining central Bay of Bengal. It has been moving nearly northwards with a speed of 13 kmph during past six hours and lay centred at 0530 hours IST on Monday. The storm is very likely to intensify further into a super cyclonic storm by Monday evening.

In view of this, all people residing in the slum areas will be evacuated by May 19, Jagatsinghpur District Magistrate, Sangram Keshari Mohapatra said. He also informed that the administration is well prepared in view of cyclone 'Amphan'.

Amphan is very likely to cross West Bengal-Bangladesh coasts between Digha (West Bengal) and Hatiya Islands (Bangladesh) during the afternoon or evening of May 20 as a very severe cyclonic storm with a maximum sustained wind speed of 155-165 kmph gusting up to 185 kmph, an official said to PTI. Heavy to extremely heavy rainfall, accompanied by high-speed winds and tidal waves are expected in the region. 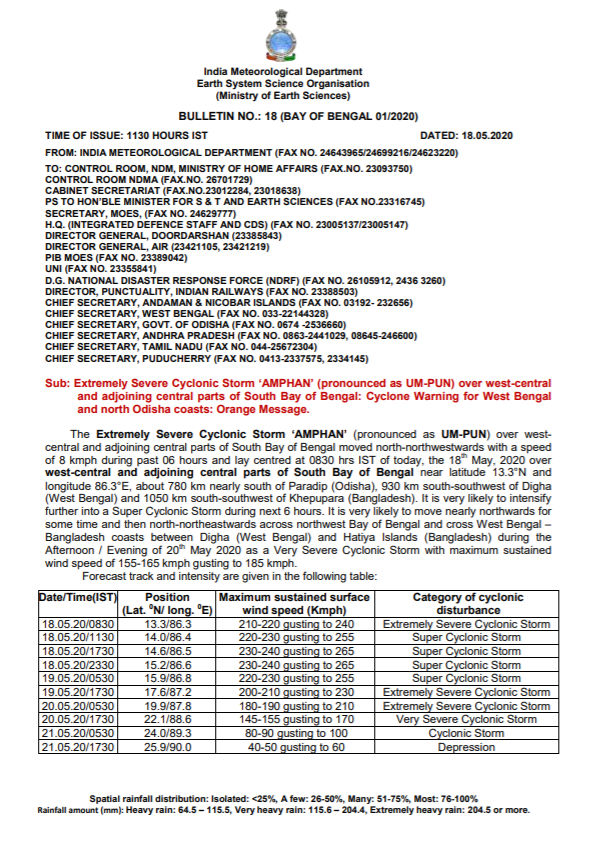 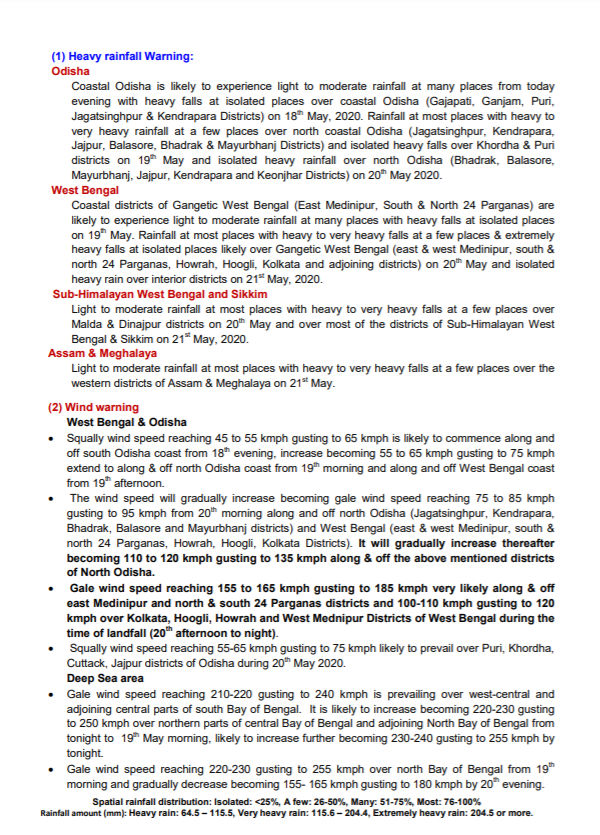 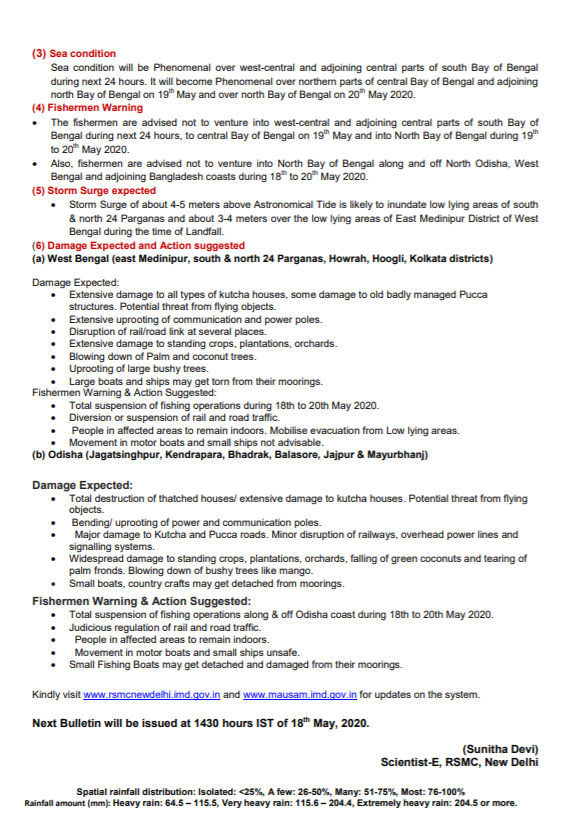 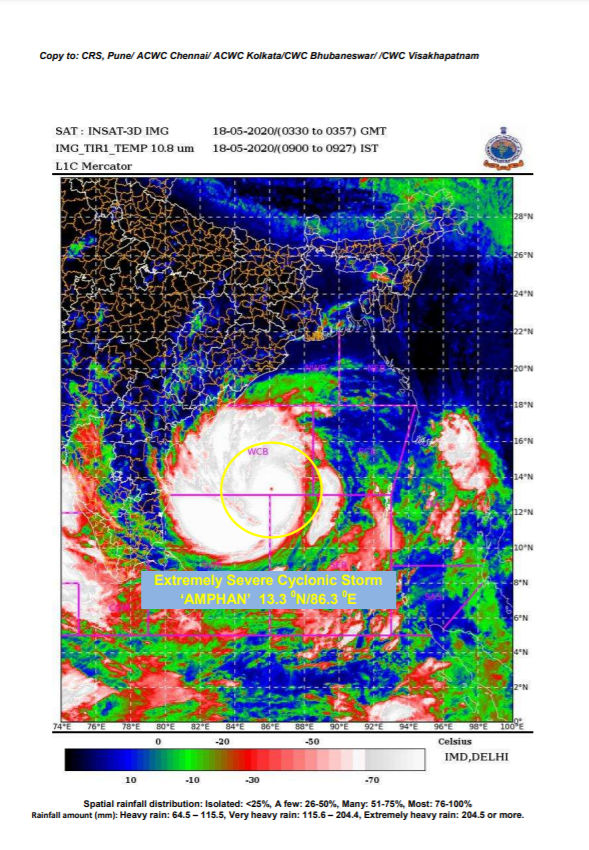 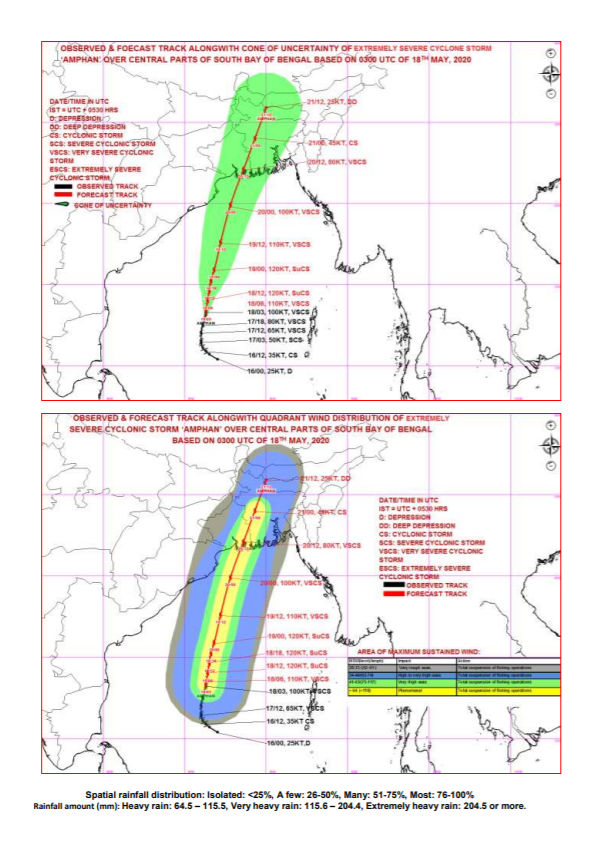 Read: Heavy to extremely heavy rainfall, accompanied by high speed winds and tidal waves are expected in the region.