A red alert has also been issued for four districts of Tamil Nadu including Chennai, Thiruvallur, Kanchipuram, and Chinglepet amid heavy rainfall. 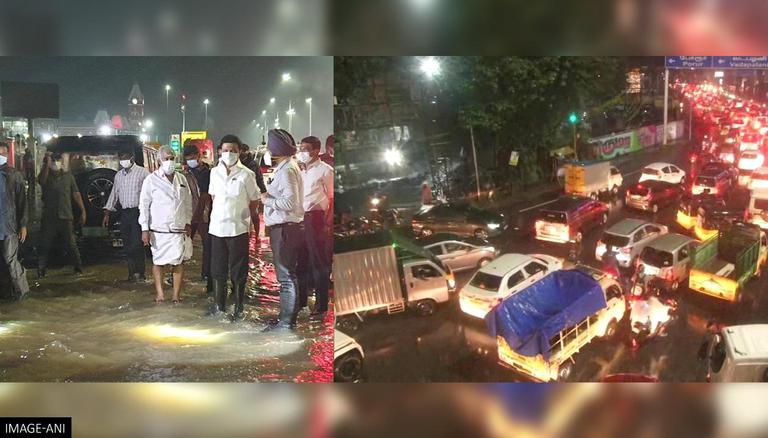 
As Tamil Nadu continues to reel under heavy rainfall and flooded roads, Chief Minister MK Stalin late on Thursday night paid a visit to the Flood Control Room of the Greater Chennai Corporation. The CM not only reviewed the rain, relief, and rescue works currently underway in various parts of the city, he also paid a visit to flood-affected regions.

Meanwhile, Chief Minister MK Stalin's visit came shortly after the heavy rain caused a heavy traffic jam at the Chennai Mount Road on Thursday leading to stranded vehicles and people. Along with several roads and subways flooded with water, people were seen struggling to manoeuvre their vehicles. Following such a situation, the Chennai metro services were also extended by an hour till 12 AM for helping passengers reach their homes safely.

In view of the situation, the Tamil Nadu CM has also given directions to set up a 24x7 control room and relief centres for extending help to the people. He also urged the people to take stay indoors and step out only when required. Taking to Twitter, he wrote, "I urge the public to carefully plan their travels and adhere to the rainy season guidelines."

Being called one of the heaviest rainfall in recent years, a red alert has also been issued for four districts of Tamil Nadu including Chennai, Thiruvallur, Kanchipuram, and Chenglepet. Informing about the same, State Revenue and Disaster Management Minister KKSSR Ramachandran said that three people have also died due to rain-related incidents.

Acting upon the situation, the Greater Chennai Corporation Commissioner Gagandeep Singh Bedi has assured about monitoring the situation while 145 pumps are being run across all the zones for removing stagnant water as heavy rainfall and flooding has also resulted in the closure of several subways further adding more to the traffic congestion.

Meanwhile, according to the India Meteorological Department (IMD), Chennai's MRC Nagar has received the highest rainfall across the state followed by Nungambakkam, YMCA Nandanam, and Meenambakkam. The IMD has also predicted isolated heavy to heavy rainfall to continue over the north coastal Tamil Nadu and adjoining areas over the next three days.