'10 metres boundary wall of a nearby ATS society has been damaged after being hit by the debris of Supertech Twin Towers', informed Noida Authority CEO 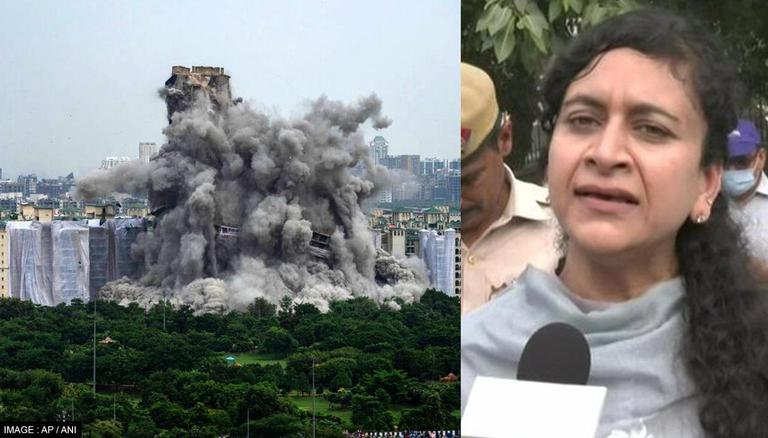 
In the historic demolition witnessed on Sunday, the Supertech Twin Towers in Sector 93A of Noida were razed down to the ground in 9 seconds. There appeared to be no damage to the buildings adjacent to the twin towers following the demolition. However,  the CEO of Noida Authority Ritu Maheshwari informed that a 10-metre boundary wall of a nearby ATS society was damaged after being hit by the debris. Other than that, no other residential buildings have been affected by the blast, she added.

"10 metres boundary wall of a nearby society, ATS has been damaged after being hit by the debris. No information of damage from anywhere other than this has been received", CEO Noida Authority Ritu Maheshwari told ANI.

10 metres boundary wall of a nearby society, ATS has been damaged after being hit by the debris. No information of damage from anywhere other that this has been received: Ritu Maheshwari, CEO Noida Authority pic.twitter.com/UwiDkZO3qx

She further informed that the planned demolition of the Supertech Twin Towers was successful. The cleaning work is currently underway and supplies restoration will start soon. Air quality Index (AQI) is being monitored and the data will also be released. "Pre and post-demolition AQI data is almost the same. Around 7 p.m., the residents of nearby vacated societies will be allowed to go back to their homes. Around 100 water tankers and 300 cleaning staff have been deployed here", she added.

Also Chetan Dutta, the Indian blaster who pressed the power button to demolish Supertech Twin Towers also confirmed that the debris of the towers fell on the side of the ATS Society, due to which the 3 to 4 meters of the compound wall was damaged.

#WATCH | I was just 70 metres away from the building. The domilition was 100% succesful. It took 9-10 seconds for the entire building to demolish. There were 10 people in my team, 7 foreign experts and 20-25 people from Edifice Engineering: Chetan Dutta, Edifice Official pic.twitter.com/v4rLBSZzDQ

Putting an end to a nine-year-long battle, the Supertech Twin Towers located in Sector 93A of Noida was reduced to debris in less than 9 seconds on Sunday. After a dramatic explosion, the twin tower vanished as a huge cloud of smog spread over the entire area after the detonation. Over 3,700 kg of explosives were used to implode both towers by using the 'waterfall implosion' technique.

READ | In Pictures: Noida twin towers before and after massive 9-second demolition

The explosion has left an estimated 55,000 tonnes to 80,000 tonnes of debris which would take up to 3 months to be cleared.