Delhi weather forecast: Light rains and thunderstorms are likely to continue in the National Capital on October 4, a day after the city received heavy rainfall

The Indian Meteorological Department has predicted a generally cloudy sky with light rainfall in the National capital for Friday, October 4. It has also said the extended monsoon season of 2019 is very likely to continue for seven more days. In its weekly update, IMD forecast that withdrawal of southwest monsoon from west Rajasthan is likely to commence from around October 10. As per records, the most delayed withdrawal in the past years was in 1961 when withdrawal commenced on October 1. The normal date of withdrawal is September 1. 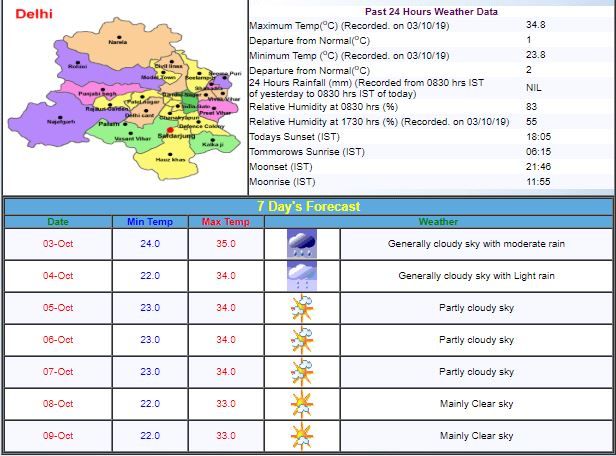 In Delhi, the minimum temperature predicted is 22 degree Celsius and the maximum 34 degrees. The Air Quality Index recorded on the morning of October 4 was at 192. Spells of moderate rain and thunderstorms are likely to continue in Delhi and places like Faridabad, Gurgaon, Mathura, Meerut, etc.

Heavy rainfall in Delhi on Thursday

On Thursday, heavy rains hit Delhi, resulting in operations at the city airport being suspended for nearly half an hour in the evening. The downpour also resulted in crawling traffic, with many on the road as Durga Puja festivities have begun. Operations remained suspended between 7:56 pm to 8:22 pm at Indira Gandhi International Airport due to heavy rains. The rain also brought down the temperature. The Regional Meteorological Centre of the IMD said there was a low-pressure area over Haryana that resulted in heavy rains over the National Capital Region.

Mahesh Palawat, Vice-President (Meteorology and Climate Change), said there was a cyclonic circulation over Punjab and Haryana. High humidity coupled with temperatures that have been rising since the last two days led to the formation of clouds, a normal phenomenon in pre-monsoon and post-monsoon time. According to the Meteorological Department, the maximum temperature recorded at 5.30 pm was 34.8 degrees Celsius, a notch above the normal, and the minimum was 23.8 degrees Celsius, two notches above the normal. Humidity levels oscillated between 83 and 55 per cent.