A picture of a woman cop from MP, who carried her one-and-a-half-year-old daughter in a baby carrier bag while doing her duty has gone viral on social media. 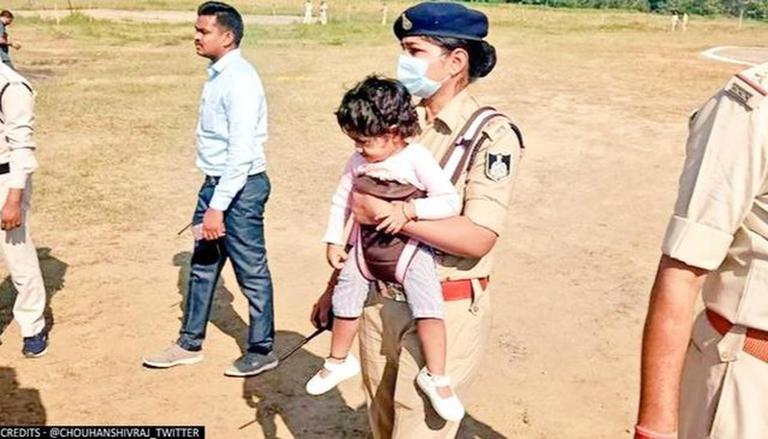 
A picture of a woman police officer from Madhya Pradesh, who carried her one-and-a-half-year-old daughter in a baby carrier bag while doing her duty at a helipad in the Alirajpur district has gone viral on social media. The woman cop has been identified as Monika Singh, who is posted as deputy superintendent of police (DSP) in MP's Dhar district, reported PTI. The image of the woman police officer was shared by Madhya Pradesh Chief Minister Shivraj Singh Chouhan on Twitter.

While sharing the two pictures, the Madhya Pradesh CM lauded the efforts of the woman cop. In the pictures shared on the microblogging site, one image shows the woman police officer performing her duty while holding her baby in a carrier backpack. In the second image posted on the microblogging site, MP CM Shivraj Singh Chouhan is seen placing his hand on the head of the little girl. While sharing the pictures, Shivraj Singh Chouhan in the caption written in Hindi said, "During my visit to Alirajpur, I saw that DSP Monika Singh was on duty carrying her one and a half-year-old daughter in a baby carrier bag. Her dedication towards her duty is commendable. Madhya Pradesh is proud of you. I wish her my best wishes and blessings to a little daughter." Take a look at the post:

While Speaking to PTI, DSP Monika Singh revealed that she is currently posted in Dhar, but she had to travel to Alirajpur, around 145 kilometres from Dhar for two days. When she was leaving for duty, her daughter woke up and insisted to come along. She added that she had to fulfil her responsibility as a mother and also perform her duty as a police officer, reported PTI. She was deployed at the helipad for the CM's chopper, who reached Alirajpur on Tuesday, October 20 for the two-day campaign for the Jobat Assembly seat.

"I had to fulfill the responsibility as a mother and also had to perform my duty (as a police officer) together," PTI quoted Monika Singh as saying.

The post of Shivraj Singh Chouhan has caught the attention of netizens. The post, since being shared, on Twitter, has garnered thousands of likes and scores of reactions. Social media users in the comments section praised the dedication of Monika Singh in performing her duty. One user commented, "We are proud of such officers displaying such duties. It can't be better than this." Another user commented, "Monika Ji you are the proud of us. Salute to you."

Monika ji you are the proud of us. Salute to you.

We are proud of such officers displaying such duties. It can't be better than this.

One woman's can do job and mother love together

Really she deserve your wishes....