The incident occurred at Terminal 2 of the Mumbai airport, which witnessed unprecedented weekend crowds, presumably owing to the festival season. 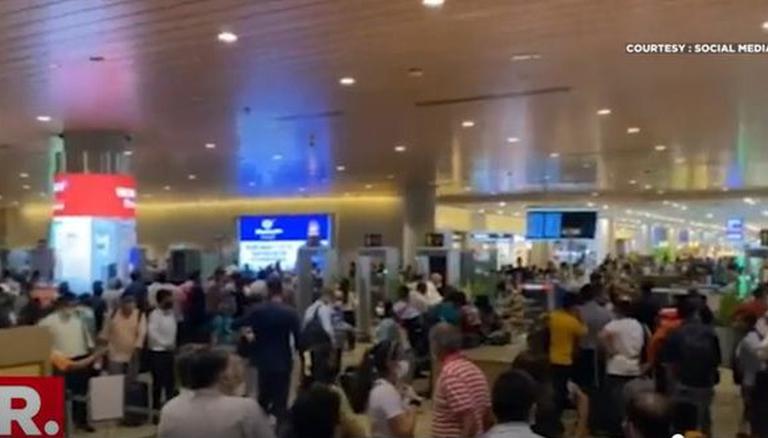 
Chaos broke out at Mumbai's Chhatrapati Shivaji Maharaj International Airport (CSMIA) on Friday morning after endless queues were witnessed at the security check-in, causing several passengers to miss their flights. The incident occurred at Terminal 2 of the CSMT airport, which saw unprecedented weekend crowds, presumably owing to the festival season. The queues began from outside the airport, all the way into the security check. According to passengers, it took them nearly half an hour to enter the airport and another one hour for security. Several passengers on social media shared videos and visuals of the horrid scenes. The images showed large crowds gathered in close proximity amid the prevailing COVID-19 pandemic and miles-long queues crawling slowly at the security check-in.

Several netizens also described their ordeal on social media. Some passengers compared the chaos at boarding to catching a Virar fast train, while others alleged that several people, including children, had been crushed as people went beserk trying to catch their flights. Some passengers also claimed that security systems were down in Mumbai airport this morning, owing to which the large crowds gathered.

Issuing a statement, the CSMIA spokesperson said, “With the onset of the festive season, there has been a surge in passenger traffic and a sudden spike witnessed at CSMIA this morning. Similar experiences have also been witnessed in other city airports of the country. Further owing to recent intelligence reports received by stakeholders and threat at another airport in the state, security measures have been further enhanced at CSMIA."

"The security and safety of our passengers are of utmost priority, and our endeavour is to continue to not compromise on these critical aspects. CSMIA airport has deployed additional staff for a quicker turnaround at all the security checkpoints for a smoother passenger experience. Additionally, CSMIA is following all the COVID protocols laid down by the Government to ensure a smoother transition."

The spokesperson added that keeping in mind the growing passenger traffic, CSMIA has planned to open Terminal 1 operations from October 20, 2021.

Complete chaos at Mumbai airport and the poor admin/officials have no idea how to control it. Proper mismanagement. @AdaniOnline @CSMIA_Official pic.twitter.com/dXElWci8pM

The Chhatrapati Shivaji Maharaj International Airport has announced the reopening of its domestic passenger terminal T1 from midnight of October 20. Airlines such as GoFirst, AirAsia India, Star Air and TruJet will resume all their domestic operations from Terminal 1 from October 20 at midnight, the private airport operator said in a release. The flights had been suspended in mid-April from T1 during the deadly second wave of the COVID-19 pandemic that hit the country. All airlines were forced to move operations to T2, which is largely used for international connectivity.