During the meeting, officials briefed PM Modi about the extensive consultations done with teachers and parents regarding the CBSE Class 12 Exams. 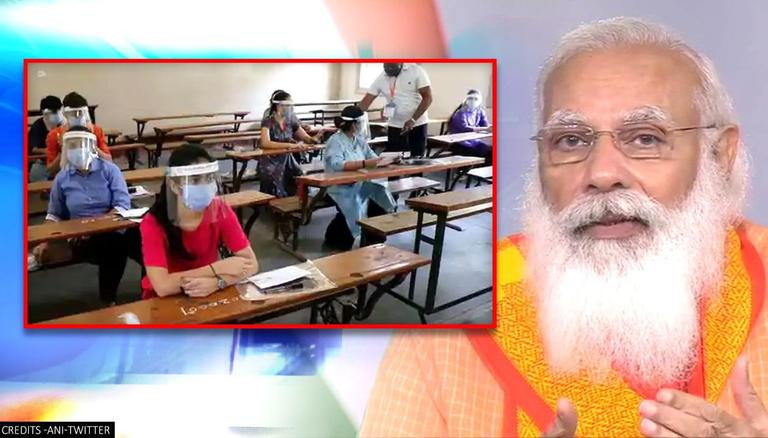 
Prime Minister Narendra Modi held a meeting with officials to deliberate over the future of the CBSE Class 12 Board Exams 2021 on Monday, sources reported. During the meeting, officials briefed PM Modi about the extensive consultations done with teachers and parents and the options that the government had when it came to conducting the CBSE Class 12 exams.

PM calls for meeting with states over CBSE Exams

As per sources, PM Modi directed a high-level meeting with all states and senior ministers of the Government of India to take into account wide-ranging suggestions and ideas. He has also said that that the government has to take a decision keeping in mind the present security of the children as well as their future prospects.

The final decision on the CBSE Exams will be based on the widest possible consultative process and will be the best possible option keeping in mind the current situation and future prospects, as per the government.

States give suggestions for CBSE Exams

In a meeting on Sunday, Union Education Minister Ramesh Pokhriyal ‘Nishank’ said that there is a broad consensus among states about conducting Class 12 board exams and an “informed, collaborative” decision will be taken by June 1.

This comes amidst some opposition by states like Maharashtra which have suggested opting for a “non-examination route” for Class 12 students while Delhi and Kerala which have proposed vaccinating all students before the exams. All states are expected to give their detailed suggestions by May 25.

Amid the second wave of the COVID-19 pandemic in India, there have been extensive deliberations over holding CBSE Exams for Class 12. As per the latest information on CBSE Class 12 exams, the Board has suggested slating the exams between July 15 and August 26 and the result for September. Two propositions have been placed by CBSE for the Board Exams--  conducting regular exams for 19 major subjects at notified centres or conducting shorter duration exams at respective schools where students are enrolled.

READ | CBSE to go ahead with Class 12 exams; Experts weigh in on Education Ministry's move
READ | CBSE Class 12 Board Exam 2021: Everything that happened in the key meeting today
First Published: 24th May, 2021 13:14 IST
SUBSCRIBE TO US