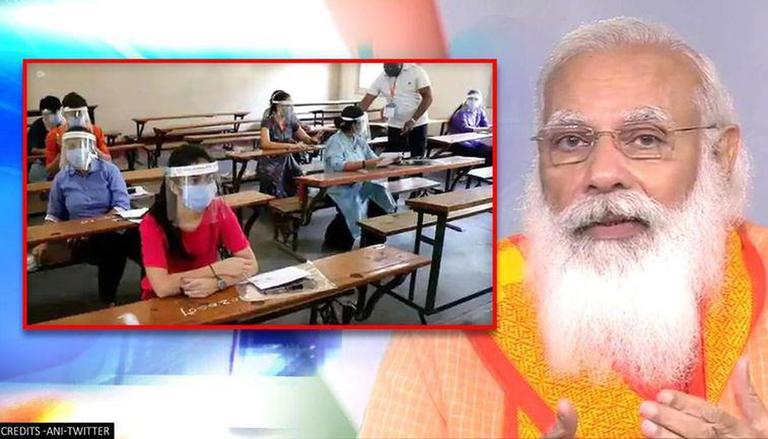 
With uncertainty looming over CBSE Class 12 Board Exams, PM Modi on Monday chaired a high-level meeting with officials to deliberate over the future of the critical board exams. The meeting was called by PM Modi after Union Education Minister Ramesh Pokhriyal 'Nishank' invited 'detailed suggestions' from States on the issue of conducting exams amid the COVID-19 pandemic. Now, Republic has accessed the inside track on the Prime Minister's meeting on the CBSE Class 12 Board Exams. PM Modi's meeting over the CBSE Class 12 Board exams has concluded and Republic has come to know that the Prime Minister was briefed over the options left for the government to organise the exams.

Notably, the key meeting on Sunday with CBSE officials, State Chief Ministers, and Education Ministers across the country over the resumption of CBSE class 12 board exams had remained inconclusive. On Sunday, Delhi Deputy Chief Minister Manish Sisodia (and also the Kerala government) urged the central government to vaccinate students and teachers in order to conduct the examination; however, others expressed concern about the safety of students when the second wave of COVID-19 is still wreaking havoc in India.

In the now-concluded meeting on the CBSE Class 12 Board Exams, PM Modi was briefed about the extensive consultations done with teachers and parents by the Ministers and officials. During the high-level meeting, PM Modi said that the government has to make a decision taking in mind the present safety and security of the children as well as their future prospects. Prime Minister Modi also directed the officials present to hold another high-level meeting with all states and senior ministers of the Government of India to take into account their suggestions, ideas, and also from the states. Therefore, the final decision will be based on the widest possible consultative process and will be the best possible option keeping in mind the current COVID situation and future prospects.

States give suggestions for CBSE Class 12 Board Exams

In the meeting on Sunday, Union Education Minister Ramesh Pokhriyal ‘Nishank’ said that there is a broad consensus among states about conducting CBSE Class 12 board exams and an “informed, collaborative” decision will be taken by June 1. This comes amidst some opposition by states like Maharashtra which have suggested opting for a 'non-examination route' for Class 12 students while Delhi and Kerala have proposed vaccinating all students before the exams. All states are expected to give their detailed suggestions by May 25.

READ | CBSE to go ahead with Class 12 exams; Experts weigh in on Education Ministry's move

Reduce the number of subjects for Class 12 Board Exams: Educationalist

Talking to Republic TV, Pervin Malhotra, Director, Career Guidance India, on Sunday stated that board exams of India should be low-staked as various universities hold their own exams to select students including Delhi and other universities. Pervin also outlined that if the government decides to hold Class 12 board exams then they should reduce the number of subjects.

READ | CBSE Class 12 Board Exam 2021: Everything that happened in the key meeting today

"Traditionally, Class 12 board exam results have been a very significant arsenal in the entire admission and career scenario but over the years one has seen its importance dwindle. Even the NEP 2020 said that board exams are needed to be low-staked meaning admission to higher education and professional courses are not going to be solely pegged on marks that you got in CBSE or state boards. But if you must have CBSE class 12 board exams, if people are comfortable, then reduce the number of subjects; for e.g. if you are going to Engineering all you need is Physics, Chemistry, and Maths. No need to test English or Physical Education," said Pervin Malhotra, Director, Career Guidance India.