Delhi Pradesh Mahila Congress (DPMC), under the leadership of DPMC President Sharmistha Mukherjee, to hold protests outside the BJP office in Delhi on Monday

Delhi Pradesh Mahila Congress (DPMC), under the leadership of DPMC President Sharmistha Mukherjee, would hold protests outside the BJP office in Delhi on Monday. The protests are in relation to the remarks made by the Chief Minister of Haryana, Manohar Lal Khattar, against the Indian National Congress (INC) interim President Sonia Gandhi. The women are set to march from Delhi Pradesh Congress Committee (DPCC) office to the Delhi BJP office and will burn effigies of the Haryana CM outside the BJP’s office.

'I take offence to the disgraceful remarks'

All India Mahila Congress President Sushmita Dev in a press release stated, "I strongly and unequivocally condemn Haryana Chief Minister's Manohar Lal Khattar's against Congress President Smt. Sonia Gandhi ji... We in the Congress are committed to upholding the dignity in public life but as a woman, I take offence to the disgraceful remarks made and demand an unconditional apology."

The press release in its entirety 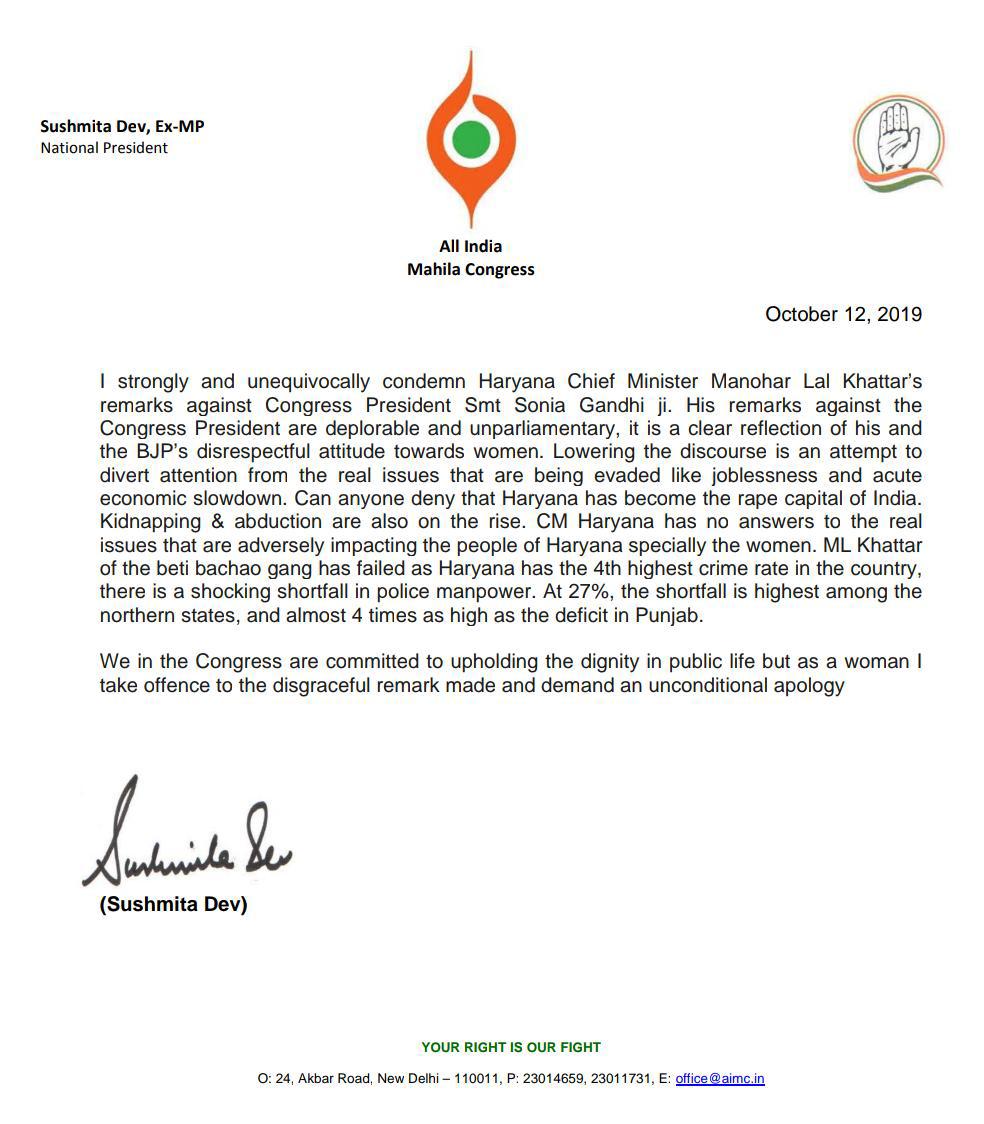 Addressing an election rally, Chief Minister Manohar Lal Khattar recalled, "After losing the Lok Sabha elections, Rahul Gandhi resigned as the Congress President and started saying that the party should get new president from outside Gandhi family." CM Lal added, "We thought this was good, to move away from nepotism (parivarvad)... But they spent three months moving around the country in search of a new party president. After three months who became the president? Sonia Gandhi. Khoda Pahar Nikli Chuiya... This is their condition," added Khattar.

READ | Siddaramaiah Thanks Sonia Gandhi For Appointing Him LoP In Karnataka

The INC via its official Twitter handle has condemned the remarks made by the Haryana CM; the message roughly translates to: "The comment made by the BJP's Chief Minister is not only cheap and objectionable, but it also shows the anti-women character of the BJP. We condemn Chief Minister ML Khattar's remark and demand an immediate apology from him," the Congress tweeted in Hindi.