LIVE: BJP-Opposition Face-off As Votes Are Counted For Bypolls To 4 Lok Sabha And 10 Assembly Constituencies As Well As Rajarajeshwari Nagar In Karnataka. All Updates Here

Counting of votes for by-elections to four Lok Sabha seats and 10 assembly seats, as well for the deferred election to Karnataka's Rajarajeshwari Nagar assembly constituency, will be held on Thursday with a lot at stake.

Update at 13:37: BJP wins Tharali assembly bypoll in Uttarakhand by just over 1800 votes 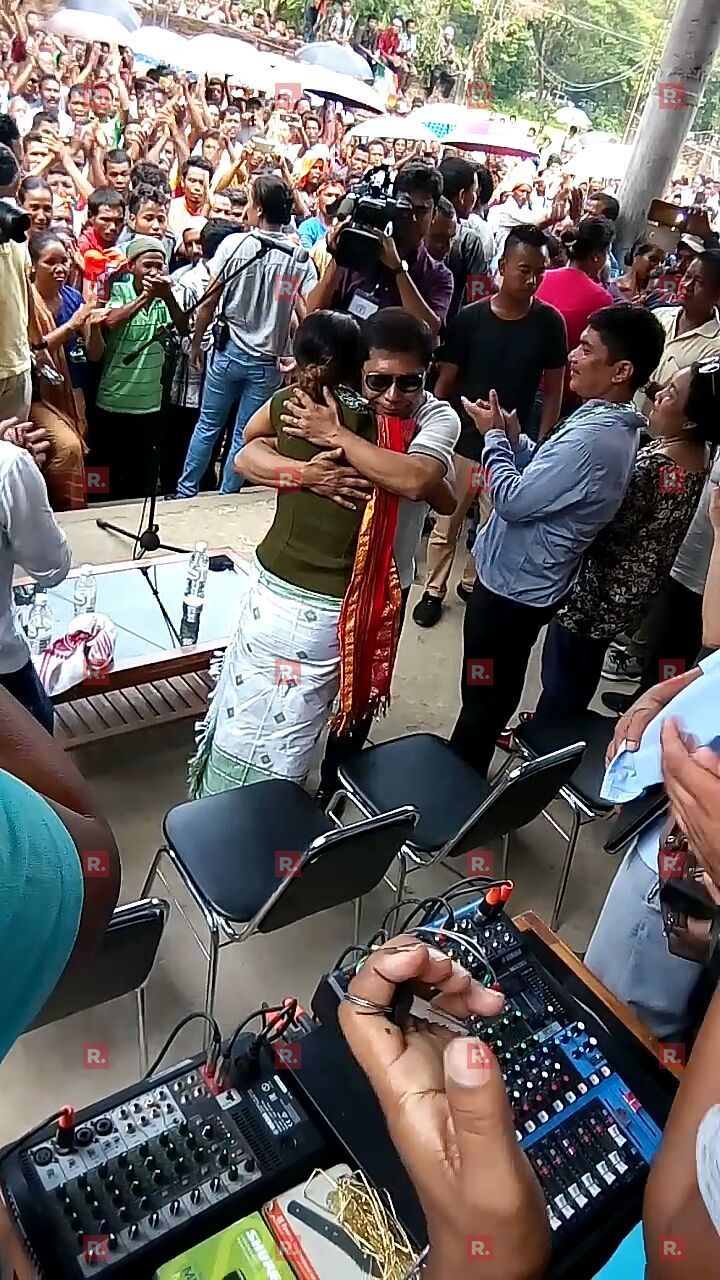 Update at 13:20: It think it's become clear that the Modi wave is over, says Punjab CM Captain Amarinder Singh

"I thank the voters for our victory in Jokihat. It is their win. This is a win for 'Laluwaad'. BJP & Nitish are nowhere close to understanding Lalu Yadav"

"Those who spread swords and violence have lost. Those who do politics of love have won"

Update at 12:16 pm: BJP leading by 815 votes in Uttarakhand's Tharali constituency after 10 rounds of counting

Update at 12:05 pm: Meghalaya CM Conrad Sangma speaks to Republic TV after Congress emerges single-largest party in the state and states its intention to form a government. He said:

"Out of 60, we have 38 members who are supporting our coalition. So I don't think we have anything to worry about"

Update at 11:56 am: Congress leading by 1092 am in Tharali assembly constituency of Uttarakhand after 9 rounds of counting

Update at 11:54 am: Samajwadi Party leading by 10208 votes over BJP after Round 20 in the Noorpur, U.P, assembly constituency

Update at 11:43 am: After Congress wins Assembly bypoll in Meghalaya's Ampati, thereby emerging as the biggest party in the state, Mukul Sangma says,

"We will explore a way to form the Congress-led government in Meghalaya. I credit the victory to the electorate and people of Meghalaya"

Update at 11:41 am: BJP's Palghar Lok Sabha bypoll candidate Rajendra Gavit, who is leading by 19742 votes, speaks exclusively to Republic TV and says: "We worked hard. All credit goes to CM Fadnavis."

On Shiv Sena's EVM allegations, he said - "Why didn't they raise EVM issue when they won the BMC election?"

Update at 11:17 am: RJD leading by 16299 votes in Bihar's Jokihat assembly bypoll after 14 rounds of counting

"We have sought time from the Election Commission. Can they justify the EVM malfunctioning? People will lost faith in EC"

Update at 11:12 am: At end of 10th round of counting, Congress' Munirathna Naidu leads in Karnataka's RR Nagar by over 45000 votes

Update at 11:09 am: BJP leading by 17414 votes in Palghar Lok Sabha seat after seven rounds

Update at 10:34 am: BJP leading from Gomia assembly seat in Jharkhand by 7174 votes

Update at 10:33 am: In Karnataka's RR Nagar, Congress' Munirathna Naidu now leads by over 40000 votes

Update at 10:25 am: Shiv Sena chief Uddhav Thackeray calls for urgent meeting at his Matoshree residence

Update at 10:17 am: RJD's candidate takes lead in Bihar's Jokihat

Update at 10:15 am: RLD and opposition now leading by over 10,000 votes in UP's Kairana Lok Sabha bypoll

Update at 10:02 am: Congress candidate leading in Ampati, Meghalaya

Update at 10:01 am: BJP leads Shiv Sena by over 10,000 votes in Palghar, Maharashtra Lok Sabha bypoll

Update at 10:00 am: BJP leading in Tharali, Uttarakhand, by 1200 votes versus Congress

Update at 9:53 am: Congress leading by almost 8500 votes versus Akali Dal in Punjab's Shahkot assembly seat

Update at 9:52 am: TMC leading by over 20000 votes from Maheshtala, West Bengal after second round. CPI(M) is second, BJP is third.

Update at 9:47 am: BJP candidate leads by over 6000 votes in Palghar, Maharashtra, Lok Sabha bypoll

Update at 9:41 am: LDF candidate leading by 4638 votes in Chengannur (Kerala)

Update at 9:40 am: Congress candidate Laddi Sherowalia leading by around 8500 votes in fourth round in Shahkot, Punjab

Update at 9:35 am: After 4th round, Congress' Munirathna leading by 18000 votes in Karnataka's RR Nagar

Update at 9:20 am: BJP candidate leading in Tharali (Uttarakhand). Munirathna leads by over 13,000 votes with tally of 25219 in RR Nagar, Karnataka, at end of third round

Update at 9:19 am: Congress candidate leading in Shahkot, Punjab, by almost 5800 votes after round 3.

Update at 9:16 am: BJP leads in Palghar, Maharashtra (LS)

Update at 9:13 am: JMM leading in Gomia, Jharkhand

Update at 9:08 am: 4th round completed in Maheshtala, WB. TMC in the lead

Update at 9:00 am: BJP's candidate now leading in Jharkhand's Gomia. Congress candidate leading by around 3350 votes in second round in Punjab's Shahkot

Bihar: Visuals from a counting centre in Jokihat, where counting has begun for assembly by-poll. pic.twitter.com/RaFvpYK1zW

Update at 8:52 am: TMC leading after first round of counting in West Bengal's Maheshtala assembly bypoll

Update at 8:47 am: BJP leading in postal ballot in Lok Sabha bypoll in Palghar

Update at 8:44 am: Congress candidate leading in Punjab's Shahkot with over 1000 votes after round 1

Update at 8:38 am: First round of counting completed in Maheshtala bypoll (West Bengal)

Maharashtra: Visuals from a counting centre in Bhandara–Gondia Lok Sabha constituency, where counting of votes for the Lok Sabha by-poll has begun. pic.twitter.com/3bjnPXbCeA

#Maharashtra: Visuals from a counting centre in Palghar, counting of votes for the Lok Sabha by-poll has begun. pic.twitter.com/4swJkmlaCj

Update at 8:21 am: Counting begins in Shahkot bypoll in Punjab

#Punjab: Visuals from a counting centre in Shahkot, counting of votes for the Assembly by-poll has begun. pic.twitter.com/gsw3i8Ds8O

Update at 8:07 am: Counting begins in Tharali (Uttarakhand) assembly bypoll

Update at 8:06 am: Counting of votes begins in Jokihat (Bihar) and Gomia (Jharkhand)

Update at 8:01 am: Counting of votes begins in Kairana and Noorpur in Uttar Pradesh

Counting of votes for by-elections to four Lok Sabha seats and 10 assembly seats, as well for the deferred election to Karnataka's Rajarajeshwari Nagar assembly constituency, will be held on Thursday with a lot at stake.

The Palghar and Bhandara-Gondia seats in Maharashtra, the Kairana seat in Uttar Pradesh and the lone parliamentary constituency in Nagaland went to polls on Monday. It will be a litmus test for the BJP as a positive outcome is necessary for the saffron party to maintain its majority in the Lok Sabha.

The results, particularly in Kairana, will test the mettle of a united opposition versus that of Prime Minister Narendra Modi. After losing high-profile bypolls from Gorakhpur and Phulpur, the BJP campaigned hard to win the Kairana seat, though it is up against the combined might of the Congress, SP and BSP who have all thrown their weight behind the RLD candidate. Elections were necessitated in Kairana after the seat fell vacant in February following the death of BJP leader Hukum Singh. The BJP has fielded Mriganka Singh, daughter of Singh, from this seat.

Similarly, in Maharashtra's Palghar and Bhandara-Gondiya, all four major parties -- the BJP, Shiv Sena, NCP, and Congress left no stone unturned to woo the electorates in their favour.

Palghar is a reserved seat, which was previously held by the BJP. The seat fell vacant after sitting BJP MP Chintaman Wanga died in January. Wanga had thrice won the constituency as a BJP member, though after his death, his family has joined hands with the Shiv Sena.

In Bhandara-Gondia, the bye-election was necessitated when BJP's sitting MP Nana Patole quit the party to join the Congress in December last year.

Meanwhile, in Nagaland, Neiphiu Rio of the Nationalist Democratic Progressive Party was the representative of the lone Lok Sabha constituency in Nagaland. Rio, who represented this constituency, quit in February to contest in the assembly election and is now the Chief Minister of Nagaland.

The by-poll in Gomia Assembly was necessitated after the sitting MLA Yogendra Prasad Mahto of the Jharkhand Mukti Morcha (JMM) was expelled from the assembly after he was convicted in a coal theft case. In Jharkhand's Silli the sitting MLA, Amit Mahto, of the JMM was convicted in a criminal assault case in March following which the seat fell vacant. The seat of Noorpur in Uttar Pradesh fell vacant after the death of sitting BJP MLA Lokendra Singh Chouhan. Chouhan was a two-time MLA from here.
The Maheshtala seat was held by Trinamool Congress (TMC) MLA Kasturi Das until his death in February. He too had represented this constituency twice.
Former Meghalaya Chief Minister and Congress MLA Mukul Sangma resigned from Ampati seat in March, as he had also won from Songsak. Sangma was the MLA from this seat since 1993. The Tharali seat in Uttarakhand is reserved for the member of scheduled castes. The by-poll was necessitated after the death of the BJP MLA Magan Lal Shah in February. The Chengannur seat fell vacant after the death of Communist Party of India (Marxist) sitting MLA K.K. Ramachandran Nair in January.

In Bihar, Sarfaraz Alam had won the Jokihat assembly seat on Janata Dal (United) (JD-U) ticket. He later contested from RJD ticket and resigned in April from the post of MLA after his victory in the Araria Lok Sabha by-poll.

The Shiromani Akali Dal representative of the Shahkot seat, Ajit Singh Kohar the sitting MLA, died in February, which necessitated by-poll in the assembly. Kohar had won from the constituency in 2012 and 2017. Finally, the by-poll in Palus-Kadegaon Assembly constituency was necessitated due to the death of Congress's Patangrao Kadam, who had won the constituency twice. The EC has declared Kadam's son elected unopposed as the BJP had withdrawn its candidate.

The bye-elections were also marred by complaints of EVM malfunctioning in view of which the election commission had to replace the faulty machines at certain places after which repolling was held on several booths on Wednesday.

In Karnataka's Rajarajeshwari Nagar constituency, the election had been deferred as the sitting Congress MLA, Munirathna Naidu, who was to also contest this time around, was named in two FIRs, allegedly for attempting to bribe voters. With the JD(S)-Congress coming up trumps after the Karnataka elections despite the BJP emerging the single largest party, as well as the subsequent show of strength by the opposition, there are sure to be fireworks depending on who wins.