With the conclusion of Maharashtra assembly polling, the predictions of exit polls project how the NDA is likely to form its govt while MNS, and AIMIM to fall.

With the conclusion of Maharashtra assembly polling on Monday, the predictions of Pradeep Bhandari's Jan Ki Baat project how the NDA is likely to form its government, with the BJP likely to fall short of the halfway mark. NDA is projected to secure seats in the range of 216 to 230 seats with incumbent BJP laying hold of a significant majority with 135 to 142 seats--projecting a definitive upswing from its 2014 tally of 122 seats. BJP's saffron ally, Shiv Sena is also set to better its 2014 seat share, which was 68 will secure 81 to 88 seats, as per the projections.

Meanwhile, Asaduddin Owaisi's AIMIM which made its maiden entry into Maharashtra assembly polls by winning 2 seats in 2014, in 2019 is predicted to go down to 0 to 1 seat. AIMIM's Byculla candidate, Waris Pathan is projected to retain the single seat. In 2014, AIMIM won Aurangabad Central and Byculla seats in Mumbai. AIMIM announced on September 6 that the party officially broke its alliance with Prakash Ambedkar's Vanchit Bahujan Aghadi, as the parties could not reach a "comfortable figure" of seat distribution.

Raj Thackeray's MNS is predicted to be wiped out of the Maharashtra assembly polls with zero seats. The Maharashtra-based party secured only a single seat in 2014, after fielding 219 candidates. The graph for MNS has stooped significantly low in 2019 from 12 seats in 2009 Assembly elections. Sharad Pawar's NCP is predicted to grab 30 to 35 seats. Meanwhile, Congress is estimated to contribute 20 to 24 seats to the UPA alliance. 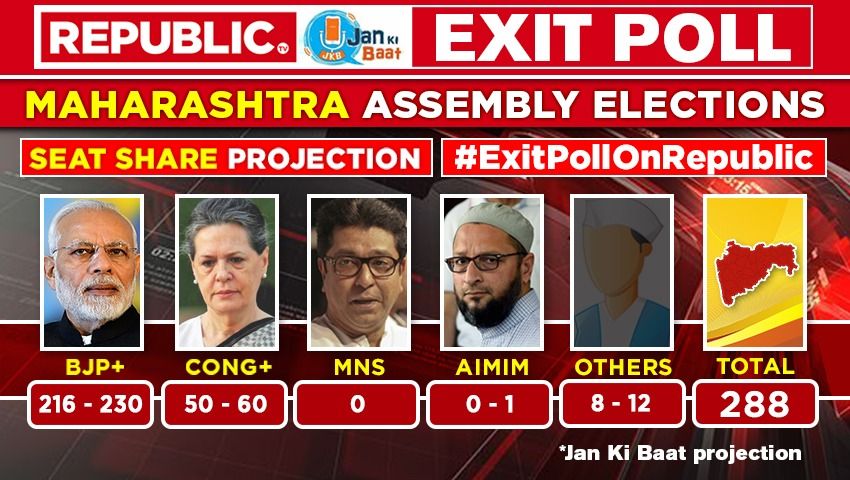 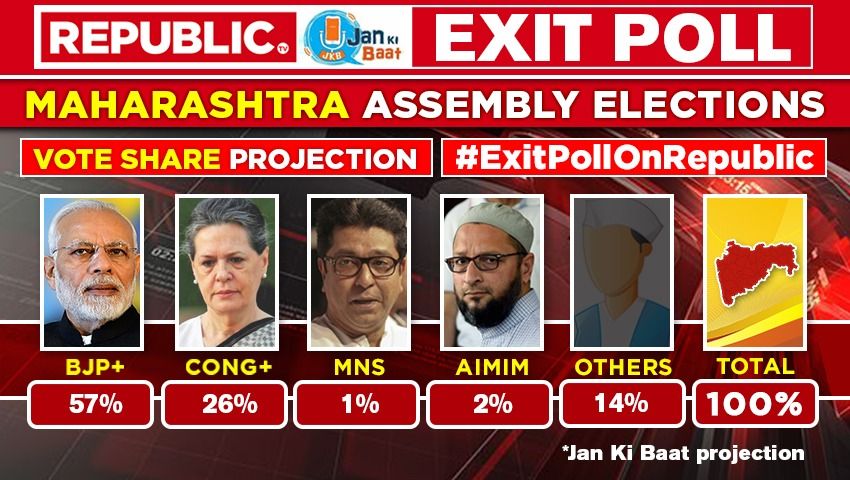 In Maharashtra, where the 'Mahayuti' alliance of BJP, Shiv Sena and smaller parties is against the 'Maha-agadhi' led by the Congress and the NCP. In the saffron alliance, BJP will be contesting on 150 seats, and Shiv Sena will fight on 124 seats in Maharashtra. Alliance partners of BJP have fielded 14 candidates on the party's lotus symbol. Meanwhile, the Congress is contesting the polls in alliance with the NCP. Both parties are contesting on 125 seats each in the 288-member Assembly and its allies on the remaining 38 seats.