In the state, the electoral battle between the two alliances--Mahayuti of the BJP and Shiv Sena will tussle with the Maha-agadhi of NCP and the Congress party.

In the state, the electoral battle between the two alliances--Mahayuti of the BJP and Shiv Sena will tussle with the Maha-agadhi of NCP and the Congress party.
Update at 8:59 PM
2 months ago | October 24, 2019 20:59

As per official Election Commission trends:

Making his political debut, Shiv Sena's Aaditya Thackeray won from Mumbai's Worli constituency. Yuva Sena chief, the first from the Thackeray family to contest elections, won by a margin of over 70,000 votes defeating his rival from the NCP.

#Oct24WithArnab | Who will be the CM? That is an important question. We have decided a 50-50 formula, we will sit together and discuss that: Shiv Sena Chief Uddhav Thackerayhttps://t.co/jghcajZuXf pic.twitter.com/qaNJTWRNlL

"It is historic that a government and a chief minister has come to power again."

#Oct24WithArnab | Strike rate has improved, it is at 70% now. People have given a decisive mandate: Maharashtra CM Devendra Fadnavis

Amid the vote counts in Maharashtra, NCP patron Sharad Pawar stated that people 'rejected the arrogance' of BJP. Moreover, he took a jibe at Satara's sitting MP Udayanraje Bhosale who jumped the boat to BJP, just weeks ahead of the elections.

Pawar said, "People have rejected the arrogance of the people in power. I want to thank all the allies for their support. The Opposition has worked hard and all members of Congress-NCP and allies have delivered and given their best. I thank them all. Power comes, power goes but it is important to remain committed to a cause and we thank people for the love they showed."

LIVE on #Oct24WithArnab | We accept the mandate given to us by the people: NCP leader Sharad Pawarhttps://t.co/jghcajZuXf pic.twitter.com/rgE74iRWXo

When questioned if NCP will form a government with BJP's ally Shiv Sena, Pawar responded saying, "No decision taken yet. We will decide sitting along with other parties on Shiv Sena. We cannot take the decision alone We want to show people a new leadership and a new country."

"I thank Prime Minister, Home Minister and other Chief Ministers as they visited the state at least for elections. Flood-affected people have been the worst hit. I hope they release help for the people," Pawar added.

BJP's Parli candidate Pankaja Munde loses the constituency. She had defeated her cousin Dhananjay Munde in the 2014 assembly polls. Pankaja was seeking a third term from the Parli, a constituency that was previously held by her late father and Union Minister Gopinath Munde.

NCP patron Sharad Pawar's nephew Ajit Pawar wins Maharashtra's Baramati constituency by a margin of over 1 lakh votes. He was re-elected for the seventh term from the seat. Ajit Pawar has previously served as the Deputy chief minister of the State and Minister of State.

Ramdas Athawale Republican Party of India said, "We have full faith that we will reach 200, there is still time."

When questioned if the NDA alliance got a sudden jerk with the ongoing counting, Athawale, in a poetic response said, "Hume zaroor laga hai hai thoda zhakta, hum aage denge virodhi ko fatka." (We have got a little shock, but we will retaliate befittingly to our opposition later.) 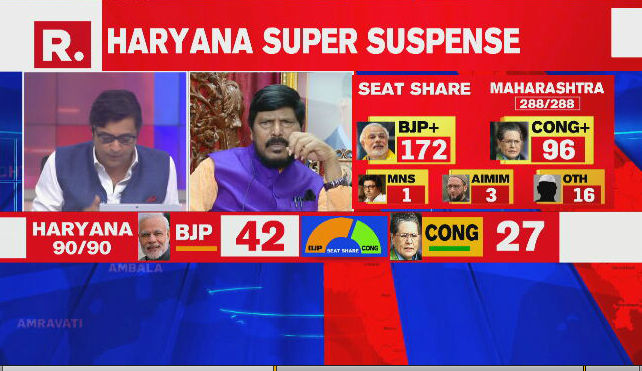 Shiv Sena wants a 50-50 government in Maharashtra as trends continue to favour NDA in the state. Shiv Sena leads in 61 seats, BJP leads in 102 seats.

Maharashtra BJP chief Chandrakant Patil will come to Mumbai by Thursday afternoon, he is currently in Kolhapur. The BJP state chief is currently leading in Pune's Kothrud constituency.

Sanjay Raut said, "I am going to meet Uddhav Ji. The numbers are not as bad, and this happens sometimes. Yes, we will definitely continue with the alliance. We have agreed upon a 50-50 formula." 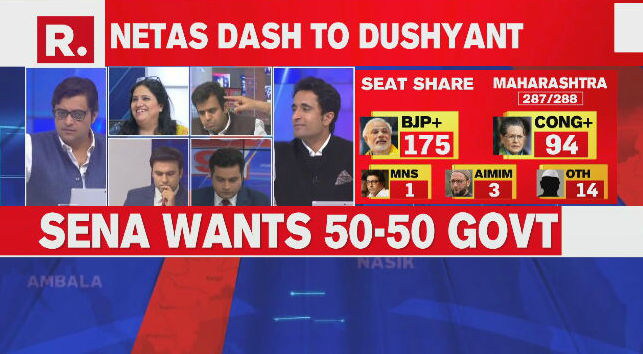 Chief Minister Devendra Fadnavis, seeking to retain his position, is leading, after the second round of counting from Nagpur South-West constituency.

AIMIM leader Abdul Gaffar takes the lead in Aurangabad East constituency in Maharashtra. He is pitted against incumbent BJP MLA Atul Save.

Maharashtra Election Result: BJP+ leading over Congress+ in the state as per official trends.

#LIVE on #Oct24WithArnab | BJP + leading over Cong + in Maharashtra as per trends. Tune in to watch the latest numbers coming in here - https://t.co/RZHKU3wOei pic.twitter.com/ydIO6poPW8 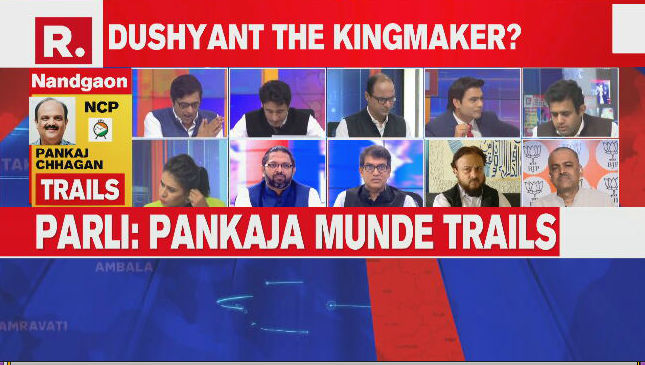 #LIVE on #Oct24WithArnab | Trends are in for almost all of Maharashtra's seats, with the BJP-Shiv Sena alliance holding a big lead over Congress-NCP. Tune in to watch here - https://t.co/RZHKU3wOei pic.twitter.com/1ZBVaZPKWd

Trends are in for almost all of Maharashtra's seats, with the BJP-Shiv Sena coalition holding a big lead over Congress-NCP.

#LIVE on #Oct24WithArnab | Trends are in for almost all of Maharashtra's seats, with the BJP-Shiv Sena alliance holding a big lead over Congress-NCP. Tune in to watch here - https://t.co/RZHKU3wOei pic.twitter.com/1ZBVaZPKWd

Maharashtra Election Result 2019: Shiv Sena's Aaditya Thackeray contesting from Mumbai's Worli constituency leading with 7020 votes after the first round of counting, as per ANI.

As per ANI reports, BJP's Vikhe Patil Radhakrishna EknathRao leading with 6313 votes from Shirdi assembly constituency, after the first round of counting.

Former BJP MLA Anil Gote, the Independent candidate from Maharashtra's Dhule Assembly seat, spent the night outside the EVM strong room in his segment, claiming he was guarding the facility to avoid any misuse of the voting machines ahead of counting on Thursday.

#Oct24WithArnab | BJP + crosses the halfway mark in Maharashtra as per the trends coming in. Tune in for the fastest numbers coming in - https://t.co/rGQJsiKgt2 pic.twitter.com/hXBG8yZ84i

As per official trends, BJP crosses the halfway mark in Maharashtra.

#Oct24WithArnab | BJP crosses the halfway mark in Maharashtra as per the trends coming in. Tune in for the fastest numbers coming in - https://t.co/RZHKU3wOei pic.twitter.com/ka84qrYofG

#Oct24WithArnab | BJP leads in Faridabad, NCP leads in Islampur as per initial trends. Tune in for the fastest trends here - https://t.co/RZHKU3wOei pic.twitter.com/gOqOMG8Yz9

Maharashtra Election Result 2019: As per official trends from Election Commission, Congress leading on 1 seat and NCP leading on 2 seats in Maharashtra.

#MaharashtraAssemblyPolls: Counting of votes is underway at Colaba counting centre in Mumbai; As per official trends from Election Commission, Congress leading on 1 seat and NCP leading on 2 seats in the state pic.twitter.com/Q1FswXZOCW 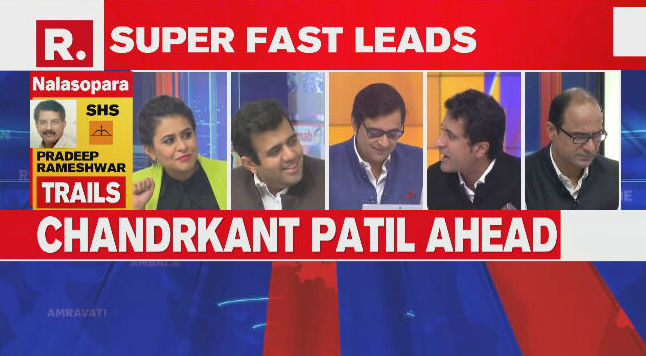 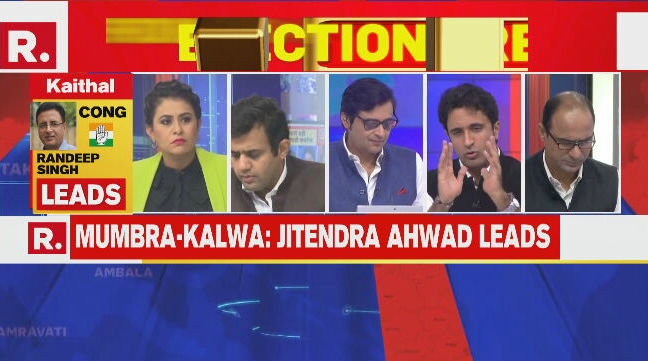 #Oct24WithArnab | Ajit Pawar leads from Baramati as per initial trends. Tune in for the fastest numbers coming in here - https://t.co/rGQJsiKgt2 pic.twitter.com/7wzPfHoRMS

As per initial trends, BJP-Shiv Sena with a lead over NCP-Congress in Maharashtra.

#LIVE on #Oct24WithArnab | BJP-Shiv Sena with a lead over Congress-NCP in early trends in Maharashtra; Tune in to watch the results unfold with Arnab here - https://t.co/rGQJsiKgt2 pic.twitter.com/xmfd4YseJM

In Mumbai's Worli, Aaditya Thackeray, the first from the family to run for elections is leading. 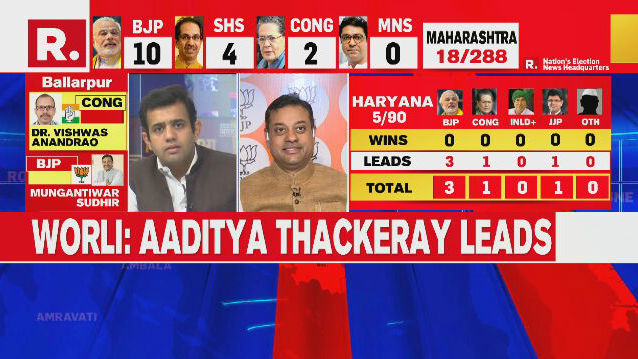 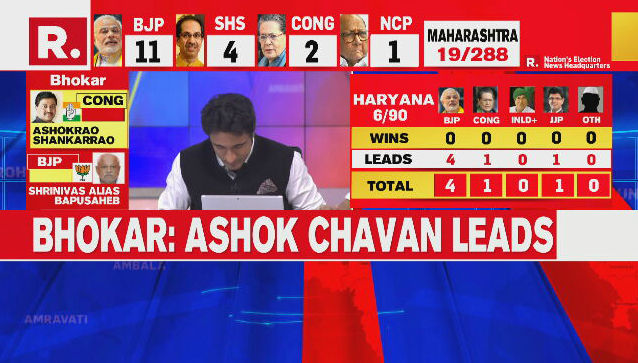 As per initial leads, BJP-led NDA leads in Maharashtra.

#Oct24WithArnab | As per initial trends coming in, NDA leads in Maharashtra. Watch the numbers coming in here - https://t.co/rGQJsiKgt2 pic.twitter.com/S1Q2UkSGld

#Oct24WithArnab | Tune in for the fastest breaking updates and updates with Arnab and team on Republic Media Network here - https://t.co/rGQJsiKgt2 pic.twitter.com/RbtNHhq4DW

Posters congratulating BJP’s Kothrud candidate Chandrakant Patil and state president on his victory have already been put up in Pune, prior to the electoral verdict. Similarly, posters have been put up for Rohit Pawar, the NCP candidate from the Karjat Jamkhed constituency in Karjat. 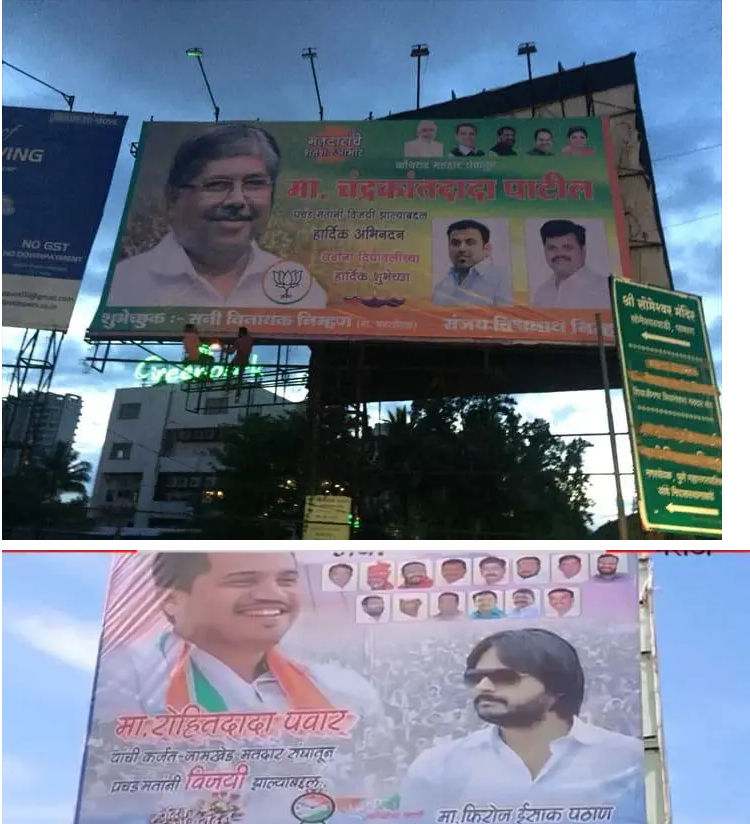 Minutes away from the counting of votes for the Maharashtra Assembly elections, the BJP state office in Mumbai prepares ladoos.

Life-size cutouts of PM Modi and senior BJP leaders come up at the party's Mumbai office ahead of the counting of votes.

#Oct24WithArnab | Cutouts of senior party leaders and decorations at BJP's party office in Mumbai ahead of the counting of votes. Tune in to watch #LIVE here - https://t.co/RZHKU3wOei pic.twitter.com/KgGKVdnX47

The result of the Maharashtra assembly elections will be out on October 24, after the voting process concluded on October 21. In the state, the electoral battle between the two alliances--Mahayuti of the BJP, Shiv Sena and Republic Party of India will tussle with the Maha-agadhi led by NCP and the Congress party.

In the saffron alliance, BJP contested on 150 seats, and Shiv Sena fought on 124 seats in Maharashtra. Alliance partners of BJP fielded 14 candidates on the party's lotus symbol. Meanwhile, the Congress contested the polls in alliance with the NCP. Both parties contested on 125 seats each in the 288-member Assembly and its allies on the remaining 38 seats.

The opposition tried to corner the BJP government on the handling of the economy with Congress leader Rahul Gandhi blaming the ruling party for the economic slowdown, unemployment, highlighting issues like "failure" of demonetisation and GST rollout. The BJP, on the other hand, is seeking a second straight term under Chief Minister Devendra Fadnavis in Maharashtra.

Among other parties, Raj Thackeray's MNS fielded 101 candidates, the CPI 16, the CPM 8. The BSP fielded candidates in 262 constituencies. A total of 1400 Independents are also in the poll arena. The opposition campaign was, however, lackluster as both the Congress and the NCP were plagued by infighting and desertions in the run-up to the polls.

The campaign in Maharashtra was marked by sharp exchange of barbs between the chief minister of Maharashtra and NCP chief Sharad Pawar, who hit the hustings at the age of 79 and addressed a number of rallies. While allies NCP and Congress failed to hold any joint rallies, PM Modi addressed nine rallies across the state, Rahul Gandhi spoke at six public meetings. The campaign also saw an undertone of jostling for supremacy between the BJP and the Shiv Sena, which had fought the last assembly elections separately, winning 122 and 63 seats respectively. The Congress had bagged 42 and the NCP 41 seats.

Prominent candidates in the fray are Chief Minister Fadnavis and his predecessors from Congress, Ashok Chavan, who is in fray from Bhokar in Nanded district, and Prithviraj Chavan seeking re-election from Karad South in Satara district. Yuva Sena chief Aaditya, the first from the Thackeray family, contested from Mumbai's Worli constituency. NCP's Satara strongman, Shivaji Maharaj's descendent Udayanraje Bhosale jumped the ship to BJP weeks before the elections.