The Puducherry exit polls have predicted a clear win for the National Democractic Alliance (NDA) allies in the Union Territory.


The exit poll results for the Puducherry assembly elections have been announced on Thursday. The elections for the 30-seat assembly were held on April 6 in a single phase. The exit polls have predicted a clear edge for the National Democratic Alliance (NDA) and allies in the Union Territory, with the Republic-CNX exit poll projecting that the BJP-NR Congress axis will form the next government in Puducherry. Other exit polls have similarly predicted that the NDA will emerge victorious.

The Republic-CNX exit poll has predicted that the BJP and All India N.R. Congress (AINRC) NDA coalition will win 16 to 20 seats. The Secular Democratic Alliance (SDA) of the Congress and allies, however, is trailing behind.

Meanwhile, the party-wise seat projection indicates that the AINRC, which is part of the NDA in Puducherry is set to emerge as the single largest party followed by the Congress and DMK. 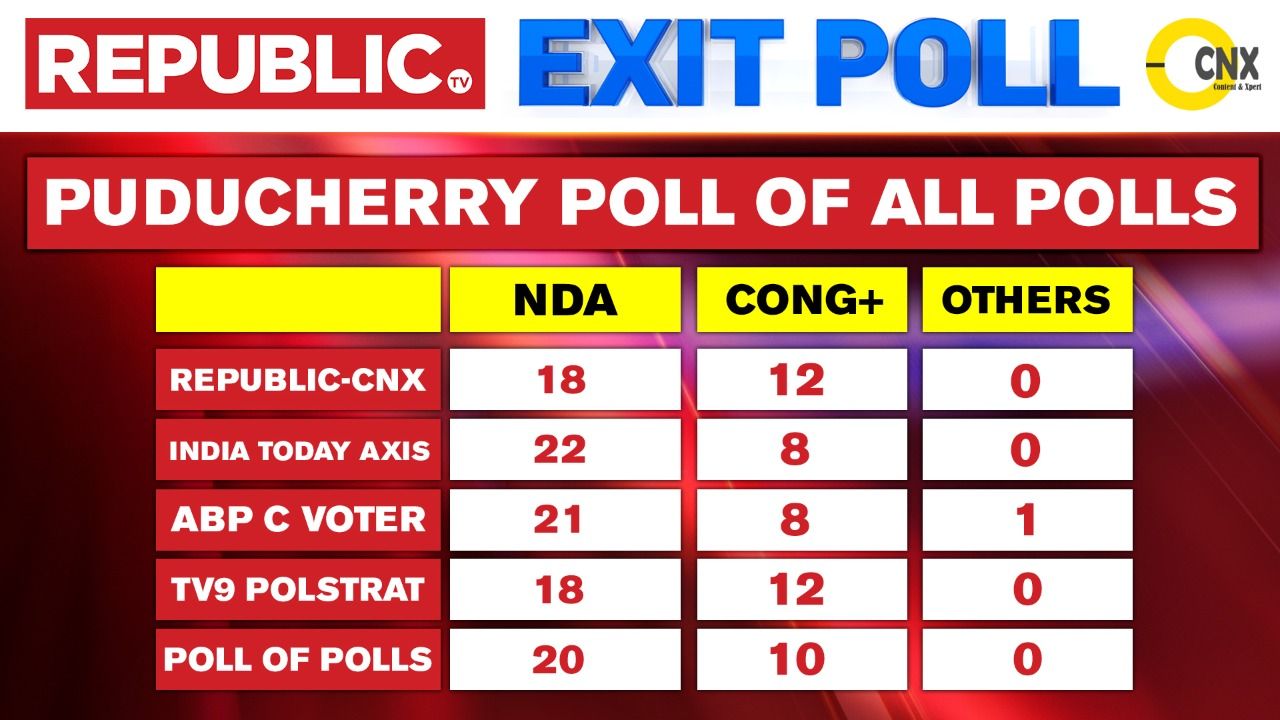 The India Today-Axis poll has also projected a victory for the NDA coalition in Puducherry. As per the Axis poll, the NDA will win 20 to 24 seats while the rival SDA alliance will trail on 6 to 10 seats.

The ABP-CVoter exit poll has projected a similar outcome, with NDA winning. As per CVoter, the AINRC-BJP coalition will win 19 to 23 seats as compared to SDA's projection of winning in 6 to 10 seats. CVoter has projected other parties to win 1 to 2 seats.

TV-9 Polstrat has predicted NDA emerging victorious with 17 to 19 seats while the SDA will win 11 to 13 seats. As per this exit poll, other parties in the Union Territory will not win a single seat.

The Puducherry Assembly elections were held in a single phase on April 6 simultaneously with the Tamil Nadu and Kerala assembly elections. The counting of votes for the 30-seat assembly and the results will be declared on May 2. The polling took place across 1,558 polling stations, including 952 main and 606 auxiliary polling stations in 635 locations where a total of 10,04,507 electors were open to exercise their right to vote. The Union Territory saw a voter turnout of 81.70 per cent. The UT is witnessing a battle between the Congress-DMK alliance and the BJP, AIADMK, AINRC-led NDA alliance. The fate of 324 candidates across 30 Assembly segments including five reserved constituencies will be decided on May 2.