The Congress party on Thursday released its second list of 49 candidates for the Bihar Assembly elections, fielding Shatrughan Sinha's son Luv Sinha from Bankipur. Luv on Friday took to his Instagram handle and shared a beautiful picture of him seeking blessings from mother Poonam Sinha. He wrote, "Election 2020: No step should be taken without taking mother's blessings."

"The learning I got from my father since childhood, and the experience that I gained, every election I took, was probably for today. I am thankful to @incindia and every senior leader of Mahagathbandhan who thought me fit for this responsibility, I am here to serve Bihar and Bankipur, I pray for your cooperation and support. Jai Bihar, Jai Hind," Luv further wrote.

Sharing brother's post, Sonakshi Sinha on her Instagram story wrote, "All the best bade bhaiya. We need more young people and more importantly good people to step forward for our country. Hope this is the beginning of a great journey for you." [sic] 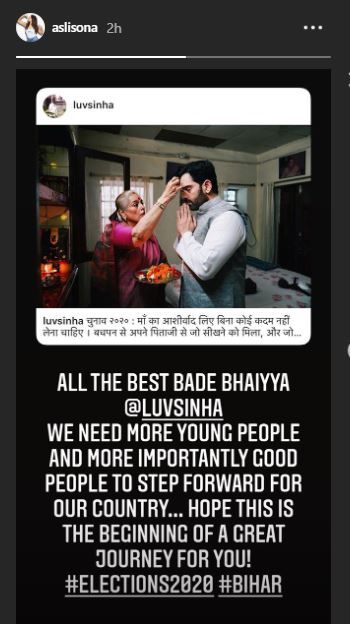 The junior Shotgun has been given the ticket from Bankipur, which goes to poll in the second phase of elections on November 3.

Interestingly, Shatrughan Sinha, who parted ways from the BJP ahead of the Lok Sabha elections 2019, and joined Congress had contested unsuccessfully from the Patna Sahib constituency. Now his son Luv has been pitted against BJP's three-time MLA Nitin Navin from Bankipur, which falls under Patna Sahib. Luv Sinha's debut in politics comes after his Bollywood debut in 2009 with Sadiyaan.

Bankipur seat is going to be a tough fight for the junior Shotgun as it is considered as BJP's citadel. The sitting BJP MLA Navin has won the seat since 2005 and his father Navan Kishor Prasad Sinha had held the seat from 1995 for the BJP.

On people's demand in general & our own party Congress's command in particular, the most deserving, actor, filmmaker, courageous, positive & energetic @LuvSinha makes his foray into politics. 'Bihari Babu's son Luv's direct entry for filing nomination as 'Bihar putr' from our

The Bihar Assembly has a strength of 243 members out of which 38 seats are reserved for SC and two for ST. In the 2015 state polls, the Mahagatbandhan comprising RJD, JD(U) and Congress won a whopping majority with 178 seats under the leadership of Nitish Kumar. On the other hand, the BJP-led alliance won from only 58 constituencies. On July 26, 2017, Nitish Kumar stepped down as the CM citing irreconcilable differences with RJD over corruption allegations against Tejashwi Yadav and joined hands with its former ally BJP.

The upcoming Assembly election will be held in three phases - October 28, November 3 and November 7.  To decongest polling stations, the voting time has been increased by one hour. Thus, people will be able to cast their votes from 7 am to 6 pm barring for the areas affected by Left-wing extremism. The counting of votes will take place on November 10.