As Tamil Nadu gears up for the results of the 2021 Assembly elections which will be declared on May 2, Republic-CNX Exit Poll has projected the DMK- led alliance to emerge victorious

As Tamil Nadu gears up for the results of the 2021 Assembly elections which will be declared on May 2, Republic-CNX Exit Poll has projected the DMK- led alliance to emerge victorious

As Tamil Nadu gears up for the results of the 2021 Assembly elections which will be declared on May 2, Republic-CNX Exit Poll has projected the Dravida Munnetra Kazhagam (DMK) led alliance comprising of Congress & others to emerge victorious over the AIADMK & its allies allowing MK Stalin to likely become the CM for the first time ever. DMK and its allies are projected to easily cross the halfway mark in the 234-seat Assembly and obtain absolute majority with MK Stalin's party projected to emerge as the single-largest party. Apart from DMK & allies, the incumbent AIADMK (NDA's 'big brother' in Tamil Nadu) is squaring off against actor-turned politician Kamal Haasan's MNM which has allied with AISMK, IJK and TTV Dhinakaran's AMMK which has joined hands with SDPI, Asaduddin Owaisi's AIMIM and 'Captain' Vijaykanth's DMDK. 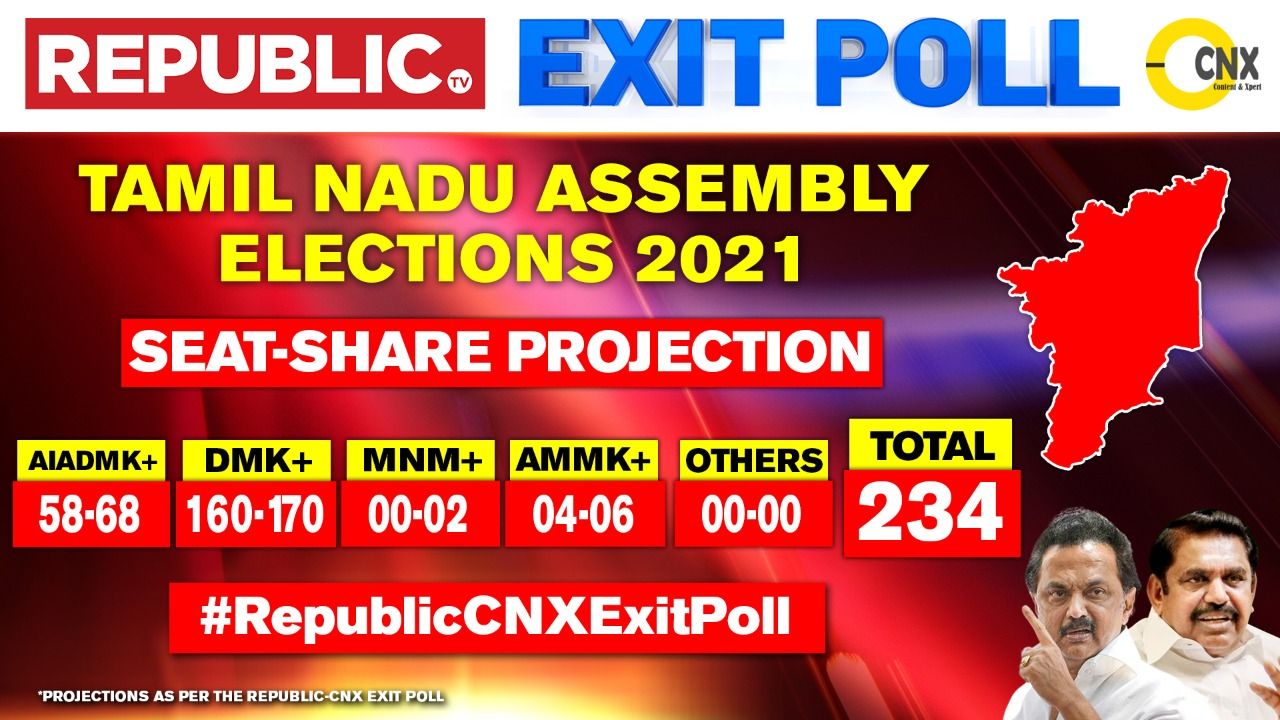 #RepublicCNXExitPoll | AIADMK came back in the fight because of solid groundwork by Amit Shah, PM Modi. Tamil Nadu will see a sea of change: @RatanSharda55 - Political Analyst & Author https://t.co/RZHKU3wOei pic.twitter.com/7yAw4koXKv

The Madras High Court pulled up the Election Commission of India (ECI) for not stopping political parties from conducting rallies even as COVID cases continued to surge and noted that the EC was singularly responsible for the second wave of the pandemic. Chief Justice Sanjib Banerjee noted that it was distressing to remind constitutional authorities that public health was paramount and warned of stopping the counting of votes on May 2 if COVID protocols were not followed. Madras HC further directed the EC and Tamil Nadu's CEO to hold meetings with the state's health secretary in order to create a plan which will ensure that COVID protocols were followed and asked ECI to submit the blueprint before the Court on April 30. Chief Justice Sanjib Banerjee opined that the ECI officials should be 'booked on murder charges probably' for allowing political rallies amid COVID-19.

"Were you on another planet when the election rallies were held?", Chief Justice of Madras High Court asked ECI.

"Public health is of paramount importance and it is distressing that constitutional authorities have to be reminded in such regard. It is only when a citizen survives that he'll be able to enjoy the rights that a democratic republic guarantees", Chief Justice told ECI.

Tamil Nadu polls were set apart by the medley of alliances and the freebies offered in the manifestos. The two warring factions in AIADMK - of Deputy CM O Pannerselvam (OPS) and CM E Palaniswamy (EPS), reconciled after the party named incumbent E Palaniswamy as its CM candidate and O Panneerselvam as the chief of the 11-member steering committee, announcing their alliance with BJP and PMK to counter a resurgent DMK and its allies Congress, MDMK, Left parties, IUML. The two major Dravidian parties are also being challenged by MNM, AISMK, IJK and AMMK-AIMIM-SDPI and other smaller parties.

Bodinayakkanur: Facing a tough re-election, Deputy CM O Pannerselvam (OPS) will face off DMK’s Thanga Tamilselvan in his constituency. Inspite of holding Bodinayakkanur from Theni district since 2011, OPS will face a tough poll battle as he is pitted against Tamilselvan who was once a trusted aide of Jayalalithaa. Moreover, OPS who had rebelled against Sasikala's choice EPS as the CM candidate, is widely being seen as not able to hold his seat. The two-time CM and AIADMK co-convener has since then buried his hatchet with EPS, often jointly campaigning with him across the state.

Dharapuram: Buoyed by the sucess of his 'Vetrivel yatra' to "expose" the Karuppar Kootam that "denigrated" Kanda Sasti Kavacham in praise of Lord Muruga and the DMK "which lent support" to the group, BJP state chief L Murugan seeks to win Dharapuram in Erode. While Murugan hails from Namakkal, he faces DMK's Kayalvizhi, MNM's Charli A and AMMIK Kalarani. In 2011 election, K Ponnusamy of AIADMK had won the Dharapuram seat by a margin of 15,025 votes, while Congress' VS Kalimuthu trounced him in 2016.

Aravakurichi: Fielding 'Singham of Karnataka' IPS officer-turned-neta K Annamalai, the saffron party is counting on his clean image and tough police action in Chikkamangaluru to tackle DMK's Elango. Annamalai has recently attracted an FIR for threatening to 'beat up' DMK's Karur candidate - Senthil Balaji - who is the sitting Aravakuruchi MLA and recently switched from AIADMK to DMK.  Annamalai - the former Deputy Commissioner of Police (Bengaluru South) who had quit IPS at the age of 35 in 2019 - joined the BJP in August.

Coimbatore South: In a rare four-way battle, Superstar and MNM founder Kamal Haasan faces BJP's  Vanathi Sreenivasan, AMMK's R Doraisamy and Congress' Mayura S Jayakumar. While Coimbatore South is an AIADMK bastion, AMMK's R Doraisamy who had won the seat in 2011 on an AIADMK ticket is set to give the superstar a tough battle. Banking on MNM vice president R Mahendran's good Lok Sabha performance in Coimbatore South, Kamal Haasan is seeking to woo the largely urban, upper-caste voters in the town.

Thousand Lights: DMK-turned-Congress-turned-BJP leader Khushbu Sundar has her work cut out facing popular DMK leader Dr Ezhilan, who was M Karunanidhi's physician. This Chennai-based constituency has been held by DMK President M K Stalin four times, before he shifted to Kolathur. With a sizeable Muslim population, Khushbu Sundar may be able to woo them inspite of her saffron party ticket, yet the advantage is with DMK.

While the BJP is looking to make inroads into the southern state with the help of AIADMK and its ally PMK, Congress is eyeing to improve its performance from 2016 and bolster DMK's chances along with allies CPI, CPIM, VCK, MDMK, IUML, MMK. Actor-turned politician Kamal Haasan, who is debuting in Tamil Nadu politics, is leading an alliance comprising of his party Makkal Needhi Maiam (MNM), All India Makkal Samathuva Katchi (AISMK) and Indhiya Jananayaga Katchi (IJK). TTV Dhinakaran's AMMK has allied with former  LoP in Tamil Nadu assembly 'Captain' Vijayakanth's DMDK, Asaduddin Owaisi's AIMIM and SDPI.

To understand that which party has the edge after voting in the state, CNX, a Delhi based research & survey agency, conducted the exit poll survey at the polling booths in West Bengal. The focus of the survey was to gauge the mood of the ordinary people  aam admi  on the street. Finding out the opinions of the man on the street was the major concern of the survey.

A list of questions was prepared by the Republic-CNX team to understand the possible voting behavior of the Bengali people in the assembly elections in the state.

A quantitative survey using a structured questionnaire was administered randomly to 35,280 men and women from section A and section B households, in the age group of 18 to 60. The survey team visited all the 294 Assembly seats in the states going deep into by-lanes and meeting people from all walks of life.