A day after the Amarnath Yatra resumed, after being suspended for four days, a heavy flow of devotees has continued their journey to visit the Amarnath Shrine. 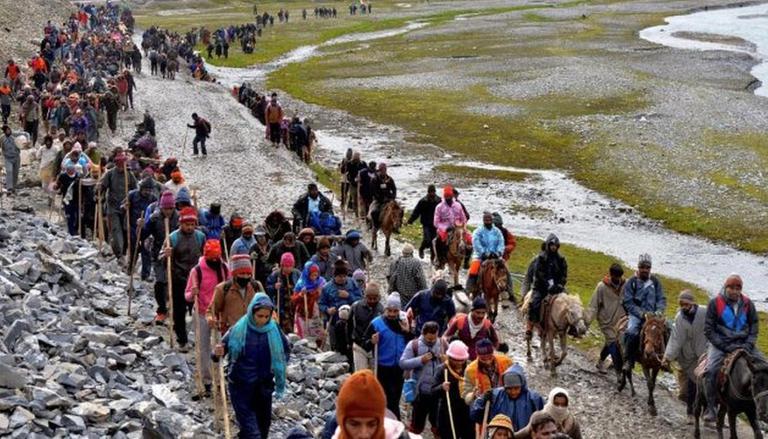 
A day after the Amarnath Yatra resumed after being suspended for days due to a flash flood triggered by a cloudburst near the cave, devotees continued their journey to visit the Amarnath Shrine.

Pilgrims in hundreds and thousands, are full of energy and enthusiasm to recommence their pilgrimage and take 'darshan' of the shrine housing the shiva lingam.

The Amarnath Yatra resumed on the Baltal route in Ganderbal district on Tuesday after a four-day suspension following flash floods that claimed 16 lives and left several injured, officials said.

Flash floods near the shrine on July 8 left at least 15 people dead and over 30 missing, forcing the temporary suspension of the pilgrimage.

Officials of Shri Amarnathji Shrine Board (SASB) that manages the affairs of the Yatra said that so far over 1.28 lakh pilgrims have performed the Yatra, and today (July 13) another 6415 pilgrims have left Jammu for the valley.

The annual 43-day yatra commenced on June 30 from the twin base camps, the traditional 48-km Nunwan-Pahalgam in south Kashmir's Anantnag and 14-km shorter Baltal in central Kashmir's Ganderbal. The yatra is scheduled to end on August 11, on Raksha Bandhan.

On July 8, a cloudburst struck near the base camp of the holy cave shrine of Amarnath in the south Kashmir Himalayas, in which 16 pilgrims died and around 40 people went missing. After heavy rainfall, water streamed through the campsite and three langars got washed away, as per inputs.

READ | In Pics: As Amarnath Yatra resumes from Panjtarni, pilgrims journey by foot and on ponies

The cloudburst occurred at around 5.30 p.m. after which the rescue teams rushed to the spot. The water came from above and sides of the cave following a heavy downpour in the upper reaches.

The Indian Air Force (IAF) along with help and support from other agencies such as the Army, CRPF, BSF and J&K Police heroically carried out rescue operations in Amarnath following the cloudburst event.

Air Commodore Pankaj, while speaking to the media earlier, said, "The main air operations started around 8 am on July 9. The main assets we used were 4 MI 17, 4 Cheetas were also mobilised and two fix wing assets, which helped in getting manpower and other assets from other parts of the country. Despite the bad weather we managed to complete 112 missions and we rescued 123 people."