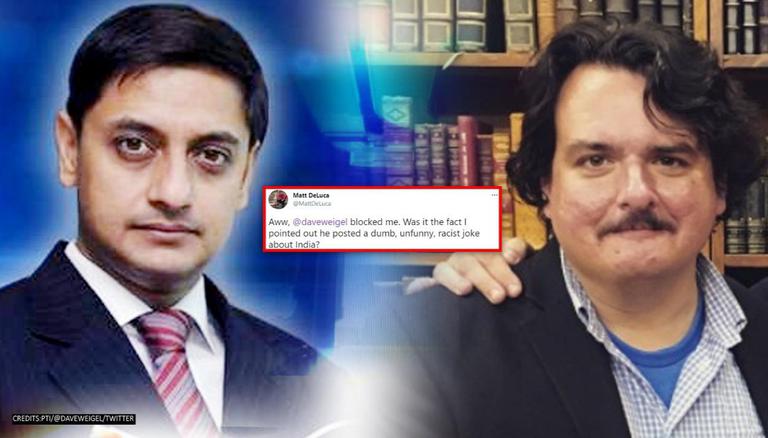 
Indian Economist Sanjeev Sanyal on Wednesday called out the blatant racism spewed by Washington Post journalist Dave Weigel against India in a recent post on his Twitter. In the now-deleted tweet, Dave Weigel who covers politics for the publication claimed to have gotten two scam calls recently, saying that he was 'happy' to see 'Indians back in office' after the gradual decline of COVID-19 cases in the country.

“Got two scam calls today and I swear to God, my first thought was “this is good, COVID-19 cases in India must be low enough for people to go back to the office," read Dave Weigel's racist tweet.

Sharing a screenshot of the original tweet, the Principal Economic Adviser in the Ministry of Finance brought to attention the 'barely hidden racism' of Western journalists against Indians.

After people called him out over his evident racism against Indians, he went on a blocking spree. On Twitter, Netizens shared screenshots of how they were blocked after opposing his views, alleging that Washington Post's coverage of India was always accompanied with 'racist tones'.

It’s such a surprise that @washingtonpost coverage of India always has racist tones despite having champions of racial equality, like @daveweigel, working for them... pic.twitter.com/pAKMx4h3yW

Aww, @daveweigel blocked me. Was it the fact I pointed out he posted a dumb, unfunny, racist joke about India? pic.twitter.com/VcB8IGRBuY

How many of y'all got blocked by Dave Weigel on this wonderful Long Weekend???? pic.twitter.com/XHG7L4RpxJ

Notably, this is not the first time that the Washington Post journalist has escaped unscathed over his racist remarks against persons of color. Another Twitter account has accused Dave Weigel of attacking 'Black and brown people' people sharing screenshots of the journalist's war of words with an African-American lady recently. The account was also blocked shortly after it put out the tweets criticizing him. He is yet to issue an apology for his racist tweet.

Guess it’s a slow news weekend as @washingtonpost reporters are spending it attacking Black and brown people in their employer’s name. pic.twitter.com/bFsbdTFTiV

Guess Dave doesn’t like when his racism is noticed on this here public platform.@washingtonpost needs to deal with this. pic.twitter.com/C03IGqbbRC

READ | "Racism is bigger than basketball" - Jaylen Brown on racism in Boston and US
READ | Mayor under fire for rescinding order on racism, violence
First Published: 2nd June, 2021 14:19 IST
SUBSCRIBE TO US