Dairy company Amul who took to Twitter to congratulate the party over forming government in Delhi third time in a row after landslide victory in elections.

Hearty congratulations have been pouring in for the Aam Aadmi Party (AAP) after their landslide victory in the Delhi assembly elections, Joining the bandwagon was also dairy company Amul who took to Twitter to congratulate the party over forming government in Delhi third time in a row.

In a rather quirky gesture, Amul took to twitter to put out an advertisement congratulating AAP on its clean sweep. The advertisement projects a caricature of AAP leader Arwind Kejriwal clad in his muffler and 'topi' while being mounted on his iconic broom all ready to take off.

Amul's tribute to Kejriwal in 2015

Amul which has earned a reputation in the market for embarking upon topical advertisement covering relevant news affairs had also paid a tribute to Arvind Kejriwal on his crusading victory over BJP in 2015 Delhi polls whereby the Amul mascot was shown riding on a cleaning vehicle with Kejriwal. 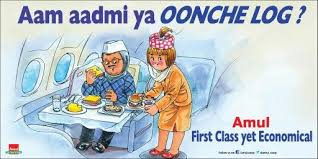 AAP has a sweeping victory

The AAP won a resounding victory in the Delhi Assembly polls with the party leading in 62 out of the 70 seats. The Delhi Assembly polls had witnessed an intense campaign by the three contending parties Congress, BJP, and AAP with 672 candidates in the fray. Amid the controversy over the delay in the vote count, the Election Commission on Sunday evening declared the voter turnout to be 62.59 per cent in the national capital and declared AAP victorious, winning by a large margin.

In the previous elections, the AAP had won an astounding 67 seats in the first big jolt to the BJP after Narendra Modi's sensational triumph in the 2014 Lok Sabha elections. BJP had managed to win just three seats. Kiran Bedi, a former AAP leader among other achievements, was the BJP's CM candidate in the ill-fated election.