Arvind Kejriwal Reiterates Stance On Providing Free Delhi Metro Rides To Women Even As Centre Rejects Proposal. Here's What He Had To Say

Minutes after the Centre rejected AAP's government proposal of providing free Delhi Metro rides for women, Delhi CM Arvind Kejriwal took to Twitter and said that Delhi metro has submitted its proposal to the Centre.

Minutes after the Centre rejected AAP's government proposal of providing free Delhi Metro rides for women, Delhi CM Arvind Kejriwal took to Twitter and said that Delhi metro has submitted its proposal to the Centre. He added that "in principle" Delhi metro's proposal is agreeable to the AAP government, however, it is studying details.

Reiterating his stance, Arvind Kejriwal wrote, "I repeat that as announced the Delhi government is committed to provide free metro rides to women". 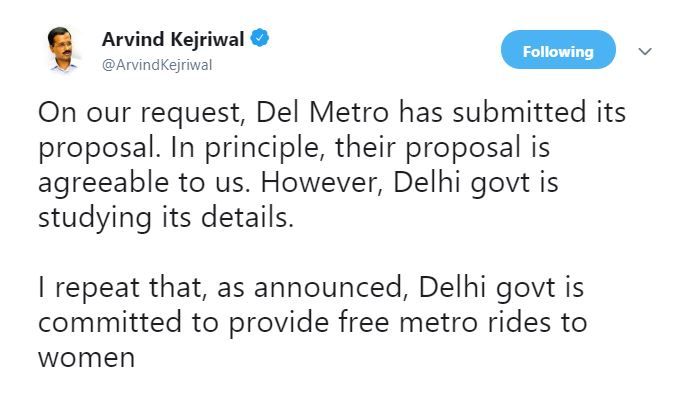 In a response to questions by TMC MP Saugata Roy in the Lok Sabha, Union Housing & Urban Affairs Minister Hardeep Singh Puri denied that Union Government has any proposal for free rides for women in Delhi Metro. He also denied being approached by the Delhi government for getting approval on the proposal.

"The safety of women is the most important thing for the AAP government. Keeping this in mind, the government has decided that in Delhi all Delhi Transport Corporation (DTC) and cluster buses and the Metro will be free for women so that the maximum number of women can use public transport. This is said to be the safest for women. They are not able to use these services also because of the increase in Metro fares," Kejriwal had said.

Meanwhile, there has been massive backlash for Arvind Kejriwal with the Opposition alleging "freebies" for the people of Delhi ahead of the elections. The announcement came by the AAP government months ahead of the Delhi Assembly elections scheduled to be held later this year.

Delhi BJP chief Manoj Tiwari concurred with the concerns raised by Mr Sreedharan and said that the Kejriwal government should pay heed to him and review its proposal.