As floods continue to wreak havoc in Assam, Karimganj district has been witnessing severe waterlogging with as many as 90,000 people affected. 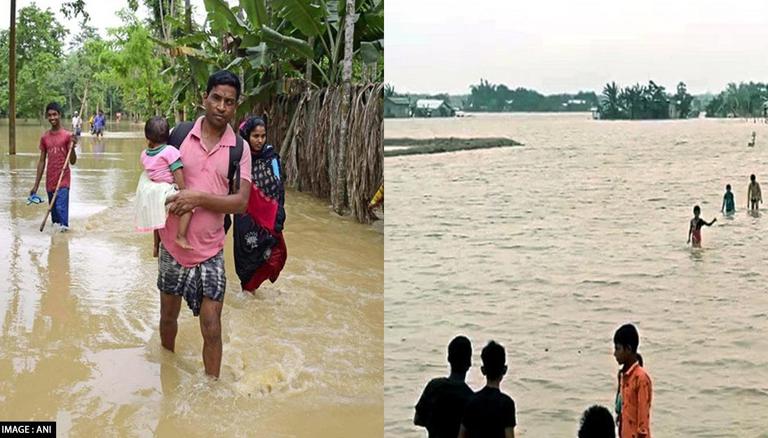 
As severe floods continue to wreak havoc in Assam, Karimganj district witnessed major waterlogging that has submerged many parts of the area. As many as 90,000 people have been affected by the alarming water levels of Kushiyara, Longai and Singla rivers flowing above the danger mark. New areas including the Karimganj town is also experiencing rising water levels due to the heavy rains.

In the Karimganj town area, the flood waters entered many roads and business institutions. Furthermore, the floods have led to landslides, claiming 71 lives so far in the state. Assam has been seeing major flooding and landslides for eight days since June 13.

READ | Assam floods: Rescue ops continue for 4th day in a row as Indian Army steps to the fore

Assam Chief Minister Himanta Biswa Sarma chaired a review meeting on the ongoing flood situation in the state on June 20 and discussed the flood situation and disaster management preparedness with deputy commissioners and other civil servants.

Reviewed #AssamFlood situation in a VC with DCs in presence of my Cabinet colleagues, senior Govt officials and representatives of @adgpi, @RailMinIndia, @NDRFHQ, etc.

In a tweet, Assam CM Sarma also informed that the situation in the state was being monitored by the Centre and Union Home Minister Amit Shah. Assam CM Himanta Biswa Sarma took to twitter to thank the Home Minister for his continuous inquiry regarding the critical flood situation in Assam. The Union Minister also stated that to check the extent of the damage caused by the floods, a team of officials will soon be sent by the Ministry of Home Affairs.

Hon HM Shri @AmitShah ji called twice since morning to enquire about the flood situation in Assam. He informed that a team of officials shall soon be sent by Ministry of Home Affairs to assess the damages caused by the natural calamity.

Grateful to HM for his help.

Following the incessant rainfall in the states of Assam, Meghalaya and Arunachal Pradesh along with the neighbouring country of Bhutan, water levels of rivers surrounding the regions have risen to a degree above the danger level. The waters of the rivers Beki, Manas, Pagladiya, Puthimari, Kopili, Jia-Bharali, and Brahmaputra are flowing above the danger level. The National Disaster Response Force (NDRF) team continues to relentlessly serve the area in rescue operations