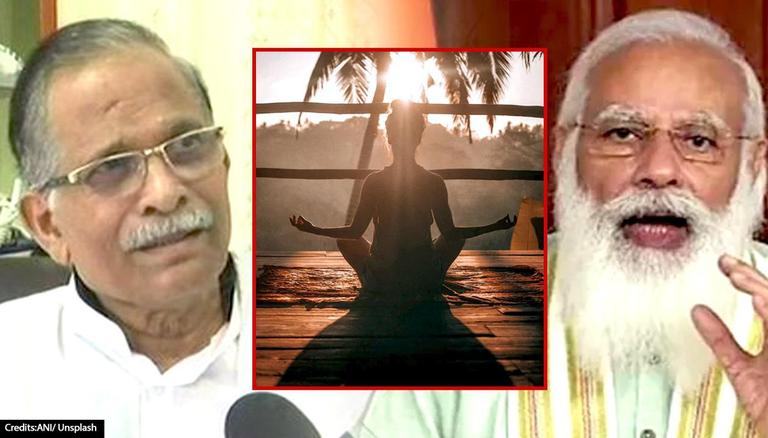 
Union AYUSH Minister Shripad Naik on Friday, May 28, that the Modi government's global public awareness campaign on yoga has aided various countries in their fight against the COVID-19 pandemic. The minister was speaking to a gathering at the inauguration of a campaign to distribute 'Ayush 64' medicine, which is used to treat COVID-19. While sharing the information, Naik wrote on Twitter, "Today along with Chief Minister of Goa @ DrPramodSawant distributed "AYUSH - 64", free medicines to COVID 19 patients. Ministry of AYUSH has launched the campaign to distribute this Ayurvedic medicine to Covid Patients nationally."

Naik stated at the occasion, where Goa Chief Minister Pramod Sawant was also present, Prime Minister Narendra Modi's government began marking International Yoga Day (June 21) seven years ago, as a result of which there was more exposure about yoga. Many countries are now realizing that yoga can help them fight COVID-19 since its benefits have been promoted and explained to them, according to the Union minister. He praised the PM as a visionary leader who disseminated knowledge about the ancient practice's physical, mental, and spiritual elements around the world.

In his remarks, Sawant stated that the state government has enlisted the services of AYUSH (Ayurveda, Yoga and Naturopathy, Unani, Siddha, and Homeopathy) doctors in the COVID-19 management program. AYUSH clinics have been established at state-run health centres to provide patients with advice on how to deal with post-Coronavirus problems, said Goa CM.

As per the official website, AYUSH-64 is an Ayurvedic formulation for the treatment of malaria that was produced by the Central Council for Research in Ayurvedic Sciences (CCRAS), the premier body for Ayurvedic research under the Ministry of Ayush. The components of this medicine were repurposed because they had antiviral, immune-modulator, and antipyretic effects. In a computer simulation of AYUSH-64, it was discovered that 35 of the 36 Phyto-constituents exhibit a high binding affinity for the COVID 19 virus. The formulation has also demonstrated to be effective in the treatment of influenza-like illnesses. AYUSH-64 has been recognized as a viable adjuvant to standard care in the management of asymptomatic, mild, and moderate COVID-19 to promote clinical recovery and quality of life, based on scientific evidence gathered from 06 clinical investigations in India.