Bikramjit Chakma informed that he came across the innovative idea of cultivating 'ber apples' from neighboring Bangladesh which has similar climatic conditions. 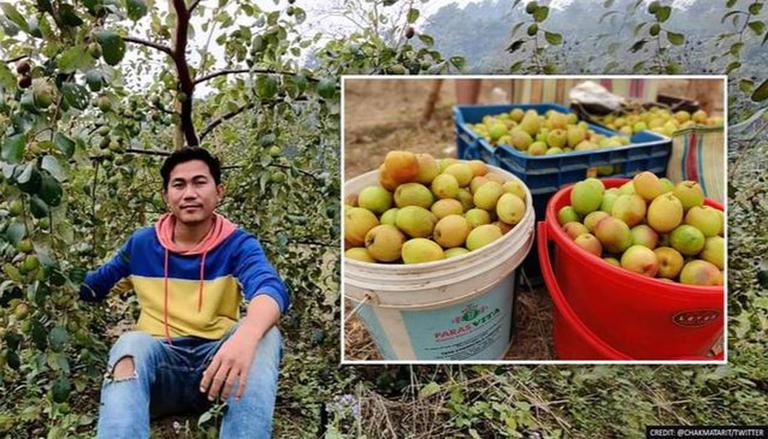 
Bikramjit Chakma, a 32-year-old Tripura resident earned a fortune following his dream of covering the tropical hills of the northeastern state with Kashmir's special ‘ber apples’. Chakma started cultivating the ‘ber apples’ as a pilot project on his 1.25 hectares of land and soon the harvesting season earned him a profit of Rs. 3.5 lakh.

Chakma, who lives in Tripura’s northern district Pencharthal, said that he came across the idea of cultivating ‘ber apples’ in Tripura from the neighboring country Bangladesh which has a similar kind of climate, and wanted to try his luck.

Chakma said, “I saw on the internet that ‘ber apples’ are cultivated in abundance in Bangladesh with very good yields.”

Chakma bought 1,300 saplings worth Rs. 2.5 lakh from West Bengal and planted them in March 2020. In January the yield was harvested and Chakma earned Rs. 6 lakh by selling the fruits in the market. The Tripura man harvested 40 quintals of 'ber apples' out of which 12 quintals were sold to the wholesale market and the remaining were sold at the open market at an average price of Rs. 115-120 per kg. Bikramjit Chakma also informed that his uncles and cousins on the other hand earn Rs. 12,000 per year by cultivating potatoes and radish on the same piece of land.

Bikramjit Chakma from Pecharthal used 6 acres of land to plant 820 Kashmiri Apple Ber trees,selling an avg of 12 kgs from 1 tree @Rs 100/kg,earning him Rs 9,84,000 in just one year!
Now the role model of my Village@mygovtripura
Sir @Pranajitsinghar#DoublingFarmersIncomeBy2022 pic.twitter.com/GX4zIkydwE

Chakma said, "We never thought that the sapling I bought would bear so much fruit. With proper care and watering, we hope to harvest close to 80 quintals next year."

Along with profit, Chakma gained a huge acclaim from Chief Minister of Tripura Biplab Kumar Deb for his innovative idea. The Chief Minister opined that Chakma's 'Aatmanirbhar' idea would inspire others in the state as well.

Biplab Kumar Deb said, "The young man has achieved success by applying the fancy ideas in farming with his uncles. He cultivates Kashmiri apple ber trees in 6 Kani areas. Bikramjit is optimistic that the trees will bear double fruit next year."

Chakma's idea has given hope to horticulturists of Tripura who are hopeful that the cultivation of 'ber apples' would evolve as a productive and profitable livelihood for the unemployed farmers. Former Director of Horticulture in Tripura, Baharul Islam Majumder is also optimistic that 'ber apples' along with other fruits can be cultivated in the unused lands of Tripura and emerge as a profitable occupation. Majumder also requested the government to create a long-term plan for horticulture and curate special packages for the farmers.