The Border Security Force exchanged sweets and greetings with Border Guard Bangladesh on the occasion of Bakrid as a friendly gesture. 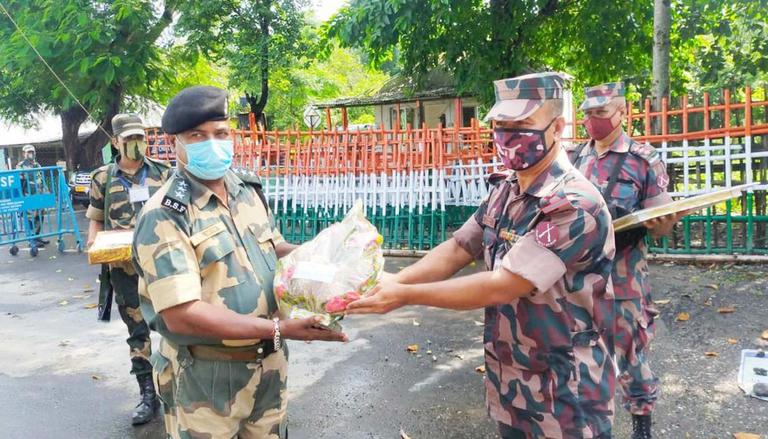 
The Bengal Frontier of the Border Security Force (BSF) on Wednesday exchanged sweets and greetings with Border Guard Bangladesh (BGB) on the occasion of Eid-ul-Adha. The sweet exchanges were done at all Border Out Posts (BOPs) along the International Border in Bengal. The BGB and BSF exchange gifts and greetings during religious and national celebrations as a tradition with an aim to bolster friendly ties between the two countries.

The North Bengal Frontier of the BSF took to their official Twitter handle to share the same. Sharing pictures from the friendly exchange at an outpost, they wrote, “greetings on the occasion of Eid-al-Adha.” In a statement, the BSF said, that the ‘friendly gesture’ between the two border guarding forces is aimed at maintaining ‘peace, tranquillity, harmony, mutual brotherhood and affection' between the two countries.

FTR HQ BSF North Bengal July 21, 2021.
Greetings on the occasion of Eid-al-Adha.
BSF, serving the frontiers of our motherland with profound passion and sharing the bond of true friendship with BGB #LongLive_BSFBGB_Friendship, @BSFNBFTR wishes a very happy #Eid-al-Adha to everyone pic.twitter.com/3HTSXt2Y6Y

“The festival of Eid-ul-Azha (Bakrid) is a symbol of dedication and sacrifice. Sacrifice is of great importance in Islam. It is said that sacrifice your dearest thing in the way of the Lord. Spending in the way of the Lord means doing best and best deeds. Eid-ul-Adha inspires to make all kinds of sacrifices while walking on the path of truth. It is such, a auspicious month in which all the Muslims of the world perform the important pilgrim of performing Hajj in Mecca and Medina,” the BSF said in a statement.

“On the holy and auspicious occasion of this Eid-ul-Adha (Bakrid), the Border Security Force and Border Guard Bangladesh troops also greeted each other at various Border Out Posts (BOPs) on the International border of India and Bangladesh. Sweets were exchanged between Border Security Force and Border Guard Bangladesh at all Border Out Posts (BOPs) of North Bengal Frontier. This friendly gesture between the two border guarding forces will help to maintain peace, tranquillity, harmony, mutual brotherhood and affection between both the countries,” the statement added.

Earlier this month, BSF Director-General Rakesh Asthana completed a two-day visit to the India-Bangladesh border in order to review the security in the region. The BSF DG reviewed the area during his visit and was briefed by Army generals about the emerging challenges on the border sites. During his visit, DG Rakesh Asthana also inaugurated two new Border Out-Posts and a 120-men barrack at SHQ Jalpaiguri for the accommodation of soldiers during the tour.