A team of the Border Security Force (BSF) on Thursday apprehended four Pakistani fishermen and seized 10 Pakistani fishing boats from the Indo-Pak border. 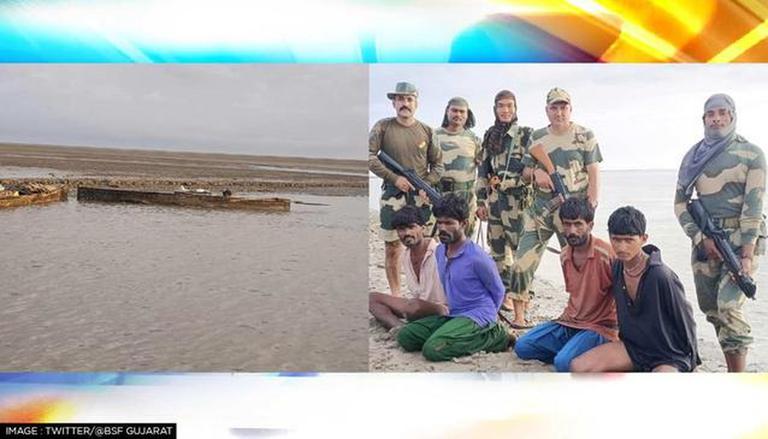 
Foiling yet another infiltration attempt by the Pakistani side, a team of the Border Security Force (BSF) on Thursday apprehended four Pakistani fishermen and seized 10 Pakistani fishing boats for trying to sneak into the Indian territory through one of the water channels near the Indo-Pak border.

This came after a special ambush party of the BSF Bhuj unit observed certain movements between border post number 1165 and 1166 following which it cordoned down the entire area. After the search operation, 4 Pakistani fishermen along with their 10 fishing boats were seized by the team near one of the water canals of Harami Nalla near the Indo-Pakistan border in Gujarat's Kutch district. While a search operation is underway, nothing suspicious has been recovered from the fishing boats.

In the wee hours of 07th July 2022, a special ambush party of BSF Bhuj apprehended 04 Pak fishermen & seized 10 Pak fishing boats while they were sneaking into Indian territory through one of the water channels of Harami Nalla near Indo-Pak border in Kutch District of Gujarat. pic.twitter.com/nrjqyTOdSI

It is pertinent to note that this is not the first time that the BSF has nabbed Pakistani intruders from the border areas. In several other instances, the Border Security Force (BSF) continued to apprehend Pakistani fishermen preventing them from trying to invade Indian territories through the waterways.

In an incident that took place a week ago, two Pakistani fishermen were apprehended by the BSF in the same area. While the two fishermen were arrested after a long chase, one of them also sustained bullet injuries in his ankle while trying to escape toward Pakistan, informed the BSF in a statement. Furthermore, nine Pakistani boats were seized by the security forces.

India and Pakistan exchange lists of prisoners and fishermen

Earlier on Friday, India and Pakistan, in a bid to demand the release of civilian prisoners and fishermen from each other's custody, exchanged the list of such people in custody. While India on one hand called for an immediate release of 536 Indian fishermen and three civilian prisoners, Pakistan has also shared a list of 49 prisoners and 633 fishermen, who claimed to be either Indians or believed to be Indians.

Informing about the same, the External Affairs Ministry in a statement said,

"Pakistan was asked to expedite the release and repatriation of 536 Indian fishermen and 3 Indian civilian prisoners to India who have completed their sentence and whose nationality has been confirmed and conveyed to Pakistan."