Chief of Defence Staff Gen Bipin Rawat and his wife Madhulika Rawat succumbed to injuries on Wednesday after an IAF Mi-17 V5 helicopter carrying them crashed. 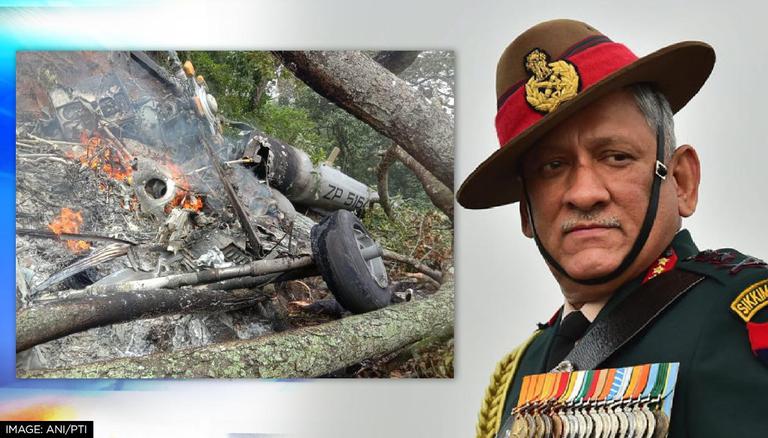 
In a tragic development, India's Chief of Defence Staff Gen Bipin Rawat and his wife Madhulika Rawat succumbed to injuries on Wednesday after an IAF Mi-17 V5 helicopter carrying 13 crashed in Tamil Nadu's Coonoor. All communications with the chopper were lost just before the crash between Coimbatore and Sulur in Tamil Nadu. 63-year-old Rawat along with his wife and his staff was travelling to Wellington Staff College to deliver a lecture at 2:45 PM. One person survived the crash, Group Captain Varun Singh SC. As per reports, the mortal remain of CDS Rawat and other Armed Forces personnel killed in the chopper crash are expected to arrive in Delhi by evening tomorrow.

IAF in a statement said, "With deep regret, it has now been ascertained that Gen Bipin Rawat, Mrs Madhulika Rawat and 11 other persons on board have died in the unfortunate accident."

With deep regret, it has now been ascertained that Gen Bipin Rawat, Mrs Madhulika Rawat and 11 other persons on board have died in the unfortunate accident.

As per sources, the crew onboard includes - CDS Gen Bipin Rawat, his wife Mrs. Madhulika Rawat, Brig LS Lidder, Lt Col Harjinder Singh, NK Gursewak Singh, NK Jitendra Kumar, L/Naik Vivek Kumar, L/Naik B Sai Teja and Hav Satpal. Four bodies have been recovered from the site and three injured persons have been rescued from the crash site. Defence Minister Rajnath Singh has briefed PM Modi regarding the crash while Army chief Gen M Naravane is monitoring the situation from DGMO. Indian Air Force has initiated an inquiry into the crash. Previously, General Rawat had miraculously survived a single-engine helicopter crash in 2015, minutes after it took off from Nagaland.

READ | IAF Helicopter Crash: Sequence of events that led to the crash with Gen Bipin Rawat aboard

With a distinguished Army career spanning 42 years, Gen Bipin Rawat was appointed as India's first Chief of Defence Staff on 31 Dec 2019, a day before his retirement. After graduating from the National Defence Academy in 1978, he was commissioned into the Fifth Battalion of the Eleventh Gorkha Rifles of the Infantry, the Battalion which was Commanded by his father Lt. General Laxman Singh Rawat. Handling multiple operational portfolios, Rawat commanded an Infantry Battalion along the Line of Actual Control in the Eastern Sector and a Rashtriya Rifles Sector in the Kashmir Valley.

He was also assigned to Command an Infantry Division along the Line of Control in Jammu and Kashmir and was Corps Commander in the North-East. As an Army Commander, he was responsible to oversee operations in the Desert sector, along the Western front. Prior to assuming charge as CDS, he has held multiple portfolios like General Staff Officer at Military Operations Directorate, the Colonel and later Deputy Military Secretary in the Military Secretary's Branch, the Major General Staff of the Eastern Theatre, Vice Chief of the Army Staff. He was also the Chief of the Army Staff from 31 Dec 2016 to 31 Dec 2019 and was succeeded by Gen MM Naravane.

Gen Rawat has been conferred several Presidential Awards which include the PVSM, UYSM, AVSM, YSM, SM and the VSM. Academically, Gen Rawat is a graduate of Defence Services Staff College (Wellington) and the Command and General Staff Course, Fort Leavenworth (USA). The General was awarded the 'Doctorate of Philosophy' (Ph.D) for his research on 'Military Media Strategic Studies' by the Chaudhary Charan Singh University, Meerut. Rawat is survived by two daughters.