Congress and NCP slammed the Centre for nominating Lok Sabha MP Sadhvi Pragya Thakur to the Parliamentary Consultative Committee of the Defence Ministry.

On Thursday, Congress and NCP slammed the Centre for nominating Sadhvi Pragya Thakur, the Lok Sabha MP from Bhopal to the Parliamentary Consultative Committee of the Defence Ministry. The Committee has 21 members in total and is headed by Defence Minister Rajnath Singh. Contending that Thakur was a “terror accused” and “Godse fanatic”, Congress claimed that the move was an insult to India’s defence forces, MPs and every citizen of the country. NCP too criticised this move by stating that BJP wanted to showcase a “new” face of India by naming an accused person as a defence advisor. Moreover, the Sharad Pawar-led party mentioned that she had been charged under stringent anti-terror provisions. 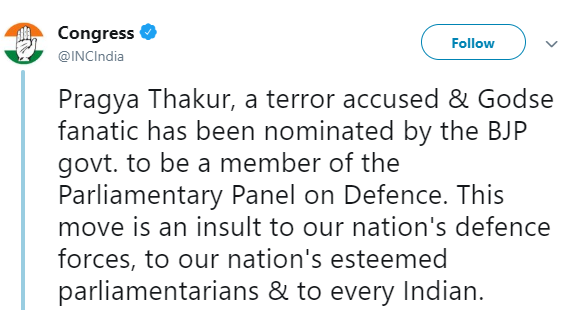 Read: 'Whatever I Do, It's In National Interest,' Says Sadhvi Pragya Thakur

Thakur, who is a prime accused in the 2008 Malegaon blast case faces trial under various sections of the Unlawful Activities Prevention Act (UAPA) and the Indian Penal Code (IPC). On December 27, 2017, a special NIA court had dropped stringent Maharashtra Control of Organised Crime Act charges against Lieutenant Colonel Prasad Purohit, Sadhvi Pragya, Sameer Kulkarni and other accused in the blast case. In April 2017, the Bombay High Court approved bail for Thakur, who the ATS had said was among the prime conspirators of the blast. Six persons were killed and 101 were injured when an improvised explosive device strapped on a motorcycle went off at Malegaon on September 29, 2008.