COVID-19: All 93 New Cases In Delhi Have Markaz Connection; Total Tally Soars To 669

Markaz attendees constituted 100% of the 93 people who tested positive for the novel coronavirus in Delhi on Wednesday.The total COVID-19 tally in Delhi is 669.

As per a Delhi government Health Bulletin on Wednesday, the national capital witnessed a spike of 93 cases taking the total COVID-19 tally to 669. Incidentally, all the 93 confirmed novel coronavirus patients are Tablighi Jamaat workers who attended the religious congregation at Markaz Nizamuddin. This implies that Markaz attendees (426) account for 63.67% of all the COVID-19 patients in Delhi. Additionally, the Delhi government revealed that a containment plan was being implemented in multiple areas such as Shahjahanabad society, Nizamuddin Basti, Mansara Apartments and Dinpur village. 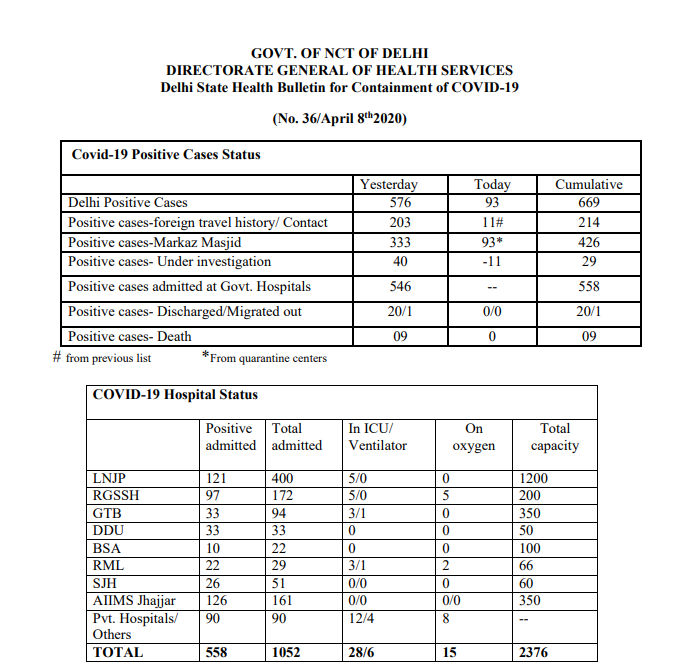 Earlier in the day, Delhi CM Arvind Kejriwal interacted with all the parliamentarians from the national capital to discuss the COVID-19 crisis. He took note of the suggestions proposed to him by the MPs. Thereafter, he announced that the Delhi government had decided to make the wearing of masks mandatory. According to him, facial masks could reduce the spread of the novel coronavirus. At the same time, he clarified that the residents can wear cloth masks as well.

What is the Markaz Nizamuddin controversy?

The controversy erupted when 24 people who had attended the religious congregation at Markaz Nizamuddin tested positive for COVID-19. Thousands of people who participated in the event travelled to various states in India, risking the spread of the novel coronavirus. According to the Ministry of Home Affairs, 1746 individuals including 216 foreigners were staying in the Markaz building as of March 21. As per the Delhi government, the religious congregation violated the prevailing orders, which prohibited large gatherings.

However, the Markaz claimed that it had not flouted the rules and discontinued the religious function after the announcement of the nationwide lockdown. Instead, it alleged that many of the attendees were stuck due to the unavailability of transport services. On March 31, the Delhi Police registered a case against Maulana Saad and other officials of Tablighi Jamaat under sections od the Epidemic Disease Act,1897 and Section 269, 270, 271 and 120-B of the Indian Penal Code. Responding to the police's questionnaire, Maulana Saad stated that he couldn't answer questions as he is under quarantine and the documents are locked in the Markaz building.

Read: Kejriwal Interacts With Delhi MPs On Coronavirus, Says 'will Have To Fight It Together'