COVID-19: Jharkhand Extends Lockdown-like Curbs Till May 27 Amid Surge In Cases

As cases have still not come under control in Jharkhand, the Government has announced to continue the strict restrictions till May 27 with aim to combat COVID. 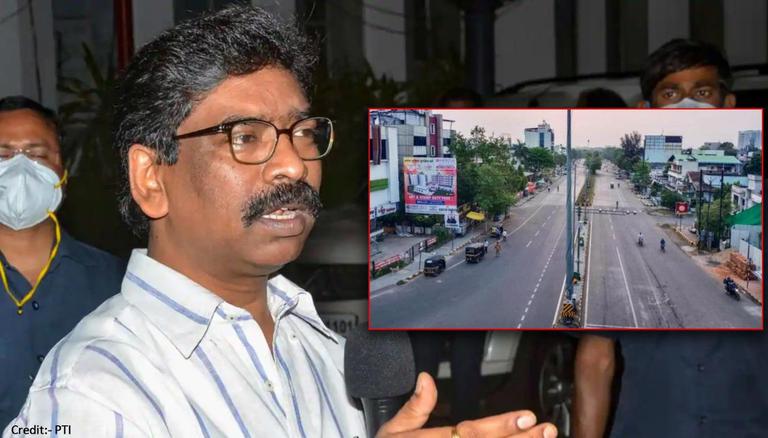 
As several parts of India are imposing strict measures against COVID-19, Jharkhand Government on Wednesday announced to extend the lockdown-like restrictions in the state till May 27. The strict measures also include compulsory 7-day quarantine for people visiting the state for over 72 hours. A high-level meeting was chaired by Chief Minister Hemant Soren with state officials.

The Chief Minister's Office (CMO) tweeted informing about the extension of 'Suraksha Saptah'.

The CMO further wrote that the interstate and intrastate bus services will not function during the 'Suraksha Saptah' or safety week. As per the state guidelines, private vehicles will only be allowed to conduct movements upon possession of an e-pass. The new guidelines have also been announced that gives permission to only 11 people for weddings.

READ | J'khand extends lockdown-like restrictions till May 27; attendance at weddings fixed at 11

The Chief Minister on Wednesday tweeted that the lockdown has been extended with an aim to break the chain of COVID spread.

The new announcement came a day before the previous restrictions were to end. The Jharkhand Government had announced strict curbs in the state earlier on April 22 that were supposed to end on May 13. Further decisions will be taken after 15 days.

The state reported 4,362 fresh COVID-19 cases and 97 deaths on Wednesday making the total tally climb to 2,96,895. In last 24 hours, as many as 8,331 patients have recovered from the disease taking the total recoveries to 2,46,608. Currently, there are 50,467 active cases in Jharkhand. The death toll has reached to 4,182, as per the health ministry. Ranchi district has been reporting a maximum number of fatalities with 36 deaths on Wednesday and it is further followed by East Singhbhum and Dhanbad.