In a heart-wrenching letter, the 8-year-old daughter of Delhi Police Head Constable thanked her father and the officials for assisting amid Coronavirus.

In a heart-wrenching incident, the 8-year-old daughter of Delhi Police Head Constable penned a letter, thanking her father and the officials for assisting amid the Coronavirus outbreak and the 21-day lockdown imposed by the government. The handwritten letter was shared on Twitter by the DCP Delhi Police.

A student of Class 4 and the daughter of Head Constable Anil Dhaka, in a scribbled letter wrote to the Police saying, "You do not sleep at night. You come late to your house or sometimes you don't come to house. I Vidhi Dhaka, the daughter of Head constable Anil Kumar Dhaka want to thank you and your staff for taking care of everyone without thinking of your own lives."

READ| Coronavirus: NSA to be slapped against persons who attack policemen enforcing lockdown in UP 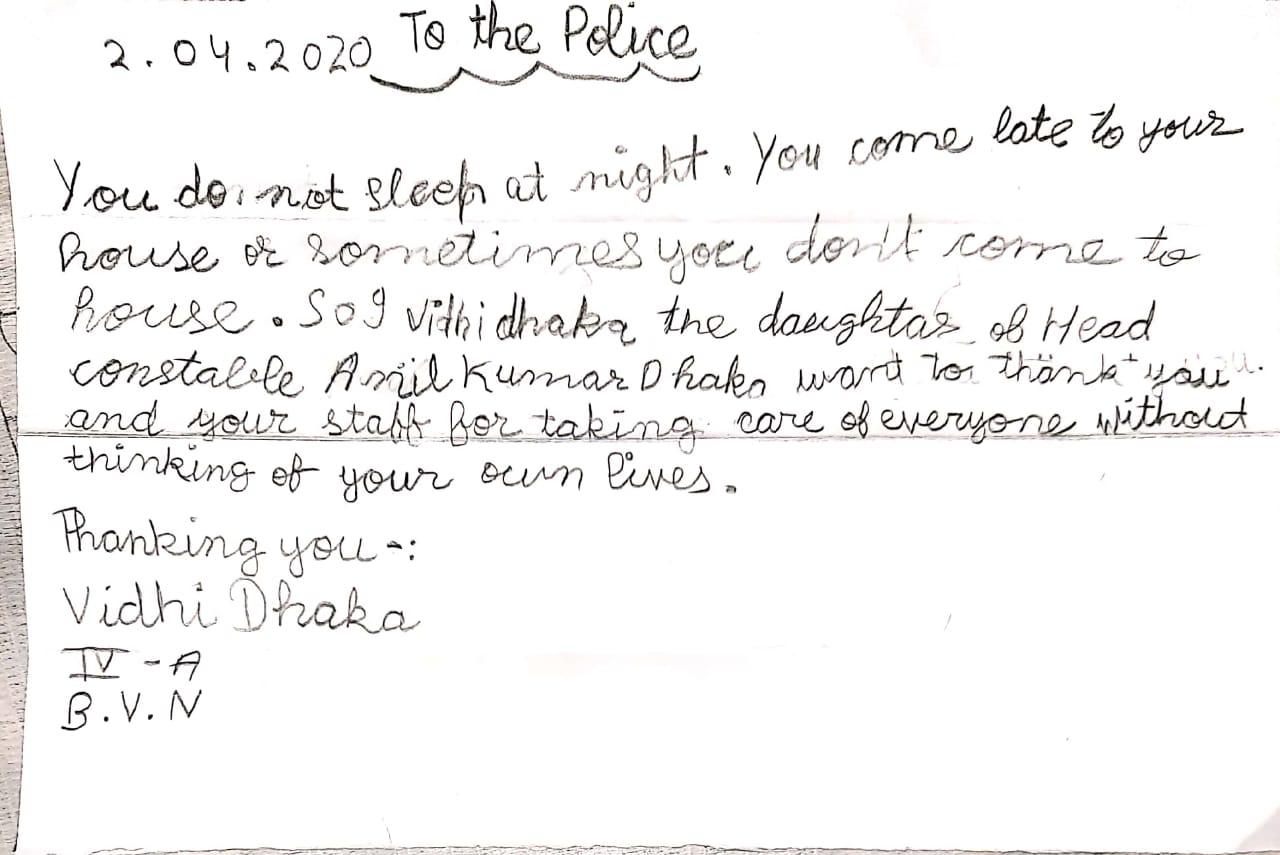 Delhi health department authorities wrote to the city police commissioner on Thursday, seeking deployment of adequate security personnel at the hospitals designated for COVID-19 treatment and the quarantine facilities in the national capital. In a letter to the police chief, Delhi Health Secretary Padmini Singla said the coronavirus patients brought from the Markaz in the Nizamuddin area and some other patients were triggering a "law-and-order problem" and "commotions" in hospitals.

It said those who had congregated inside the mosque were brought out in a "massive exercise" held from March 30 to April 1, 536 of them were sent to various hospitals after they showed symptoms and 1,810 were sent to quarantine facilities. One person from the Markaz, who was admitted at the Rajiv Gandhi Super Speciality Hospital, "attempted suicide", but was saved by the hospital staff, the letter said. Two other inmates at a quarantine facility in Narela had escaped and were tracked in Patparganj, Singla said in the letter.

PEOPLE HAVE PLEDGED SO FAR
LATEST NEWS
View all
6 hours ago
Odisha reports 63 new cases, 90 more people recover from COVID-19
6 hours ago
One more COVID-19 death in Jharkhand, total cases 521
6 hours ago
372 new coronavirus patients found in Gujarat, 20 deaths
16 mins ago
Gehlot issues instructions for holding class 10, 12 board exams
6 hours ago
Petrol to be costlier by Rs 2, diesel by Rs 1 in J&K