'No one will be spared': Dussehra Procession Mowed Down In Chhattisgarh, CM Baghel Acts Against Culprits & Cops

Terming the incident as very sad & heartbreaking, Chhattisgarh CM prayed for the speedy recovery of the injured and expressed condolences to the kin of victims 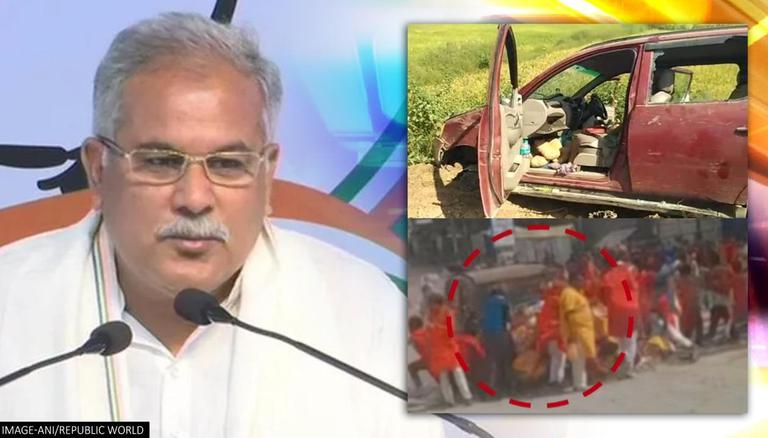 
Update at 8:00 - Speaking to reporters after the Jashpur car incident, Chhattisgarh Chief Minister Bhupesh Baghel said the Assistant sub-inspector KK Sahu has been suspended by the government, and the criminals have been arrested in the matter. Condemning the painful incident, Baghel informed that SP Collector and top officials have reached the spot to take stock of the situation.

Meanwhile, SP Jashpur Vijay Agarwal claimed that one of the two accused persons arrested in the case has died. The accused were charged with murder and culpable homicide and were being interrogated by the police.

Reacting to the deadly Jashpur Nagar incident where at least 20 people were mowed down by a speeding car on Friday, Chhattisgarh Chief Minister Bhupesh Baghel has ordered an inquiry in the matter and assured action against the guilty.

Providing an update on the car accident case in which at least 1 person died and dozens were left injured, CM Baghel informed that the culprits were immediately arrested and prima facie action was also taken against the police officers who appeared guilty. He assured that no accused person will be spared and justice will be done to all.

At least 20 people involved in the tableau celebrating Dussehra were crushed by a speeding car that allegedly carried a huge quantity of ganja. A video of the incident shows the car deliberately running over an unsuspecting group gathered for Durga idol immersion on Raigad Road in Pathalgaon.

Terming the incident as very sad and heartbreaking, Baghel prayed for the speedy recovery of the injured and expressed condolences on the unfortunate death.

Reacting to the 'painful' incident, former Chhattisgarh CM Raman Singh said the spirits of the drug mafia in the state have become 'elevated' to the extent that a religious procession could not be spared. Taking to Twitter, the BJP leader demanded the immediate removal of the Jashpur Superintendent of Police.

Singh also demanded Rs 50 lakh compensation to the kin of the deceased and immediate arrangements for the treatment of the injured.

One person died during treatment in the incident, as per sources, while dozens were left critically injured. All were taken to Pathalgaon Civil Hospital for treatment. The car was allegedly loaded with a and was on the run. It was caught after people chased the car and the driver was beaten

The car was later set on fire by the enraged people and two people were arrested by the Jashpur Nagar police.