Republic TV has accessed exclusive details in Yes Bank scam probe, which reveals that ex-CEO Rana Kapoor has invested in properties worth over Rs 2,000 Cr

Republic TV has accessed exclusive details in the Yes Bank scam investigation that is being carried out by the Enforcement Directorate (ED). Investigation reveals that former Yes Bank CEO Rana Kapoor has invested in properties in India worth over Rs 2,000 crore. The agency suspects that the kickback money was used to buy these properties in India. ED has also identified properties bought by Rana Kapoor through the proceeds of crime in the United Kingdom. The valuation of UK properties is underway.

The ED suspects that the kickback money was routed through companies directly linked to Rana Kapoor’s family. According to the remand copy accessed by Republic TV, Rana Kapoor, who was arrested on Sunday, was questioned over a Rs 600 crore loan from a non-banking financial company, which is an associate company of DHFL, to DoIT Urban Ventures Pvt Ltd — a company owned by Kapoors family. 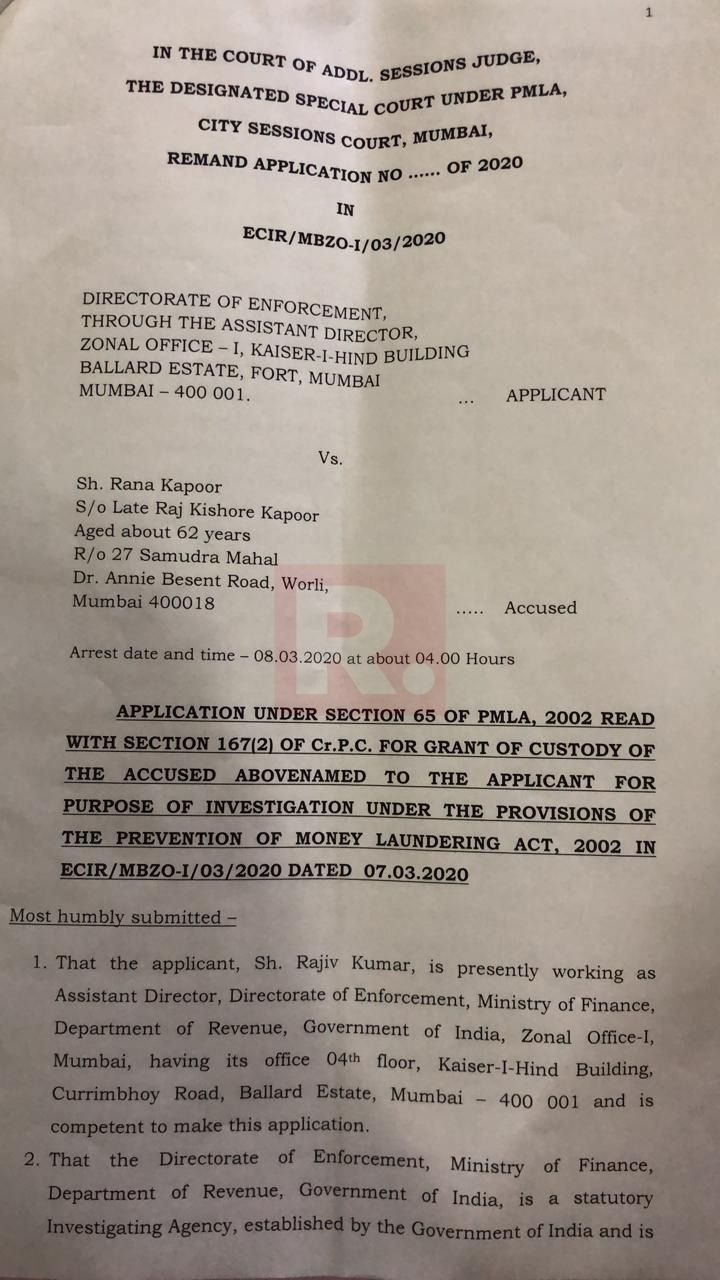 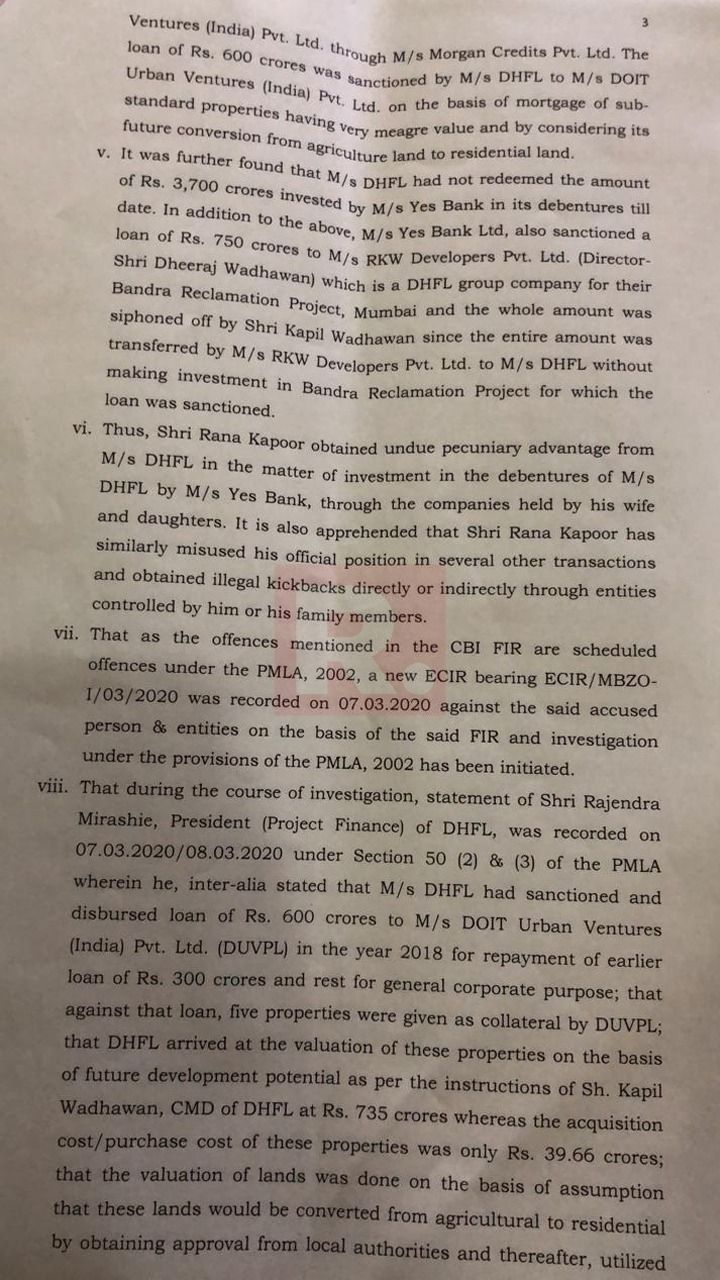 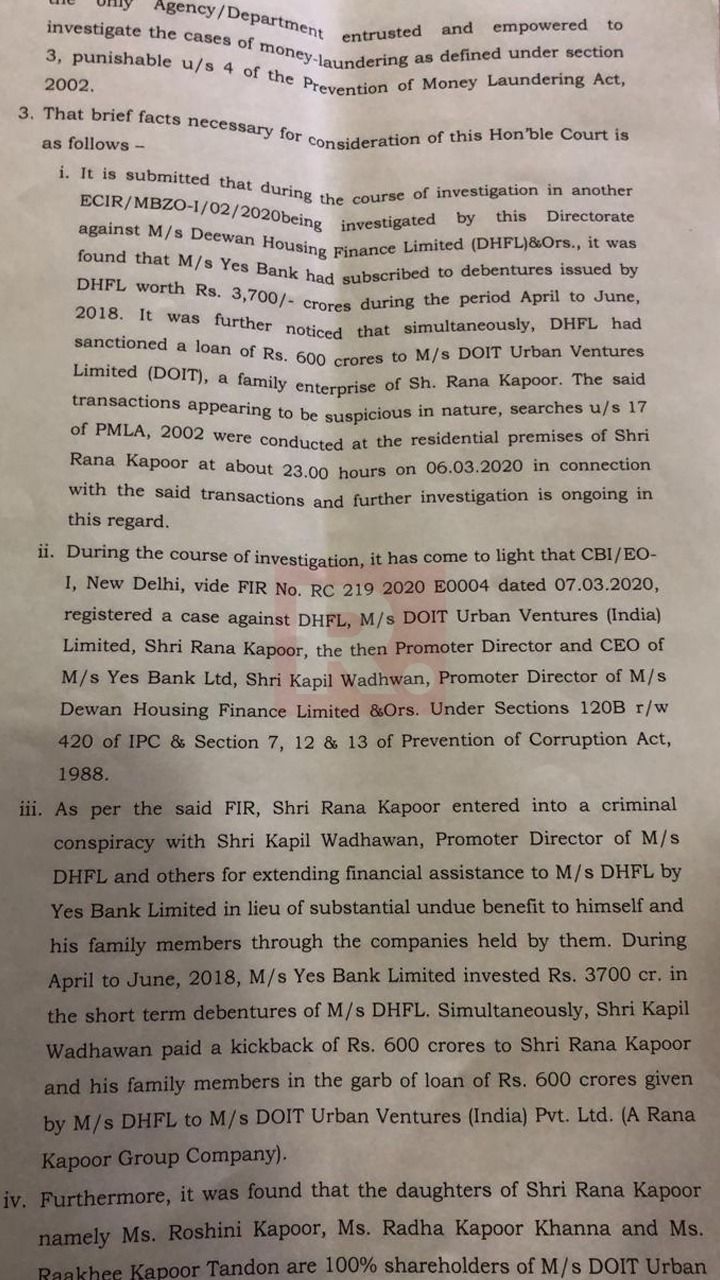 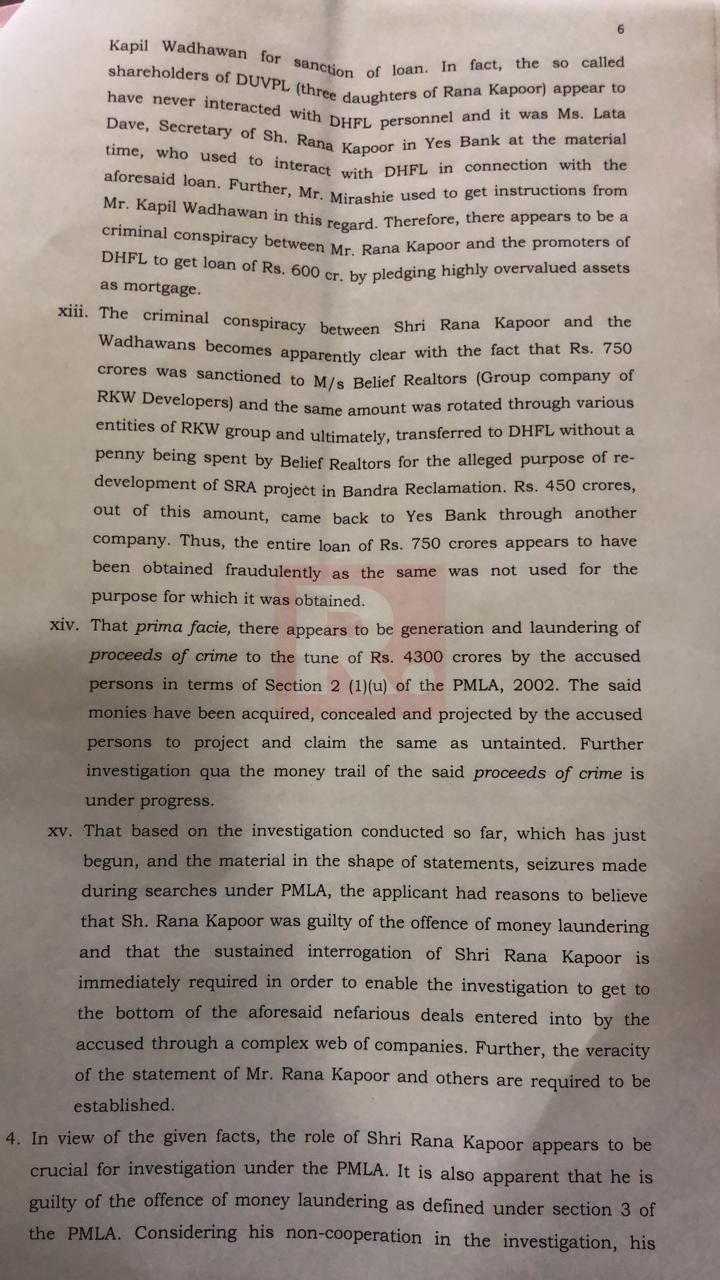 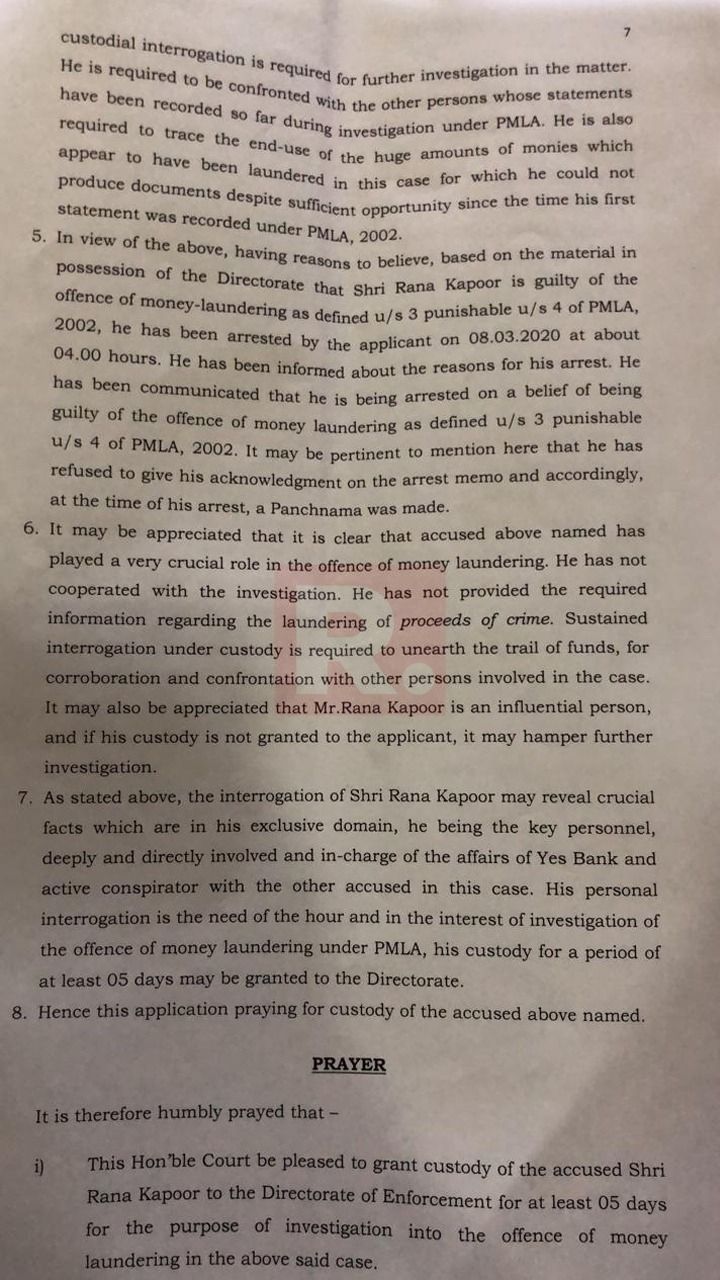 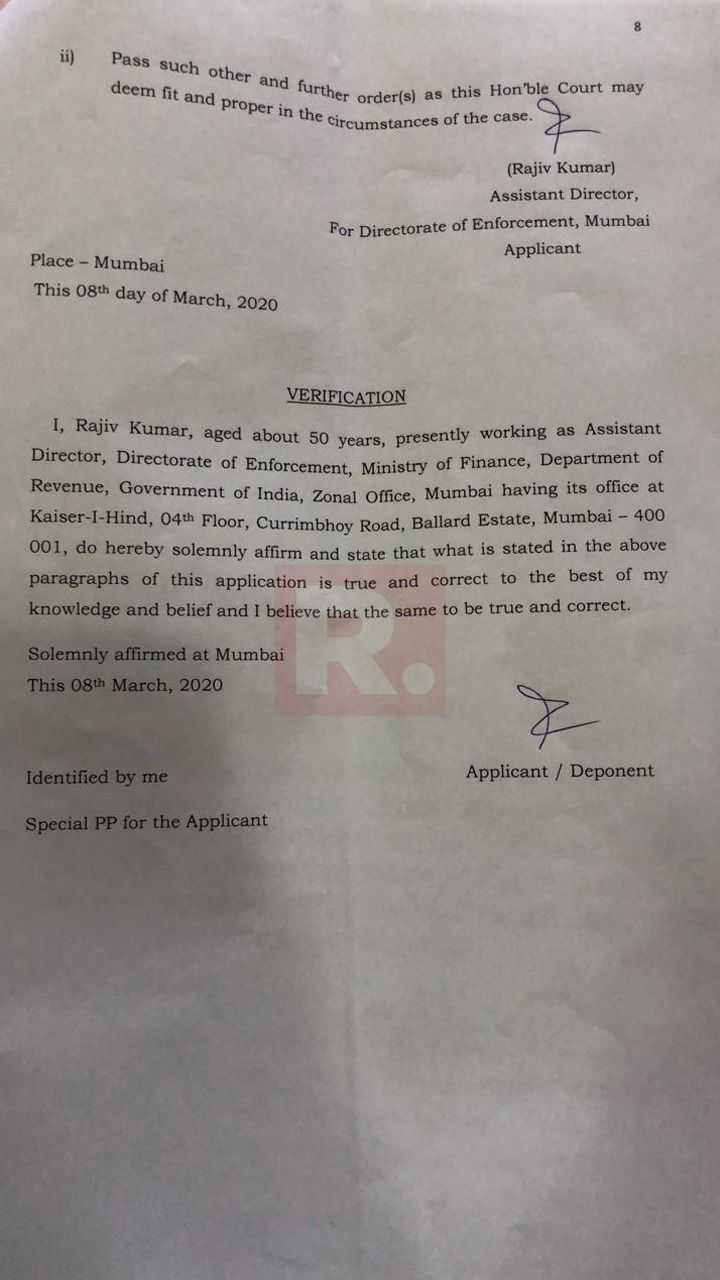 This was at a time when Yes Bank had given a loan of over Rs 3,000 crore to DHLF. Kapoor’s wife Bindu and his daughters — Rakhee Kapoor Tandon, Roshni Kapoor and Radha Kapoor — own several companies and allegedly received kickbacks from various corporate entities in exchange for the disbursal of loans by Yes Bank.

These kickbacks were allegedly routed through complex transactions involving promoters of DHFL. The loan amount of Rs 600 crore sanctioned by DHLF to DoIT Urban Ventures was actually the kickback for not repaying the loan to Yes Bank.

Meanwhile, ED is also examining the loan documents of Yes Bank and the terms on which it sanctioned Rs 750 crore to Dheeraj Wadhawan’s RKW Developers for a project near Bandra Reclamation.

In April 2019, the Income Tax department served a notice to Congress leader Priyanka Gandhi for the house she purchased in Shimla asking her to give the source of funds. She had shown an income of Rs 4.6 crore of which Rs 2 crore was made by selling a painting of Rajiv Gandhi (an MF Hussain painting gifted to Gandhi). The painting was purchased by Yes Bank founder Rana Kapoor. Also, the sale of some family artifacts and loans she had taken.

PEOPLE HAVE PLEDGED SO FAR
Central govt directs FCI to provide food grains to NGOs helping poor amid lockdown
8 of 17 people who came in contact with Tripura's COVID-19 patient test negative for Coronavirus
Andhra Pradesh govt takes over 58 private hospitals across the state to deal with COVID-19
J&K: Jaish-e-Mohammed wiped out in apple town of Sopore after commander killed
New York sees highest single day death toll for second day in row, 779 dead in 24-hr
DO NOT MISS
LOCKDOWN TO BE LIFTED IN PHASES?
93 NEW MARKAZ CASES IN DELHI
BS YEDIYURAPPA ON LOCKDOWN
UP TO SEAL 15 DISTRICTS
ASHISH NEHRA ON YUVRAJ SINGH
BERNIE SANDERS SUSPENDS CAMPAIGN