The farmers had put up the National Flag on their tractors and other vehicles while marching on the roads at many places, including Haryana's Jind and Sirsa. 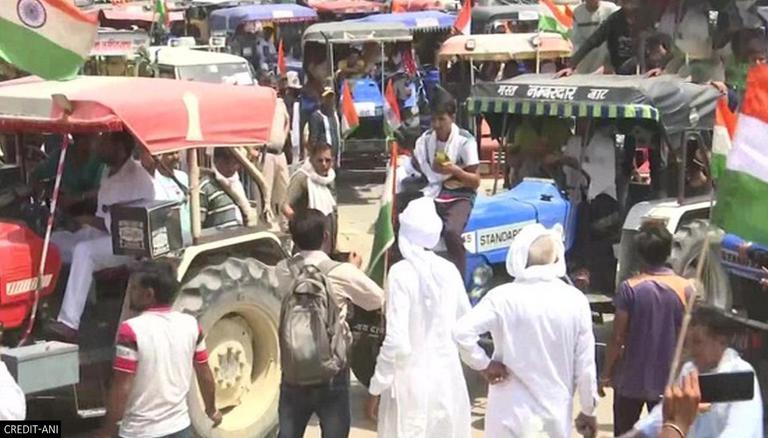 
Amid the Independence Day festivities, farmers protesting the Centre’s farm laws on Sunday took out “Tiranga Yatra” at several places in Haryana and Punjab to mark the occasion and demanded the withdrawal of the farm laws. Numerous farmers, including women, took part in the yatra across the northern states of India.

In Haryana's Kurukshetra, farmers held a tractor Tiranga Yatra from Pipli to Kundli Border. During an interaction with the media, farmer leader Gurnam Singh said, "As the country completed 75 years of Independence, we have planned to take out Tiranga Yatra from Pipili, which is said to be the place for farmer's revolution, Today, we named it as Kisan Kranti Chowk, because on September 10, farmers had to face the wrath of the police's lathi-charge. Many among us had sustained serious injuries in the incident; from here we will take the yatra to the Kundli border. We demand the repeal of three black farm laws."

Taking out the yatra from Haryana's Kurukshetra, farmers had reached the Singhu Border. The farmers had put up the National Flag on their tractors and other vehicles while marching on roads at several locations, including Haryana's Jind and Sirsa besides Punjab's Barnala and Bathinda, the farmers said.

In Jind's Uchana, women-led the protest and hoisted the National Flag at the local mandi. Protesting farmers said that they will continue to hold protests till their demand is met by the Centre. Bharti Kisan Union (Ekta Ugrahan) general secretary Sukhdev Singh Kokrikalan said that they observed ''Kisan-Mazdoor Mukti Sangharsh Divas'' at 40 places in Punjab. He said that they observed a two-minute silence in memory of the farmers who lost their lives during the struggle against the ''black laws''.
He slammed the Centre for not withdrawing the farm laws, claiming that it would adversely affect the farming community.

Another Tiranga yatra led by the farmers was held from the Attari-Wagah border to the Golden Gate in Amritsar.
Farmers, mainly from Punjab, Haryana and western Uttar Pradesh, have been camping at Delhi borders in protest against the three laws since late November last year. However, the government has maintained that the laws are pro-farmer.