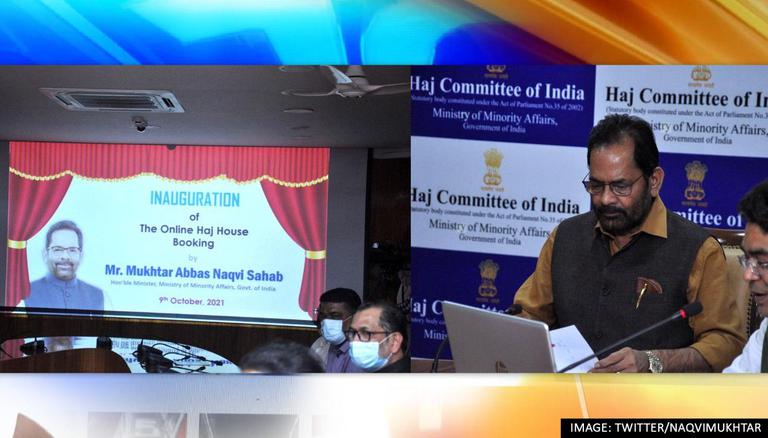 
The Union Minister of Minority Affairs Mukhtar Abbas Naqvi announced on October 9 that the complete procedure for Haj 2022 in India would be entirely digital. Minister Naqvi established an online reservation service at the Haj House in Mumbai on Saturday and subsequently claimed in a statement that India sends the second-highest percentage of Haj pilgrims after Indonesia. He further stated in his Twitter account, "The entire Haj 2022 process in India will be 100 percent digital."

Union minister also stated that the Haj process did not happen in 2020 or 2021. He revealed that Haj 2022 will be announced following discussions with several ministries during the next Haj review meeting, which will be held on October 21 in New Delhi.

The forthcoming Haj review meeting, which will be conducted in the national capital, will be attended by officials from the ministries of minority affairs, external affairs, health, as well as civil aviation. India's ambassador to Saudi Arabia, India's consul general in Jeddah, and other senior government officials will also participate in the Haj 2022 discussions, the minister added.

Union Minister Naqvi also informed that arrangements for specific training of Haj 2022 pilgrims on COVID standards, health and cleanliness have been planned in India and Saudi Arabia.

Arrangements for special training for Haj 2022 regarding Corona protocols and Health and Hygiene is being made in India and Saudi Arabia for the Haj pilgrims. #Haj2022 pic.twitter.com/DJw2xnkI1O

Over 700 women had registered for Haj 2021 without a 'Mehram' (male companion), while more than 2,100 women enrolled for Haj 2020 in the same category. According to Naqvi, if these women choose to go on the pilgrimage, their applications would be accepted for Haj 2022 as well.

The cost of completing the Haj is anticipated to increase

Meanwhile, as per The Star, the cost of completing the Haj is anticipated to rise as a result of rising inflation and new Saudi Arabian government restrictions, particularly following the implementation of Standard Operating Procedures (SOPs) in the wake of the COVID outbreak.

According to Deputy Minister in the Prime Minister's Department of Religious Affairs, Datuk Ahmad Marzuk Shaary, the SOPs includes the PCR examination and immunisation necessary to enter Saudi Arabia, and the capacity restrictions in buses, accommodations, and tents during the Haj pilgrimage.

In the month of September, Marzuk further stated that finance company Tabung Haji will announce the cost of completing the Haj for the 2022 season once everything is finalised.