A girl from Hyderabad has created Genius Book of Records by breaking 84 ceramic tiles in 84 seconds. She has set the record after 5 to 6 months of practice. 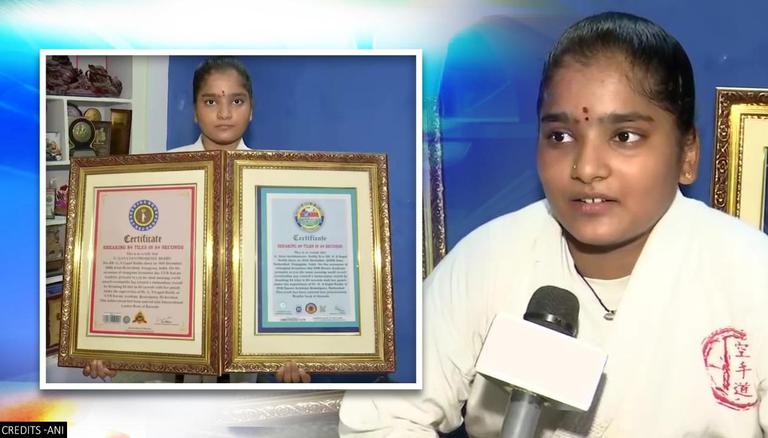 
A 13-year-old girl from Hyderabad entered the books of world records by breaking 84 ceramic tiles in 84 seconds on May 31. Karate black belt holder Gana Santoshinee Reddy set the record in 84 seconds to mark the 84th month of formation day of Telangana on June 2. Santhoshinee has many records to her name, including the world record for the highest number of head rotations from side to side.

"As it has been 84 months since Telangana was formed, I decided to set a world record on May 31 by breaking 84 ceramic tiles by hand in 84 seconds," she told ANI.

Telangana: Gana Santhoshinee Reddy, a 13-year-old girl, entered Genius Book of Records by breaking 84 ceramic tiles in 84 seconds in Hyderabad on May 31

Santhoshinee told ANI that she has created the record by practising every day for about 5 to 6 months. She has also set a record of turning 3,315 heads in 39 minutes and this was her record. She received the Bala Surya Award for mixing dance, yoga and karate in a single performance in 2013. On the 5th Telangana Foundation Day in the year 2019, both Santoshini Reddy and her sister were honoured for their performance.

"I turned 3,315 heads in 39 minutes and this was my first record. In the year 2013, I received the Bala Surya Award for mixing dance, yoga and karate in a single performance."

Santoshinee while speaking to ANI said that karate is very important and it plays a very crucial role in women empowerment. She wishes to make her name in the sport and win International championships. She wants to become an IAS officer to serve the people. Her father Dr G S Gopal Reddy, who is a karate master and runs a karate academy in Hyderabad, is her teacher. Dr G S Gopal Reddy said that he was proud of both his daughters for their achievements and awards. He added that women should have confidence and should be able to defend themselves.