India is the third country, after the US and the UK, to vaccinate the highest number of people against COVID-19 infection, health ministry said.

India is the third country, after the US and the UK, to vaccinate the highest number of people against COVID-19 infection. In a Twitter statement, the health ministry revealed that more than 57 lakh or 5.7 million people have been inoculated across the country as of now. Detailing further, it said that 57,75,322 beneficiaries - 53,04,546 healthcare workers and 4,70,776 frontline workers - have taken vaccine jabs in 1,15,178 sessions till now. 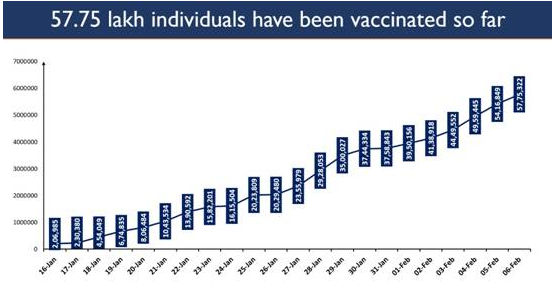 The UK and the US, both kick-started their ambitious inoculation drives in December, have vaccinated 10 million and 27 million people respectively. Meanwhile, India, which began its programme on January 16, is nearing 6 million jabs. Only on February 6, the country witnessed 3,58,473 people getting vaccine shots in 8,875 sessions. “There has been a sustained increase in the number of beneficiaries being vaccinated every day,” the ministry said in the aftermath. 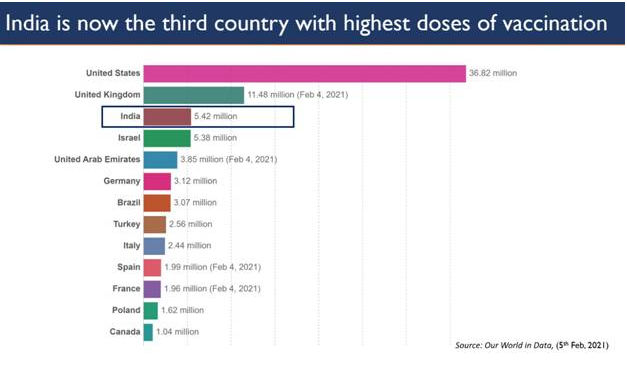 The ministry revealed that the highest number of 6,73,542 beneficiaries were from Uttar Pradesh, followed by 4,73,480 in Maharashtra and 4,59,652 in Rajasthan. Twelve states have vaccinated more than two lakh beneficiaries each, it added. The government has now asked states to speed up the process and schedule all its health workers for vaccination at least once before February end.

Meanwhile, the country has reported less than 80 daily deaths in the last 24 hours, the lowest in nine months. While the active caseload of COVID-19 still stands at 1.48 lakh, the recovery rate has also shot up 97.19 per cent. “Kerala has reported the maximum number of single-day recoveries with 6,178 newly recovered cases. 1,739 people recovered in Maharashtra in the past 24 hours followed by 503 in Tamil Nadu,” the government revealed. 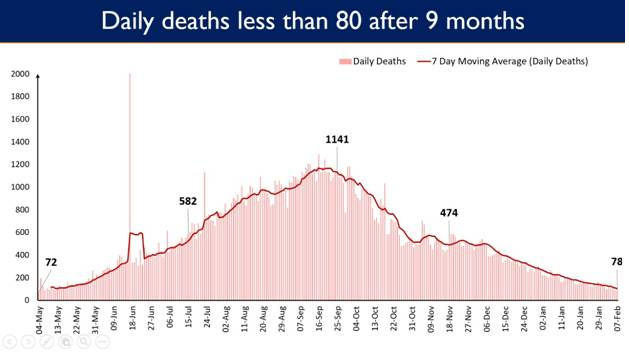 Meanwhile, India is also being lauded for its vaccine diplomacy and supply of vaccines to several countries. Talking about the same PM Modi said that India is deeply honoured to be a long-trusted partner in meeting the healthcare needs of the global community. According to a release by the Ministry of External Affairs (MEA), the Government of India has received several requests for the supply of Indian manufactured vaccines from neighbouring countries and key partners.

WE RECOMMEND
UK vaccine gambles paid off, while EU caution slowed it down
Iran: US' withdrawal from Saudi-led military offensive in Yemen does not end 'war'
US maintains firm stance on Turkey's purchase of S-400 Russian missile system
Former US Capitol Police chief blames aid, intelligence delay during insurrection
US: At least four skiers died in one of Utah's deadliest avalanches, police say