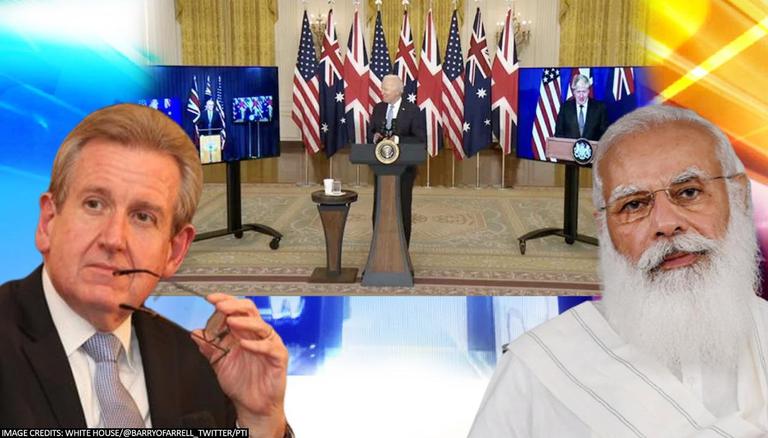 
Australian High Commissioner Barry O'Farrell on September 17 said that decision to form the trilateral defence partnership - AUKUS (Australia-US-UK) - was taken after deep consideration. While speaking about the AUKUS agreement, O’Farrell also said that Canberra had informed their Indian counterparts about the decision to form the pact, which would now equip Australia with nuclear-powered submarines.

O’Farrell said, “Australian Prime Minister, our ministers for Foreign Affairs and Defence have spoken to their Indian counterparts to inform them about the decision. The decision has been taken after deep consideration”.

It is worth noting that previously it was reported that Australian Foreign Minister Marise Payne and Defence Minister Peter Dutton called up their Indian counterparts S Jaishankar and Rajnath Singh on Wednesday to apprise them about the new partnership. PM Narendra Modi and his Australian counterpart Scott Morrison had also held a conversation the same day regarding the AUKUS partnership. However, India has chosen not to comment on the launch of the security partnership, which is seen as an effort to counter China in the Indo-Pacific.

This comes after the United States, UK and Australia on Wednesday announced the landmark defence and security partnership, AUKUS, intended to “protect and defend” their “shared interests in the Indo-Pacific”. The Australian envoy to India said that the decision was taken after an assessment of the capability required to meet a more challenging strategic environment. He said that the nuclear-powered submarines will now provide Australia with the “right capability”.

Meanwhile, the AUKUS partnership will facilitate sharing of various other critical technologies among the partner nations. The three countries will provide deeper information and technology sharing. It will also significantly deepen cooperation on a range of security and defence capabilities.

READ | AUKUS submarine row: France recalls envoys to US, Australia; calls pact 'stab in the back'

"Through AUKUS, our governments will strengthen the ability of each to support our security and defence interests, building on our longstanding and ongoing bilateral ties," a joint statement issued by US President Joe Biden, Australian Prime Minister Morrison and British PM Boris Johnson said.