Dr. Syed stated the ‘SAATH’ initiative will provide the women entrepreneurs of Self Help Group from rural regions with mentorship and handheld support. Read on. 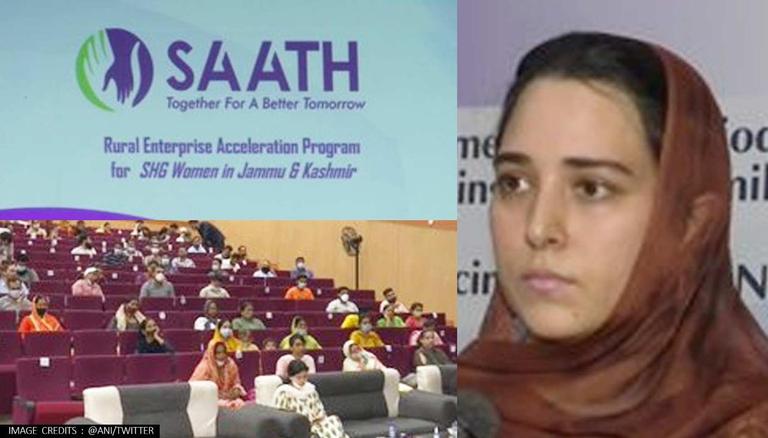 
The Lieutenant Governor of the Union territory of Jammu and Kashmir (J&K), Manoj Sinha inaugurated 'SAATH,' a rural enterprise developmental initiative for women in self-help groups (SHGs) in J&K. According to a press release, 'SAATH" is a project of the Jammu Kashmir Rural Livelihoods Mission (JKRLM), seeks to help rural women to gain economic independence and prosperity.

The mission director of JKRLM, Dr. Syed Sehrish Asgar stated that the ‘Saath’ initiative will provide the women business owners of Self Help Group from rural regions with mentorship and handheld support through exclusive capacity-enhancing workshops and one-to-one training for upgrading their business ventures nationally and internationally.

“According to our survey, Self Help Group women are providing employment to another 12,000 women. With 'Saath', they can offer jobs to almost 35,000 women,” Mission Director, JKRLM (21.09) pic.twitter.com/xOAucZGjrU

While talking with ANI, Dr. Syed said, "A total of 8,085 applicants across Jammu and Kashmir have applied for the programme." She further added that the greatest range of applicants has been received from the Kashmir Division's Baramulla District and the Jammu Division's Doda District. She also stated that 500 enterprises, 244 from Jammu and 257 from Kashmir Division, have the highest potential. She went on to say that these 500 enterprises have been selected for a focused training program accompanied by tutoring, while, on the other hand, 5000 business owners will be subjected to multiple business integration techniques such as e-commerce selling and branding.

Dr. Syed explained that 95% of the application for this initiative will be operated within the state, While the remaining 5% are said to be operating nationally. Whereas, 45% of applicants said that with the right support and guidance, they could recruit over 27,000 rural women in the next year. This will provide an average of 7.5 potential new jobs created per rural enterprise with assistance from SAATH. Similarly, the remaining 55% of applicants projected a fresh job creation potential of about 2 people per company, bringing the overall employment potential in the UT of J&K to over 35,000 people. Currently, about 12,000 people are employed by these 8000 SAATH program candidates.

READ | Other than Jammu and Kashmir, no major terror strike in India after Modi took over: Rajnath Singh

Dr. Syed also informed that JKRLM will establish a favourable ecosystem for these rural women's businesses, allowing them to reach their maximum potential of 35,000 employment and more in Jammu and Kashmir.

The Government has enlisted India SME Forum, a national resource organisation for Micro, Small, and Medium Enterprises, as an implementing agency and the agency has begun an orientation session in Jammu which will choose the rural women from the Jammu Division. These ladies are being trained by Prahlad Kakkar, a well-known advertising film director as well as other notable figures in the area. According to Kakkar, this is the nation's first effort of its type, and it will undoubtedly boost women's empowerment in UT.