Karnataka: Saffron Flag Hoisted Atop A Mosque In Belagavi; FIR Filed Against Miscreants

Amid the ongoing loudspeaker row, a saffron flag was hoisted by miscreants atop a Mosque at Ghataprabha village in the Belagavi district of Karnataka. 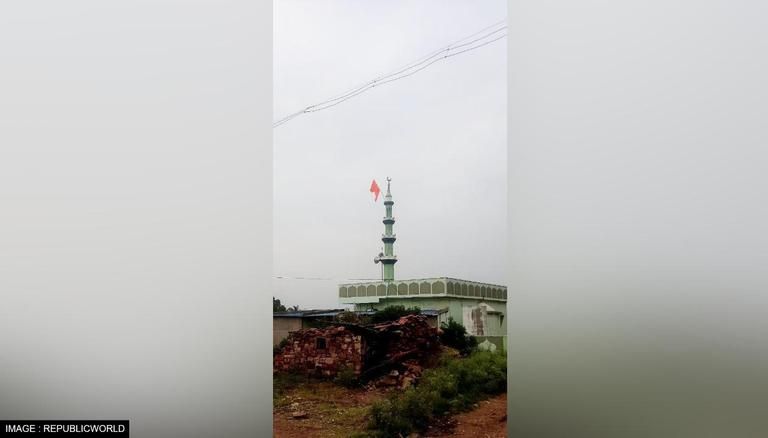 
A saffron flag has been hoisted atop a Mosque at Ghataprabha village in the Belagavi district of Karnataka. According to Republic TV's sources, the incident took place in the wee hours of Wednesday morning. The local leaders from both the Hindu and Muslim communities have later brought down the flag. Our sources have stated that an FIR has been registered against the miscreants who hoisted the flag at the Mosque. The local police are currently investigating the matter and are on the lookout for the miscreants.

The provocative act comes at a time when heckles have already been raised over communal matters in the state. After Karnataka Chief Minister Basavaraj Bommai ordered to take down all illegal loudspeakers across the state, Congress leader BK Hariprasad compared those who engage in Loudspeaker protests with 'terrorsists'.  On Monday, Karnataka Home Minister Araga Jnanendra told the reporters that CM Bommai held a meeting with senior officers in Bengaluru after several Sri Ram Sena activists were detained for playing Hanuman Chalisa to counter Azaan on loudspeakers. The Sri Ram Sene's chief Pramod Muthalik had vehemently opposed BK Hariprasad's remarks as well.

CM Bommai, while speaking to the media later in the day, asserted that the SC guidelines are applicable to everyone in the state. "I have asked all the senior officials to keep Supreme Court’s guidelines in mind and take down all loudspeakers of the state which are louder than the allowed decibels. The High Court of Karnataka has already given a ruling and I have asked all senior officials to thoroughly follow all orders," he said.

Sri Ram Sena (SRS) activists reportedly played Suprabhatam and Hanuman Chalisa on loudspeakers at several temples across the state since 5 a.m. SRS founder Pramod Muthalik, who arrived at the Anjaneya Swamy temple in Tripura Bhairavi mutt in Shivarampet in Mysuru before the crack of dawn, also offered prayers and played suprabhata on the loudspeaker. He also issued yet another warning as his organization's workers were detained in Bengaluru, saying "reduce the decibel levels, otherwise, we will act on our own."