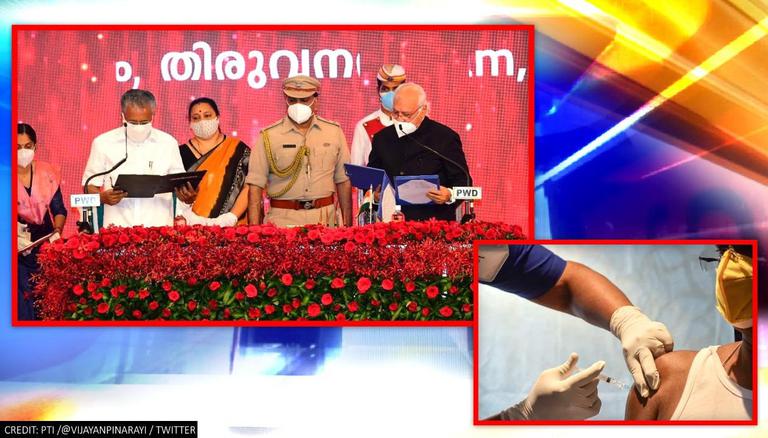 
Two days after taking oath as Kerala's CM for the second consecutive time, Pinarayi Vijayan on Saturday announced that the tent that was set up at Central Stadium in Thiruvananthapuram would be used to vaccinate priority groups. Kerala CM Pinarayi Vijayan received flak from certain quarters for organising a 500-guest swearing-in ceremony even as a statewide lockdown was imposed amid the battle against the second wave of COVID, with the Kerala HC even urging for the event to be made smaller. Taking to Twitter, CM Vijayan informed that the tent at the Central Stadium will be used as a vaccination facility & that KSRTC employees were inoculated on day one while other priority groups will be vaccinated in the coming days.

The tent that was set up for the swearing in ceremony will serve as a vaccination facility for priority groups. On the first day, KSRTC employees received vaccination. In the upcoming days, others will also be vaccinated there.

On Monday, the Kerala government announced a global tender for procuring three crore vaccine doses. Chief Minister Pinarayi Vijayan said the state has initiated steps to call for a global tender for sourcing the vaccine doses. "The tender notification will be issued today," he had told reporters. CM Vijayan said the vaccination of those in the 18-44 age group has started in the state. As announced earlier, vaccinations for those in the 18 to 44 age group will be first given to people who have a serious illness," he had said.

After winning a historic mandate, 20 LDF ministers along with CM Pinarayi Vijayan took the oath and assumed office as part of Kerala's 13th Legislative Assembly on Thursday. The Cabinet, which met for the first time after being sworn in by Governor Arif Mohammad Khan, swiftly began work to turn its poll promises into reality. The Vijayan-led administration has said that it will implement a programme to alleviate extreme poverty, which it says will come into force on August 15. The details of the programme are yet to be disclosed.

READ | Kerala: E Sreedharan keeps poll promise of ‘power for all’ despite defeat

The Test Positivity Rate stood at 22.63 per cent, a health department bulletin said. Malappuram accounted for the maximum of 3,932 cases, followed by Thiruvananthapuram with 3,300. Ernakulam and Palakkad also reported over 3,000 cases each. Of the new cases,123werehealth workers,21had come from outside the state and26,347were infected through contact. As many as 9,69,946people are under quarantine, including38,743in hospitals, the bulletin said. A total of1,26,028samples were tested in the last 24 hours, taking the cumulative to1,86,81,051 so far.