After inciteful religious slogans were seen being raised by a boy during a PFI rally in Alappuzha, Kerala police conducted a search op at the minor's residence 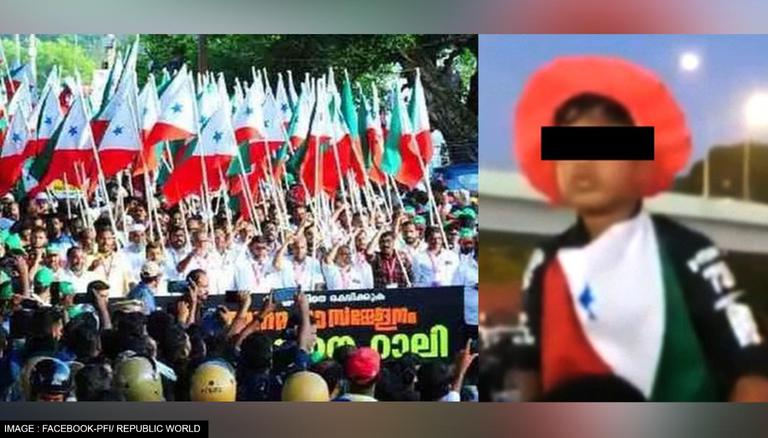 
After inciteful religious slogans were seen being raised by a minor boy during a popular Front of India (PFI) rally in Alappuzha, Kerala police conducted a search operation at the residence of the minor. According to inputs, the police are still unable to get hold of the boy even though they have been successful in identifying him. Notably, the boy has allegedly been untraceable at his rented house that is situated in Ernakulam for the past two weeks.

Republic has accessed a copy of the remand report according to which the boy was trained to call out inflammatory slogans during the PFI rally on May 21. According to the remand report, the accused minor planned to ignite religious sentiments by raising slogans. It is pertinent to mention that the boy was seen being carried by a man on his shoulders and the boy shouted provocative slogans. The reason behind shouting these provocative slogans was allegedly to stir up trouble amongst the crowd gathered at the rally, according to the report. Two of the three accused persons in the case have been identified as PFI office-bearers. The minor boy has been booked under Juvenile Justice Act and the police are still tracking him.

The Kerala Police filed an FIR against PFI Alappuzha district chairman Navasm, district secretary Mujeeb, and others after a man named Vijayakumar PK complained about the offensive slogans at the PFI's Alappuzha rally. They were charged under the IPC Sections 153A (Promoting enmity between different groups on religious grounds), 295A (Deliberate and malicious acts intended to outrage religious feelings of any class), 505(1)(b) (Act against public tranquillity), 505(1)(c), 505(2), and 506 (Criminal intimidation) and Kerala Police Act Section 120(O). Anas, a resident of Erattupetta, was detained on May 24 in connection with this crime.

The PFI highlighted in an internal statement sent to the public that such slogans were against the outfit's policies and vowed to look into it. C A Raoof, State Secretary of the PFI, said, "We have given approved slogans which were to be raised in the public rally at Alappuzha. Thousands of party workers and others joined the rally protesting against the RSS. The visual of a boy raising slogans came to our notice now. Those slogans were not approved or given by the organizers of the rally. It's not the policy of the organization to provoke or raise provocative slogans."