Telangana Minister KT Rama Ramo unveiled the statue of Colonel Santosh Babu in his home town Suryapet town, in remembrance of the martyr. 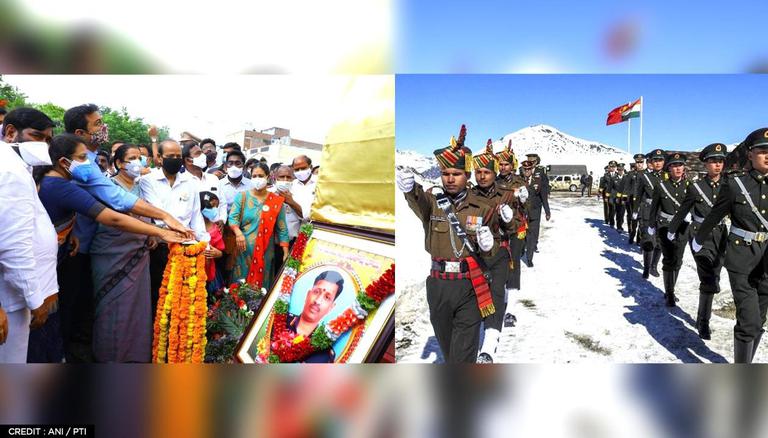 
In a heartfelt tribute to Colonel Santosh Babu, who made the supreme sacrifice while defending the country against Chinese intrusion, the Indian hero and martyr was honoured on Tuesday on the first anniversary of the Galwan valley clash between the Indian Army and the People's Liberation Army (PLA). Telangana Minister KT Rama Ramo unveiled the statue of Colonel Santosh Babu in Suryapet town, in remembrance of the martyr. Notably, Colonel Babu was a native of Suryapet, a small town about 140km from Telangana capital Hyderabad.

Colonel Babu, the commanding officer of 16 Bihar Regiment, was amongst the 20 Indian Army soldiers who attained martyrdom while combating Chinese troops in fierce hand-to-hand battle on June 15 last year in Eastern Ladakh. The incident, which flared up tensions between India and China, marked one of the most serious military conflicts between the two sides in decades.

The Telangana government had announced Rs 5 crore as ex-gratia to Colonel Santosh Babu's family, besides a government (Group-I) job to his wife and a residential plot in Hyderabad. Chief Minister K Chandrashekar Rao had then personally visited the residence of Col Babu and offered condolences. Colonel Babu was awarded the Mahavir Chakra posthumously.

The Ministry of Defense Public Relations Unit, earlier in the day, said that the Fire and Fury corps paid homage to the soldiers killed in the Galwan Valley face-off.  A statement issued by PRO Defence, Srinagar said in the face of unprecedented Chinese aggression, 20 Indian soldiers laid down their lives defending our land and inflicted heavy casualties on the PLA. It further informed that in a solemn ceremony, Major General Akash Kaushik, COS, Fire and Fury Corps, laid a wreath at the iconic War Memorial in Leh on the occasion.

Remembering the #Bravehearts of #Galwan

Maj Gen Akash Kaushik, Officiating GOC #FireandFuryCorps laid a wreath at #Leh War Memorial & paid homage to #Bravehearts who laid down their lives at #Galwan on 15 Jun 2020 while fighting for the #Nation.#IndianArmy pic.twitter.com/qMayWT8mhY

India's preparation after the clash

Following the clash, India held high-level talks with China, on diplomatic and military levels as well. The series of discussions had led to the de-escalation of tensions at the LAC and China's pullback from several territories as well. India has undertaken some major developments after one year of the Galwan clash. These include building infrastructure to enhance connectivity and deploying additional troops to tackle any possible aggression by the Chinese.

From the infrastructure point of view, the biggest achievements have been clinched by the day and night work of the Border Roads Organisation (BRO), and this connectivity has helped Armed forces to keep all their forward locations supplied throughout the year and given them the capability to deploy troops in no time there. Officials informed, "The Mathura-based One Strike Corps has been reoriented towards the northern borders in Ladakh and the 17 Mountain Strike Corps has been given the charge of the entire northeastern states along with providing it an additional Division comprising over 10,000 troops".